I once read that good collectors sell the bottom of their collection to pay for what they need. That seemed very shrewd and made me realize I was not a good collector, at least by this standard. It’s only in recent years that I’ve sold the bottom, or some of the bottom (doubles, triples, stuff I don’t want) to subsidize my new needs.

In the early ‘90’s, my interest in cards and my income were equally high, and I thought I’d begin to pursue one card of every Hall of Famer from when they were active. Of course I was covered from the 1950’s on (not counting Negro Leaguers, 19th Century guys and other similar cases), but I started in somewhat earnest. Within a few years that goal disappeared. I don’t think in a way that makes a personal collection of random cards, from various years, interesting to me. I don’t like things so open-ended and the failure of this effort underscored my collecting, and psychological, MO.

But I did get some nice pre-war cards, including two from the 1928 George Ruth Candy Company set of six. Thinking on it recently, I concluded that I don’t need two Ruth cards. One is plenty and selling the other would help me with my current needs. I listed it on eBay, ungraded, but I’ll likely get it slabbed by SGC. My gut tells me I’ll get $1250-1500, but who knows. I can’t even remember what I paid for it, though I know I bought both at once and I never spent a ton on anything. 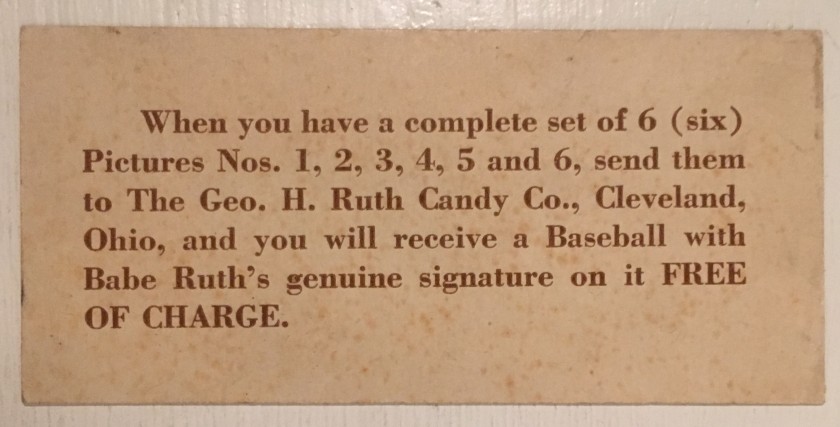 So is a 90-year- old Babe Ruth card in the bottom of my collection? Can’t be, right, but I’m not so sure. It’s an extra, though not a double. I’m never going to finish that set (nor do I want to) and, the more I think about it, the more I WANT to sell it. And that, realizing that a card could be a one of a kind in my collection yet still be disposable, is liberating.

About 15 years ago, I decided I really wanted autographed cards of ARod and Jeter. I’ve always like Rodriguez, still do, but never cared one way or the other about Jeter. I got a good deal on a signed 1993 Jeter Upper Deck rookie, with LOA. I think it cost around $75. Noodling around on eBay I saw that one sold in the neighborhood of $300 (listed there, best offer accepted). Once I saw that I was intrigued. (Thought you’d guys would like to see the page Jeet is on.) 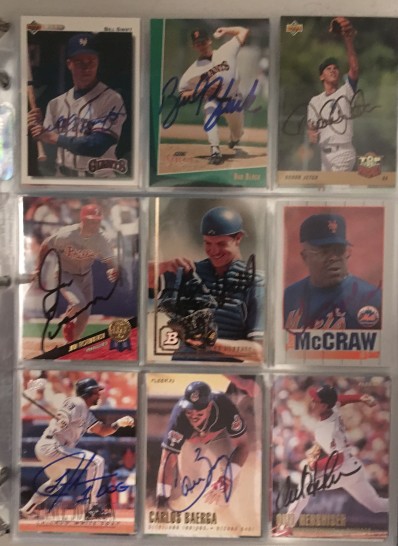 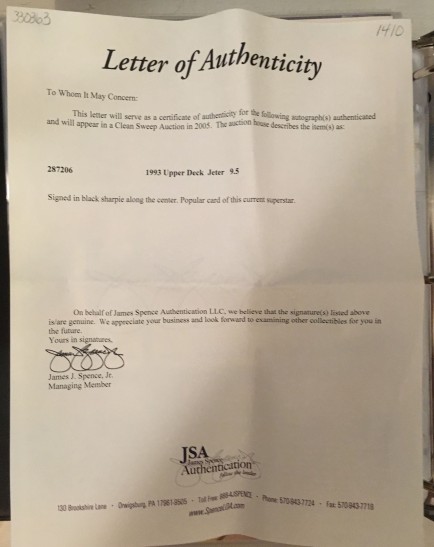 If someone walked into my house and said they’d trade me a 1956 Mantle in EX for the Jeter auto card and a couple hundred bucks, I’d take the deal (after saying “What the hell are you doing in my house?”). I know that to be true. Yet I’m having a harder time listing the card, getting the dough first, and then searching for the Mantle in the $450-500 range.

The jury’s still out on this. If I do list the Jeter, it’s going to open up the floodgates and I’ll look at what I have in a different light. There’s a lot in my collection that would qualify as “this is really nice, but I’d rather have that.”

Is that the bottom? I don’t know. I’ll let you know if I get there.

9 thoughts on “Dealing from the Bottom”