I have an affinity for oddballs. Even here at the SABR Blog, my two contributions have focused on Brewers Police cards and the Milwaukee Braves Spic-n-Span offerings from the 1950s.

My affinity for oddballs stems both from them being “odd” and in finding out about the companies that issued them. I started writing my own blog about 1980s Oddballs last year, and I thought that I would share one of the posts from that blog. This post is about a very small, weird set: the Bimbo Cookies Super Star Discs set from 1989.

INTRODUCTION TO THE SET
Bimbo Bakeries is a Mexico City-based multinational bakery known as Grupo Bimbo that is said to be the world’s largest bakery. The company was started in 1945 in Mexico City, perhaps coming about as the result of a name change from “Super Pan” (that’s super bread in Spanish) and grew quickly to become a huge corporation.

The name “Bimbo” — despite its less savory connotations here in the US — has an etymology that is checkered at best. Wikipedia says that the most likely hypothesis is that it is a mashup of the word bingo and Bambi, though it may also mean baby in Italian and it might sound like the word that means bread in China.

Bimbo entered the US market in 1986 with the purchase of Pacific Pride Bakeries in San Diego. Since 1986, Grupo Bimbo has purchased Mrs. Baird’s Bakeries in Texas and, later, the rights to brands such as Oroweat, Entenmann’s, Thomas’s (the English Muffins), and Boboli. That established Bimbo in the western US, and its purchase of Weston Foods in 2008 made it the largest bakery company in the United States.

These days, Bimbo is known for all of the brands above and for owning Sara Lee. In addition, Bimbo sponsors the Philadelphia Union in MLS, Rochester Rhinos in the USL, Chivas de Guadalajara, Club América, and C.F. Monterrey in the Mexican soccer league, and C.D. Saprissa in Costa Rica.

With only 12 discs in a set issued only for one year, my choices are limited. 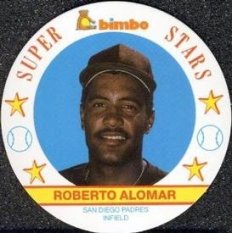 (Front and back images courtesy of The Trading Card Database)

DETAILS
As mentioned above, this set contains a total of 12 players. While the Standard Catalog says that the set contains a “dozen Hispanic players,” a little bit of research online reveals that the set actually includes a dozen Puerto Rican players. The discs are 2-3/4″ in diameter and are licensed only by the Major League Baseball Players Association.

Michael Schechter Associates printed and licensed these discs. As is typical for MSA discs starting in 1975 and ending when MSA stopped getting licensed by MLBPA, these cards do not include logos. Interestingly, this must have been before MLB started protecting its trademarks in team names since the discs include the team names in full on each.

The Bimbo bear appears at the top center of the disc. This bear is apparently the most well-known trademark for Bimbo, and Bimbo markets plush stuffed animals of the bear as a collectible for kids as well. Indeed, there are a ton more Bimbo bears on eBay than there are Bimbo discs.

Stats on these discs are lacking, as is also typical of MSA. You can see that you get the very basics — at bats, hits, homers, RBI, and average for the most recent year (1988) and for the player’s career.

HALL OF FAMERS
The only Hall of Famer out of the twelve is Roberto Alomar.

ERRORS/VARIATIONS
Trading Card Database does not list any errors or variations. But, as frequent SABR Blog contributor Jeff Katz noted to me on Twitter, the Roberto Alomar disc actually is a photo of his brother Sandy Alomar. I’ve sent a note to the folks at the Trading Card Database, but that is definitely an uncorrected error.

I've been a SABR member this time around since mid-2016, but I was a member in the past for about 10 years before that. I'm a Milwaukee escapee -- I'm no fan of winters, but I am a fan of the Brewers and the Braves (even if I know the Braves only from bedtime stories). View all posts by Dawgfan1995