What in the world are they hollering about and pointing at?

We’ll get to that in a moment.

The first set I was introduced to at age six was the Topps 1964 set. Card #413 caught my eye. “Johnny Keane, manager” for the St. Louis Cardinals. Maybe it was the colorful Cards uni or the fact I could see the inside of his hand cupped around his mouth. It’s a terrific piece of flash photography and in a galaxy of it’s own compared to portraits of graying former players leaning against a railing. At least Keane is actually doing some managing for crissakes! 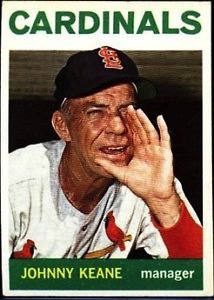 The Keane card sent me down a rabbit hole to capture some of my favorite manager cards from the past, along with some new gems I dug up.

Leave it to the hapless Cubs to come up with the hare-brained notion of the “college of coaches,” which started in 1960. After the Wreck of the Hesperus season of 1962, when the Flubbies recorded a super-stinky 59-103 campaign, Philip Wrigley decided a head coach could just as easily drive the ship into the iceberg as the whole gang. Kennedy’s action head coaching cards reveal much about the man and the trauma he suffered.

The ’63 Kennedy pictured is full steam ahead, icebergs be damned. He’s confident in his spring training garb, barking orders to his crew for the fight ahead, “By God, we’ve got Ernie Banks, Ron Santo, Billy Williams, Lou Brock, Larry Jackson and Dick Ellsworth! The sky’s the limit!” Huzzah! The 1963 Cubs went 82-80, good for 7th place in the NL. Would there be better days ahead?

“You guys look like Molly Putz out there! Snap out of it!”

The 1965 Kennedy card says it all. Here is Kennedy, baking under the Arizona sun and his head being driven in his shoulders by the weight of expectations for continued success. He’s holding his hat off his head wondering how in the world he’s supposed to win with 2/3 of his outfield manned by the immortal duo of Billy Cowan and Len Gabrielson (Cowan wasn’t horrible: 19 HR, 50 RBI, 16 doubles, 4 triples in 139 games, but a .268 OBP, BA of .241 and whiffing 25% of the time can be tough on a guy. Cowan also wore the mill stone of “Clubhouse Lawyer” around his neck for much of his career, playing for a total of 6 teams in 8 years). The cavalry was supposed to arrive in the infamous trade that sent the struggling Lou Brock to the Cardinals in exchange for a washed-up and injured Ernie Broglio. It never got there, as Kennedy and his furry flounderers went meekly into that good night with a 76-86 record, in eighth place. 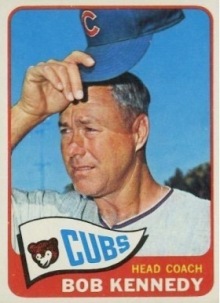 Perhaps Kennedy could have used the sagacity of the 1963 Keane, who went from managing St. Louie to the Yankees after his Cards whupped the Bronx Bombers in the 1964 World Series? Alas, it was not a good fit, as the aging skipper had zero control over a clubhouse of wild party animals and free spirits like the Mick, Whitey Ford, Pepi, and Jim Bouton. Keane delivered an odious cadaver, finishing 6th, the Yankees’ first losing season in 40 years. When the Yanks barfed on themselves to start the 1966 season, going 4-16, Keane and his barf bag were sent packing. 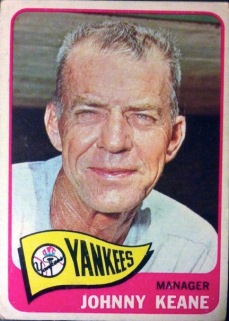 “What was I thinking? I should’ve stayed in St. Louis with Bob Gibson, Curt Flood, and Ken Boyer.”

Then there is the manager who was also a time traveler: Connie Mack. The 1951 Topps All-Star card pictures Mack resplendent in his suit and tie, and telling us the man was born in 1862. 1862! The guy was alive during the Civil War and managed from 1896-1950. The Mack in the ’51 card is sporting some killer two-toned dress shoes and appears to be ambling his way to the nearest Blue Plate Special.

Walter Alston always appeared in my ‘60s baseball cards like an old fart battling weekly brain aneurysms. How wrong I was. Walt was a tough SOB who challenged slug-a-bid players and recalcitrants to fistfights. He’s got his right index finger extended and looks like last night’s crab louie didn’t settle well in his 1962 Bell Brand beauty. He is much more cheerful in his 1972 Peter Max-infused Topps card, smiling the smile of a man who knows retirement isn’t far off.

And who is the man who would be king when Alston rode off into the blue? It’s Tommy Lasorda, who is quite active in his Topps cards of the 80s, gesticulating like a man ordering waiters around at an Italian restaurant. The 1988 Topps shows Lasorda after he’s polished off two deep-dish pizzas, a plate of spaghetti and meatballs, and a carton of chocolate ice cream with some garlic dip on the side. You wouldn’t be able to move either, which is why baseball’s greatest gourmand is pictured seated in a golf cart.

“I’d like to order another plate of rigatoni and clams, please.”

I could die and go to Heaven if there was ever a card of the Seattle Pilots’ Joe Schultz in action, or at least hefting a can of Bud in one hand and a liverwurst sammich in the other. We’ll have to settle for this faux 1969 card instead, as Joe looks out to the field wondering why rookie Lou Piniella is such a huge red ass.

The Little General, Gene Mauch, used to have a sign on his desk when managing the Phabulous Phillies of 1964, “Isn’t this a beautiful day? Watch some son-of-a-bitch louse it up.” The sardonic hilarity continued when he made the trip to Montreal, as his 1970 Topps card suggests. Left arm extended, Mean Gene is no doubt showing the way out to a failed Expos pitcher.

I was pleased to find not one, but two cards of John McGraw. The Topps 206 from 2002 features a fusty, colorized Muggsy making a point with his right index finger. His 1911 Conlon beauty might be the greatest of manager action cards: cap pulled low, on the field, legs apart, left knee slightly bent; his right arm is extended as if delivering a right cross to Jack Johnson. By Gar, this is a manager worth his salt. 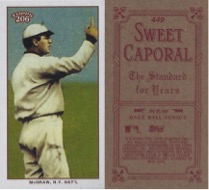 Managers in action baseball cards I would have loved to see that don’t exist (or couldn’t find): Earl Weaver and Billy Martin bench jockeying opponents and tearing into umpires. Oh well, I’ll always have Bob Kennedy.