Last month I gave a presentation titled “The Andy Warhol Triple Play” at the SABR48 conference in Pittsburgh. The name refers to the three major baseball artworks that Warhol painted during his prolific career.

Most importantly for members and fans of this blog the idea to research this topic began with a baseball card.

Or more accurately a silkscreen based off of a baseball card design. 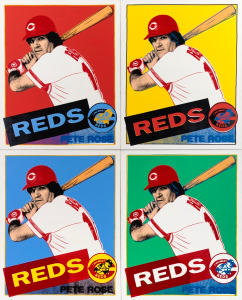 When I saw this image the geography synapses somehow connected Warhol to Pittsburgh and continued to SABR48 which was held at the home of the Pirates. I then vaguely recalled seeing “Tom Seaver” (1977) at the Baseball Hall of Fame in Cooperstown a few years prior and started wondering about Warhol & Baseball.

I quickly found that Kristin Spangenberg of the Cincinnati Art Museum had previously curated an exhibit of Warhol’s baseball art in 2015 to coincide with the city hosting the MLB All-Star Game. It tuned out there was a third Warhol painting simply titled “Baseball”. All of the sudden I had an idea: Three Baseball Paintings + Andy Warhol = Andy Warhol’s Triple Play.

I have chronicled each of the pieces separately on my own blog Phungo. Here are links to the related pieces

Twenty minutes may seem like a long time to talk about anything but when it comes to baseball most of us can drone on for hours. This was the case with the Andy Warhol baseball paintings and myself. I ended up cutting about 100 slides down to a few dozen, and I had to race to get through those.

When this happens something inevitably has to get dumped. This includes some very good stuff – after doing the research and living with the subject for a while it is similar to seeing a favorite player get released.

I am referring to this leftover information as “Extra Innings”. I have written columns on these missed subjects over at Phungo. So far postings have discussed the original photo Andy Warhol used for “Pete Rose”, A few of Andy’s Tom Seaver Polaroids, and the various flavors of the “Tom Seaver” portrait.

For various reasons I ended up purging the best Pete Rose anecdote.

Originally there was supposed to be a Pete Rose sitting, similar to what Andy Warhol did with Tom Seaver. Unfortunately in 1985 both Andy and Pete were pretty busy – and to be honest, I don’t think Rose was much of a sitter.

Warhol agreed to do the portrait from a series of photographs.

Andy got the pictures and he was perplexed. He called Carl Solway, the man who had commissioned the artwork with a question:

What happened next was described by SI scrbe Kostya Kennedy in “Pete Rose: An American Dilemma”

When Carl Solway related the story to me he mentioned that after finding out that “Switch-Hitter” was a baseball term the artist became significantly more interested in the project.

Kostya Kennedy used this story to promote his book in various forums and you can see him discuss the anecdote on Seth Meyers show if you have hulu.

I plan to do more Extra Innings postings in the future. Most of the columns will appear at Phungo, but I expect to author the trading card related items here. From time to time I will Tweet items under #WarholBaseball.

I have always had a significant fear of public speaking – I am perfectly comfortable in a social setting, but yeah never had a desire to speak in front of a roomful of people … until I joined SABR and saw some great presentations.

I then realized I wanted to contribute something to the community.

If you’re a true amateur as I am, I recommend trying out a Speech/Communications group. I joined Toastmasters in advance of going to Pittsburgh. I only went to perhaps a dozen meetings prior to going to #SABR48 but the experience was very valuable.