Within a few months of John Kennedy’s inauguration in 1961, the expansion era in baseball begins–as the Los Angeles Angels and a new version of the Washington Senators (the original team moved to Minnesota) debut. Here is a look at the initial card for each of the first four expansion clubs, as well as the the first card with a player photographed wearing the team’s uniform. 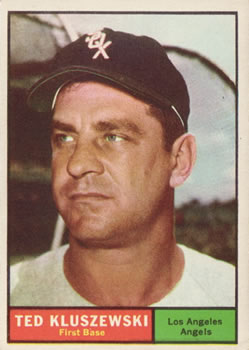 The first player to appear (by card number) as a Los Angeles Angel is slugger Ted Kluszewski, who is pictured wearing a White Sox cap in the 1961 Topps set. Ted is card #65 in the first series, so Topps may have only had time to change the team name before the print run. 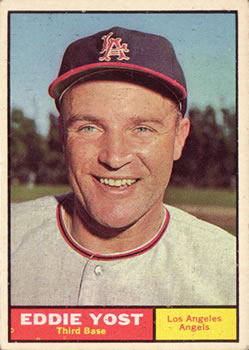 The Angels faithful had to wait until card number #413 in series five to see Eddie Yost in the team’s new livery. “The Walking Man” was the first batter in Angels history but struggled in two seasons with the “Seraphs.” Three other Angels were depicted in authentic Angel uniforms in 1961: Del Rice, Rocky Bridges and Gene Leek. 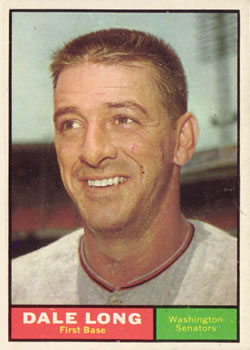 The inaugural card for the new Senators was that of Dale Long, #117 in the second series. The veteran Long is best remembered for hitting home runs in eight consecutive games in ’56 — which established a record since equaled by Don Mattingly and Ken Griffey Jr. Also, Dale played in two games with the Cubs in ’58 as an emergency catcher, even though he was left handed. 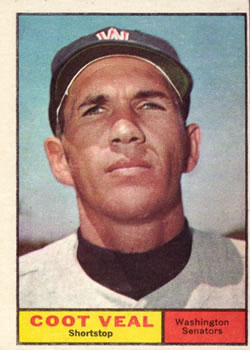 Coot Veal is the first expansion Senator photographed wearing the team’s cap and uniform. His card shows up in the 6th series at #432. The journeyman Veal had an unremarkable career but a very memorable nickname. There are five other Senators with photos taken in the newly minted togs: Harry Bright, Joe McClain, Pete Burnside, R.C. Stevens and Marty Kutyna. 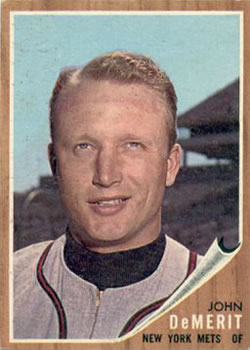 The following year, Topps wasted no time in introducing the card collecting world to the expansion New York Mets in ‘62 by placing Joe DeMerit at #4. Joe, a draft pick from Milwaukee, played outfield in 14 games with a .188 batting average. This lackluster performance marked the end of his short MLB career. 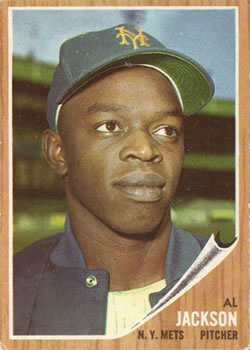 The first card featuring the royal blue Mets cap was # 464: Al Jackson in the 6th series. Al was a woeful Mets stalwart starting pitcher for five seasons, in which he lost 20, 17, 16, 20 and 15 games. Only one other 1962 card features a solo player in a Mets uniform, Ed Bouchee #497. Three “Rookie Parade” cards have headshots with players in Mets caps: #593 Bob Moorhead and Craig Anderson, #597 Rod Kanehl and #598 Jim Hickman. 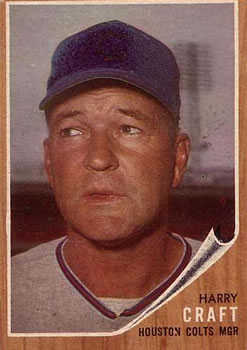 The new Houston Colt .45s were also given a card early in the first series, featuring manager Harry Craft at #12. Harry appears confused in this photo, but he will pull it together to manage the Colts during their first three seasons.

Apparently, Topps didn’t send a photographer to Houston’s spring training site or to the Polo Grounds when the Colt .45’s came to New York. Therefore, there are no cards in ’62 set with players wearing a Houston uniform. 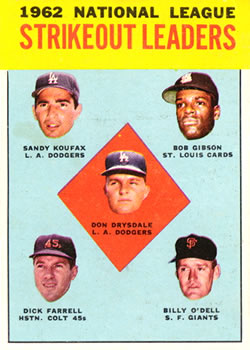 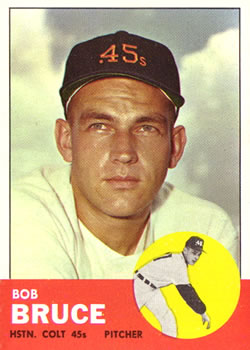 The first proper Houston Colt ’45 card is #9 in the ’63 set. The .45’s cap adorns the “floating” head of Dick “Turk” Farrell on the NL Strikeout Leaders. Fifteen cards later, Bob Bruce appears on the first solo card at #24. Bruce spent several years in Detroit before closing out his career with the .45’s in ‘62.

In a future post, I will continue to “expand” your knowledge with a look at the first cards in the second wave of expansion. This will be done not because it is easy, but because it is hard!