This campaign slogan became reality on election night in 1968. Richard Nixon was a genuine baseball fan, but the new President may have found reading the standings a little “tricky,” since Major League Baseball launched the second wave of expansion and divisional play in ‘69. The American League replaced the recently-departed Athletics with the Royals in Kansas City and ventured into uncharted territory with the Seattle Pilots. The National League followed suit by planting the Expos north of boarder in Montreal and the Padres just over the border from Mexico in San Diego.

In part to accommodate the four new teams, Topps produced its largest set to date: 664 cards. Also, (after a lengthy battle,) they reached an agreement with the Major League Baseball Players’ Association, thus allowing photographers to capture the infant clubs in their new uniforms and caps. However, these photos didn’t appear until the fifth series, so it’s bare headshots and airbrushed insignia in the first four series.

Ironically, the first Expos card (#22) features a player who never played for Montreal: Jesus Alou. Many of you remember that the youngest Alou brother was sent to Houston as part of the deal that salvaged the Rusty Staub trade, after Donn Clendenon refused to report to the Astros.

Drafted by the Padres from Pittsburgh, pitcher Al McBean has the honor of being Topps’ initial “Friar” with card #14.   The Virgin Island native was only a Padre briefly. After appearing in one game, he was dealt to Dodgers in April of ’69.

Veteran Dodger outfielder Al Ferrara is the first player to don the Padres distinctive brown and gold on card #452. Al was a starter during the first two seasons, proving to be one of the Padres most consistent hitters. Of course, Ferrara’s biggest claim to fame is appearing on TV in episodes of “Batman” and “Gilligan’s Island.” Other players in authentic Padres uniforms that year are: #506 Rookie Stars: Breeden/Roberts, #637 Rookie Stars: Davanon/Reberger/Kirby and #659 Johnny Podres. Yes, Podres of the Padres. 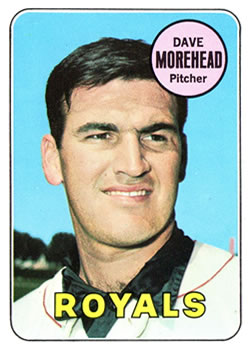 Former Red Sox phenom Dave Morehead holds the distinction of being the inaugural Royals card at #29. Morehead tossed a no-hitter against Cleveland in ’65 but a shoulder injury derailed a promising career. Dave lasted two seasons with Kansas City before his release in ’71.

Card # 463 shows pitcher Dennis Ribant in a Royals uniform from spring training ’69. But, Dennis never wore the royal blue during the championship season, since he was traded to the Cardinals before the late in spring training. Other “real” Royals: #508 Drabowsky, #529 Kirkpatrick, #558 Burgmeier, #569 Billy Harris, #591 Hedlund, #619 Rookie Stars: Pat Kelly, #632 Warden, #647 Wickersham and #662 Rookie Stars: Drago/Spriggs/Oliver.

It goes without saying that I could prattle on about the Seattle Pilots incessantly. So, I will self-edit and limit my commentary about the first Pilots player on a card: Mike Marshall (#17). The eccentric Marshall was in the Pilots original starting rotation but struggled, resulting in a demotion to the minors. Marshall eventually becomes a multi-inning relief pitcher, winning the Cy Young for the Dodgers in ’74, appearing in a record 106 games.

By the time I “ripped wax” on the pack containing card #482, Jim Gosger was probably already traded to the Mets-having been sent as the “player to be name later” for Greg Goosen. Jim is pictured wearing the basic Pilots spring training uniform. The undeniably unique uniforms, complete with captains’ stripes and “scrambled eggs” on the cap bills, would not debut until opening day. There are five other “immortals” who are photographed as Pilots: #534 McNertney, #563 Pattin, #612 Aker, #631 Kennedy and #651 Gil.

Although a “silent majority” of blog readers wishes they could “kick me around some more” for continuing this series, I will not allow my topic judgement to be “impeached.” Thus, “resign” yourselves to the coming third installment and “pardon” my obsession.

In closing, if you decide to purchase some of these cards, make sure to buy only from trusted sellers. After all, you want a dealer who can proclaim: “I am not a crook.”