I have often said that I learned baseball from baseball cards. I learned the teams, and everything important about the players. I learned what they looked like, their statistical record, how tall they were, where they were born, and — if Topps was feeling whimsical — whether they liked rock ‘n roll records or bowling.

Its different today, of course. Kids today don’t need baseball cards to learn about the players — its all on-line, and if they want to dig deeper they can reach out to the players on Instagram.

In this post (and hopefully a few others) I am going to go through Willie Mays’s baseball cards and imagine what a child of the 1950s (or later) would have learned with these as his or her primary source. I will only consider the major flagship sets, at least for now, although I reserve the right to cheat if the mood strikes.

Most of Mays career was before my card collecting days, but there might be people out there for whom this exercise is more than hypothetical. Let’s give it a try. 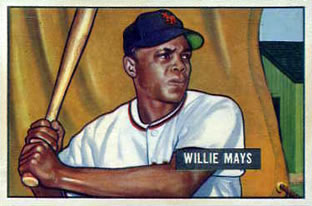 Mays looks like a big strong guy, though he is actually not particularly big. (This is the same height and weight on baseball-reference.com today. Ordinarily I would scoff, but Mays honestly looked the same size for 23 years.)

Mays did not get called up until late May 1951, but Bowman had his accurate minor league details (.477!) and got this card onto store shelves later in the summer. His stint in the Negro Leagues in 1948 is not mentioned, but his brief pedigree was still quite impressive.

Once again Bowman put out this card late enough that they could mention his late May army induction. We now learn his birthdate for the first time, and that he has shrunk 1/2 inch. Most importantly, the card implies a bit of his major league ability, with his “sensational fielding plays” and that he would be missed “throughout the league.” Both very true.

Topps reported Mays had won the 1951 Rookie of the Year award, a fact Bowman had not mentioned. Like Bowman, Topps’ 1952 Mays card came out late enough so that his army induction shows up. Topps had both his major league (1951 only) and minor league (parts of 1950 and 1951) records — including defense, which Topps eventually shunned. Also, we learned that Mays had brown hair and brown eyes, which you might think kids would not care about. You would be wrong. 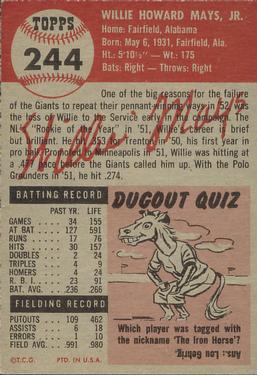 This was our first look at Mays’ entire body, and he looks as if he is fielding a base hit and is about to unleash a throw to third base to knock out the foolish base runner. We also get a look at his autograph — Mays has signed thousands of times in the years since, and this actually does look quite a bit like his later autograph.

Other than recording Mays’ brief 5-week stint with the 1952 Giants (before he went in the Army) there was not much for Topps to report. Their claim that Mays’ induction was a big reason why they failed to win the pennant holds up — they finished just 4 1/2 game behind the Dodgers, a gap one can imagine Mays making up.

Also, how do kids of today learn that Lou Gehrig was “The Iron Horse”? This seems a crucial part of a child’s education, but I can see this factoid falling through the cracks.

It has always been remarkable to me how much of an impression Mays made on baseball at a young age, before his statistical record made his greatness obvious. He was already “the greatest young fielder there is” after just 155 major league games, and his return for 1954 (he had missed the entire 1953 season) was considered by some enough to catch a Dodger team that had finished 35 games ahead of them. That is respect. 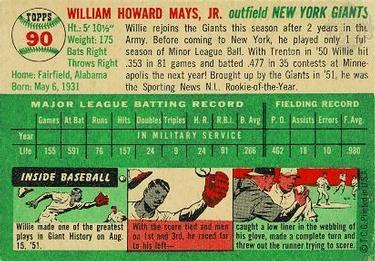 In my view this is the first great Mays card. For the first time this handsome man was smiling, and the card back is spectacular. The cartoon panels refer to a 1951 catch he made off of Carl Furillo and the subsequent throw to cut down Billy Cox at home. This is the same catch Bowman mentions on their card, though Topps’ version is much more dramatic. Also of note, Mays has gained five pounds, probably all muscle.

One thing I could have mentioned earlier. All of his early baseball cards claim that he was born in Fairfield, Alabama. Actually Mays was born in nearby Westfield but was raised in Fairfield. This was likely an unimportant distinction to most people, even Mays, but there you have it. 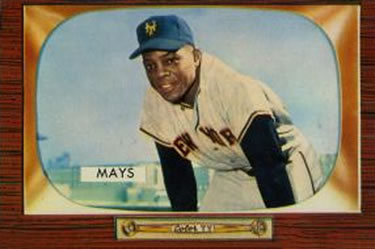 Many of the 1955 Bowman photographs were taken too far away for my taste, but the Mays photo is spectacular. For the first time, the effusive text on the back can not be brushed off as hyperbole — Mays had his first superstar season at age 23, and Bowman could therefore pick and choose which amazing statistics to highlight. The first four words — “Willie is the greatest” — could have suffice, but they had space to fill.

Topps was also up to the task of praising Mays, and used some of their real estate to mention the catch he had made in Game 1 of the recent World Series. Notice that Topps did a much better job of using the space on the back, as they had all the text and numbers that Bowman had and still had room to tell us that Sam Crawford had the all-time triples record. (He still does.) 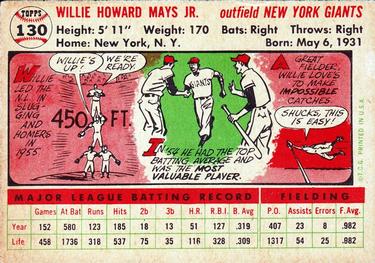 Topps used the same primary photo for three years running. After a few seasons at 175 pounds, a healthy post-Army diet has helped Willie return to his rookie weight. In addition, for the first time we learn that Willie lives in New York, this information replacing his birthplace on the back of his baseball cards. By this time, Mays has so many things one could brag about that Topps’ challenge was to pick amongst them. He *loves* to make impossible catches, and he apparently did so nonchalantly. Likely true. 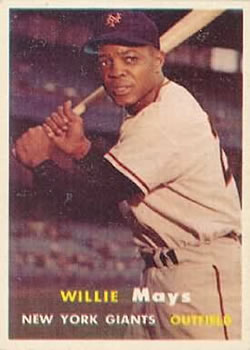 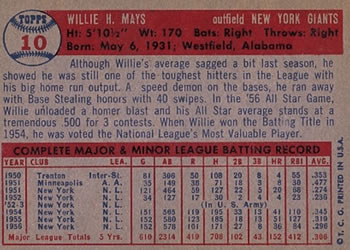 For the first time, Topps used beautiful color photography for its card set, and the Mays card could hang in the Louvre. Also for the first time, kids got a statistical line for everyone’s entire professional career. Consider for a moment the work it must have taken for the staff at Topps to produce a baseball card like this for 400 (and later more) players. The elimination of defensive statistics (at least for now) is no big loss, honestly.

You will notice that Mays’ birthplace is now Westfield, correcting a mistake made on his 1951-55 cards. Topps seems a little sheepish about Mays’s reduced 1956 batting output, but highlights the 40 steals as a way to soften the blow. Still, what’s not to love? 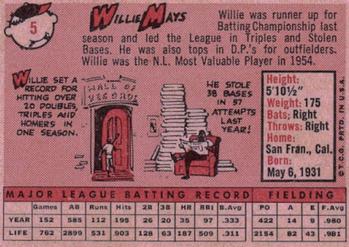 The Giants moved to San Francisco in 1958 and Mays — despite this card being part of the first series — had already moved his home? Topps had to employ a bit of trickery to draw the “SF” on Mays’s cap, made a bit easier with the upturned bill.

After one year of an expanded statistical record, Topps returned to their 1956 format of one year plus career, and re-added fielding stats. The left cartoon seems to imply that Mays was the *first* player ever to hit 20 doubles, triples and home runs. In fact he was the fourth such player (Frank Schulte, Jim Bottomley, Jeff Heath), and it has happened thrice since (George Brett, Jimmy Rollins, Curtis Granderson). Still impressive. 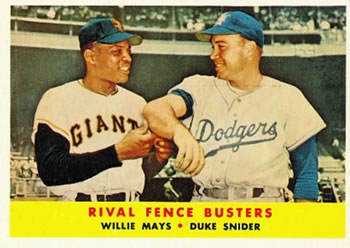 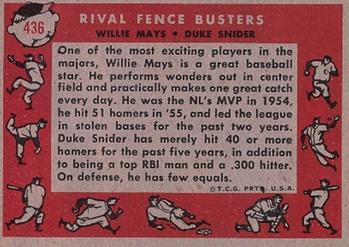 For the first time Mays was featured on a non-base card, and yes I am going to show these cards too. Although Mays seems to be checking out Snider’s muscles, Topps spends more ink on Mays’ accomplishments. I especially like the part about “practically” making a great catch every day. 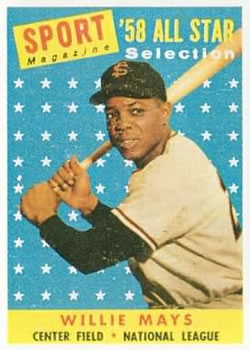 In Topps’ 1958 All-Star subset, they showed Mays’ performance against each of his seven opponents. The Pirates gave him the most trouble, a rare bright spot for an otherwise poor team. The text was apparently written by SPORT magazine rather than Topps, giving us a fresh set of superlatives. “Most electrifying.” It is telling that Mays’ extraordinary offense is often an afterthought in the praise. 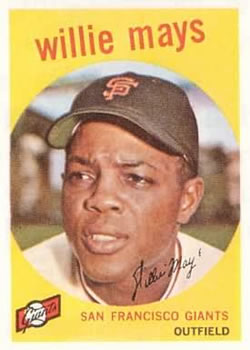 Honestly, what could be better than a cartoon of a thieving Mays being chased by a policeman with a nightstick? You might have noticed that on his 1954 card Topps tried (I think) to make Mays a black man, whereas they did not here. I am likely making way too much of this, but is it possible that Topps did not want to show a white cop chasing a black man with a club in 1959? My recollection from later years is that players were all white (or colorless).

Topps does a pretty good job making Mays and Ashburn into comparable stars. I am not complaining, this is appropriate on a card like this.

In 1959 Topps created a Baseball Thrills subset, and Mays’ catch got its own card. The Catch had been mentioned on his 1955 Topps card, but these three spectacular photos do a better job of showing kids what all the fuss was about.

Mays’ fourth card of the 1959 set is the first time his enduring nickname shows up. It was nice to see Topps focus on Mays offense for a change, if only for his .318 career batting average. The only active player with a higher average? Stan Musial at .340.

OK, this gets us through the 1950s, when both Topps and Mays took over the game. Until next time.

13 thoughts on “The Say Hey Kid: Willie is the Greatest”