After Pacific’s 1993 Spanish-langauge release, Topps decided to release its 1994 set in a Spanish-languague version as well. From what I’ve seen, the Topps cards were only released as a set and came with a special 10-card insert set of Topps Leyendas featuring various Latino baseball stars. 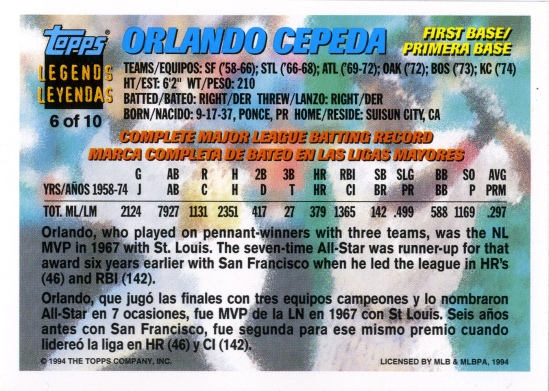 First, the Leyendas insert set. The less said about the front design the better but I do like that this is one of the only sets with bilingual fronts. The back though is wonderful. There’s some peak-90s fonts and colors but I love that everything is translated. Compared to Pacific’s preference for English-language statistics this is a wonderful change of pace. Some stats like At Bats, Hits, and Home Runs are (or can be) the same in both languages but most are not. 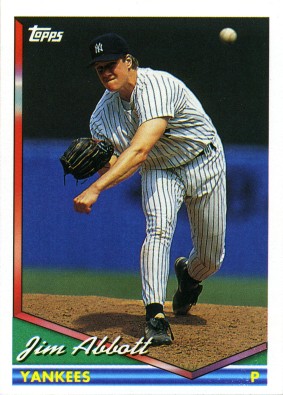 The base 1994 Spanish cards featured the exact same fronts as the regular ones. Even the Future Stars and Rookies cards are the same. So the only thing worth commenting on is the backs.

As in 1978 and the Leyendas cards, Topps has bilingual statistic headings. Does it make things a little busy? Yes. But it makes these cards that much more accessible to everyone. The only thing that still confuses me is trying to figure out what “JS” translates to for “Games Started.” I’d understand “JE” or “JC” but the only way “JS” makes sense is if “Start” gets borrowed into Spanish.

I also like how Topps uses izquierda in the bats/throws information but switches to zurdo in the bio information. Izquierda is definitely the word I learned in school. Zurdo on the other hand is one I’ve learned through watching and reading about sports.

Anyway this is a solid effort at bilingual cards and makes me wonder what might have been had there been no strike. Would Topps have continued releasing bilingual cards in the following years? It would’ve been very cool if they had.

Instead, from what I’ve been able to tell, we’ve been limited to Spanish-language variants. There have been a few Spanish-language Topps Now cards from the World Baseball Classic which I won’t cover on this blog but Topps has referenced its Venezuelan issues a few times.

While the Topps Heritage Venezuelan variants seem to only focus on print differences between the US-manufactured and Venezuelan-manufactured cards, Topps Lineage in 2011 had a Venezuelan insert set that resulted in Spanish-language versions of the main Lineage cards.

Unfortunately, Lineage’s backs are pretty boring and just feature a biographical paragraph. The translation is fine, if a bit literal, but doesn’t offer much to comment on. Still, it’s nice to see that Topps didn’t completely give up on the market after 1994.