In my last post, I went through Willie Mays’s Topps and Bowman baseball cards from the 1950s, to determine what a young kid of the time would have learned about Mays from the cards. I suggest you go read that piece now before we continue into the 1960s. 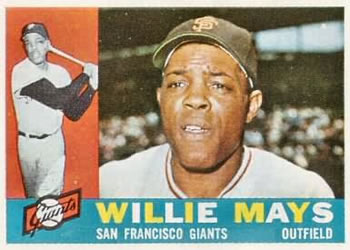 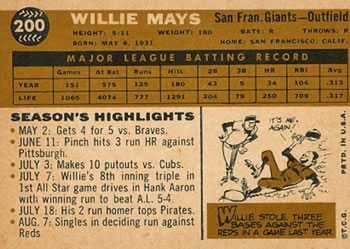 Although I did not mention this last time, in 1959 Mays’ reported height and weight both increased, putting him at a solid 5’11” and 180 pounds. His season statistics had become more of the same by this point, but in 1960 Topps simplified things (for all players) by simply highlighting some of his better games. In a game that did not make the cut: on September 17, with the first place Giants just a single game ahead of the Braves, Mays was 4-for-4 with a walk against Milwaukee including a three-run home run. Fun fact: Warren Spahn, going for his 20th win, failed to retire the first four Giants and was removed from the game.

Topps returned with a cartoon in 1960, and it is a classic. This is what kids lived for back then — a sliding Mays joking/trashtalking the poor baseman. Honestly, I sort of assumed that this actually happened. 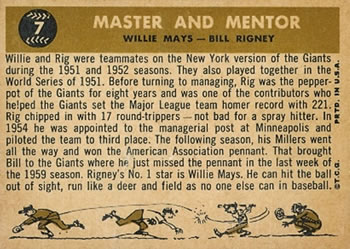 As you can see, Bill Rigney gets the starring role on the back of this card, with his big star rating only a handful of words at the end. True, its not like Mays did not get enough ink at Topps. 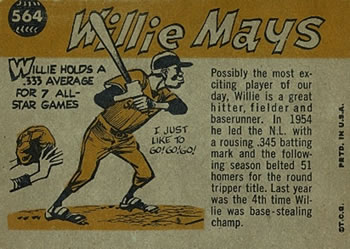 Pretty standard fare at this point. If anything the prose (“Possibly”) pulls its punches a bit from previous seasons. I will say that he looks more menacing than usual in the cartoon. 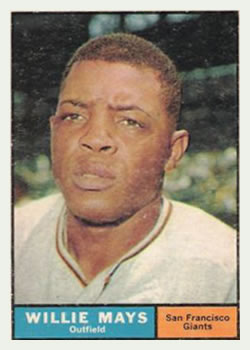 As you all know, Topps often took photographs of players without their hat on, and later used these photos if the player got traded and they didn’t want to show the old hat. I prefer this to the airbrushed hats, which were often comically rendered. Here the hatless photo is not necessary, but is nonetheless welcome. Mays is about to enter a period where he always smiled in his photos, a look he pulled off with aplomb. This card might be the most fearsome pose of all his cards. By all accounts a gentle man, he looks like he could pick me up and throw me over the moon. Which he probably could have. 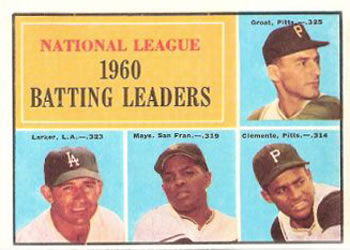 This is the year Topps introduced “Leaders” cards, first for HR and batting average and later adding RBI. Mays was a regular on these cards of course, and you will be seeing all of them. I hope the Norm Larker family hoarded this one.

Although Mays is having one great season after another, it is worth pointing out that his “baseball card numbers” (that many of us grew up with and therefore revere) underrated him considerably. Over the first 10 years of his career he won a single batting title and a single home run title, both of which Topps mentions regularly over the years. But because he did everything on a baseball field so well, he is better served by a stat like WAR, which tries to measure all of his contributions. Mays led the NL — which during his career boasted one of the greatest collections of superstar talent ever assembled — a ridiculous 10 times in baseball-reference.com’s version of WAR. Six times he put up 10.0 WAR, a feat managed not a single time by Henry Aaron, Frank Robinson, or Roberto Clemente, his justifiably revered peer group. In fact, during Mays’s entire career, only one other National League player ever managed the feat — Ernie Banks in 1959.

Never forget: Mays was the King of Kings.

A rather dull subset I think, never repeated, showing a handful of players who had won MVP awards in previous years. The hat is blackened presumably because he had won the MVP in New York and he was now in San Francisco?

This subset, on the other hand, was glorious. I preferred the 1960 All-Star backs, with the big cartoon, though a kid of 1961 would have had all this text to chew on. The last sentence, suggesting that Mays made multiple spectacular catches in the 1954 World Series might be an oversell. I think it was just one, though it was quite a thing.

Apropos of nothing, twenty-three years and change ago I got married here. My vows consisted of explaining the significance of Willie Mays’s 1954 World Series catch in Jane and my subsequent childhoods (neither of us were born at the time of the catch). Truth. The closer was my claim that on this day I was “making the greatest catch of all time.” Corny perhaps, but it fit the informal mood of the festivities, which also featured Bob Dylan, Laura Esquivel, Roger Angell and James Brown.

But enough about me.

The front of this card is simply spectacular, one of the most attractive photographs of his career. On the back, its is telling again how Topps relies on his batting title and home crown from years earlier as his most impressive accomplishments. In point of fact, Mays could have won the previous eight MVP awards. 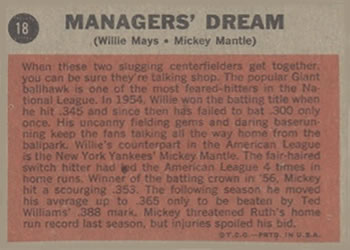 The first time the game’s two most popular and famous players ever shared a card (they would do so one other time), and it is a spectacular shot taken at the 1961 All Star game at Boston’s Fenway Park. As a bonus, Henry Aaron shows up to the far right. (Elston Howard and John Roseboro are also pictured.) Topps makes it seem on the back that these two stars get together regularly to discuss baseball philosophies, though this might have been limited to their many All-Star game appearances.

A pretty solid group, though I was never a fan of the floating head look Topps used for many subsets this season. For several years in the 1960s Topps used the back of their leaders cards to list the top 30 or 40 players in the specific category. I can’t express how cool it was in the late 1960s to see a guy with a .211 batting average make the leaders card. 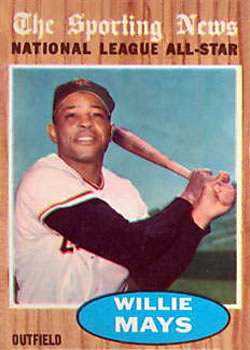 Topps had All-Star cards (a full lineup for each league) every year from 1958 through 1962, and of course Mays made it all five years. Also going 5-for-5 were Henry Aaron, Mickey Mantle, and Luis Aparicio.

Although his 1962 text continues to emphasize his 1954 and 1955 seasons, it does highlight the four-homer day he had the previous April.

In 1963 Fleer tried to enter the baseball market with its own set of current players, but after a single series they were stopped in court by Topps. Fleer’s 66 cards included Mays as card #5. No earth-shattering new information on the back, though their mild apology for Mays’s .304 batting average (despite 49 home runs) is rather amusing.

Here is Willie in the middle of a typical Candlestick Park fog.

On several of his cards, Topps touts Mays’s play in the All-Star game. Records are made to be broken and all that, but its hard to imagine Mays’s resume in the mid-summer classic ever being assailed. He played in 24 games, possible because there were two games per year from 1959 to 1962. He started 18 and played 11 complete games. Although he finished 2-for-21 over his last eight games, he still ended up over .300 (23-75) thanks to so many big games in mid-career.

For Musial’s final season, Topps got him together with Mays for this great card. Stan seems to be passing the torch to the younger star, who is now 32 years old but still the best in baseball. 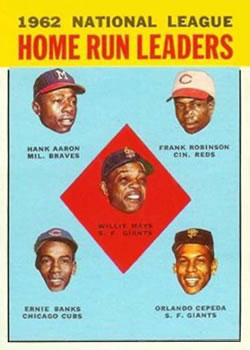 Five Hall of Famers on the front of the league leaders card ain’t bad. Anyone doubting the tremendous disparity of the two leagues at this time should just take a look at the AL version of this card, which features Leon Wagner, Norm Cash, Jim Gentile, Rocky Colavito, Roger Maris and Harmon Killebrew. Who chose these sides?

But if you are Ramon Mejias, you might consider framing the back of the NL card.

A fantastic card because Mays looks relaxed and unaware of the camera. The back of his cards have subtly shifted to placing him among the best to ever play the game, rather than just a star of the moment. 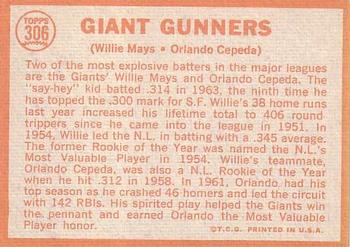 This photograph was undoubtedly taken within seconds of the one above (ED: this is false, and obviously so), showing the Giants’ other great hitter. Although Willie McCovey would eventually surpass Cepeda as a star, Orlando was the better player until he hurt his knee in 1965 and Willie took a huge step forward. Of note: Cepeda did NOT win the 1961 NL MVP award, despite Topps’ claim. Frank Robinson did. 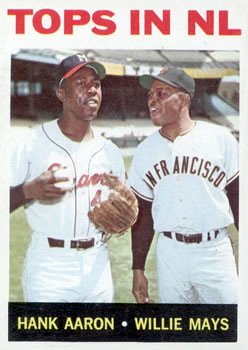 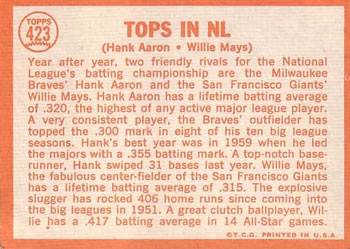 Certainly one of the greatest cards of All-Time. Of note is the fact that Aaron, who would become the All-Time home run leader, is praised for his batting averages and base stealing ability while Mays is the great slugger. If Aaron was underrated as a player it is because he shared a generation and a league with Willie Mays. 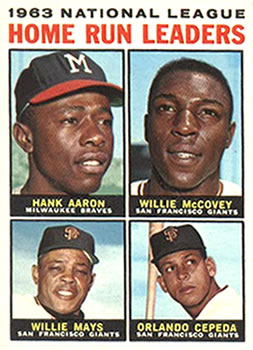 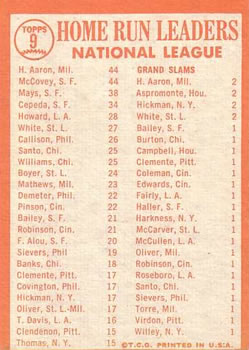 Another ridiculous card (AL version: Killebrew, Dick Stuart and Bob Allison. LOL). Gene Oliver has bragging rights on the back, but the most surprising name is probably Carl Willey, a Mets pitcher immortalized for his July 15, 1963 grand slam off Houston’s Ken Johnson at the Polo Grounds. 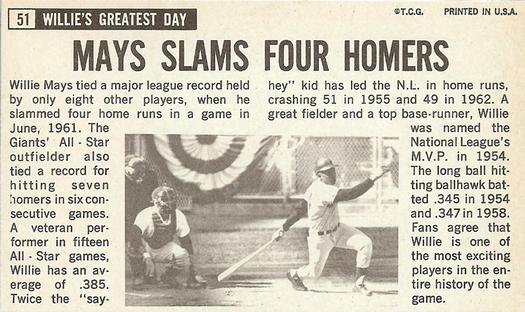 I wrote about the Topps Super set a couple of years ago. Every card is beautiful, and Mays might be the most beautiful. I haven’t dealt with oddball cards in these articles because they usually don’t have learning material on the back. This time Topps went all out with the text, most of which we have read before.

5 thoughts on “The Say Hey Kid: There Isn’t A Thing That Willie Mays Can’t Do”