On January 20, 1953, General Dwight D. Eisenhower became President of the United States. “Ike” and the First Lady, Mamie, scarcely had time to settle into the White House before the Milwaukee Braves debuted on April 13.

The “Brew City” offered a new, publicly funded stadium (County) located out of the downtown area with acres of parking. Since the Braves would always play “second fiddle” in popularity to the Red Sox in Boston and with financial losses mounting, owner Lou Perini pulled up stakes and headed for the upper Midwest.

However, the final approval to shift the franchise wasn’t given until March 18, 1953. Topps and Bowman had already produced Boston Braves cards. The two companies will have to add Milwaukee cards, but they take different tacks.

The first eight Braves in the Topps set are painted (like all 1953 Topps) Boston cards and are from “series” 1 and 2. The ’53 set was released in “waves” but not formal series with checklists. George Crowe is the initial Braves card numerically. Interestingly, he is shown with the Yankee Stadium “frieze” in the background, despite never having played in the American League. Spahn, Matthews and Sisti are amongst the others wearing the Boston “B” on their caps. 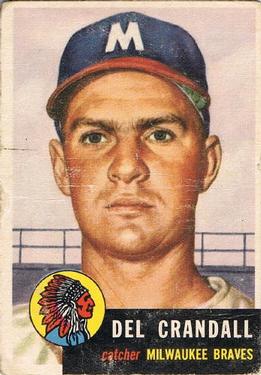 Del Crandall is the first Brave to represent Milwaukee — on card #179 in “series” 3. A plain block “M” has been painted on his cap to signify the new city. The six other Milwaukee cards also have the fake “M” insignias. As best as I can determine, there are no cards showing Braves wearing an authentic Milwaukee cap in ‘53. 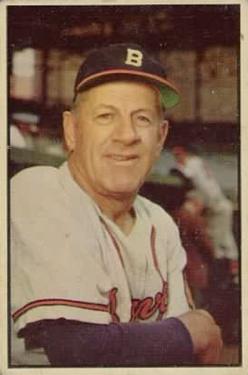 Topps’ rival, Bowman, produced a groundbreaking set utilizing color photography for the first time by a major company in ‘53. All the Braves in the set have Boston caps or with the insignia not visible. Perhaps Bowman didn’t want to mare this beautiful set with excessive airbrushing. There are three Braves depicted as being on Boston, with Sam Jethroe being the first coming in at card # 3. Manager “Jolly Cholly” Grimm is the first Milwaukee card at #69. Since this set has no lettering on the front, the back has the only indication of the franchise shift.

A set of cards with black and white photos was produced by Bowman as well. Bowman may have intended this set as a third series of color cards but decided to save money by not printing it in color. But, the cards are not a direct continuation of the color set, since they are numbered 1-64. All the Braves cards have Milwaukee on the backs, which lends additional credence to the idea that this set was printed last, with the intent to use it as a final series. As with the color cards, the Braves either have a Boston “B” on the caps or the insignia isn’t visible.

Since Topps still used colorized photos in ’54, it is difficult to know definitively if the first Milwaukee Brave in the set, Del Crandall, is wearing a real Milwaukee “M.” I speculate that it is authentic, since the “M” font is correct and there were many photos taken of Del in ’53. (The accompanying photo used for the “Spic and Span” set is an example.) The next six Braves cards could possibly be airbrushed, but the speculation stops with card #128: Hank Aaron.

As many of you know, one of the leading authorities on sports images is one of our most well-known committee members: Keith Olbermann. In an exchange of emails, he sent images of Aaron from a March 18, 1953 photo session for the Milwaukee Journal newspaper. The position of the cap and exposed forehead clearly indicates that the Topps card image is from this photo session. Furthermore, I found another image on the Wisconsin Historical Society website that was taken seconds before or after the card picture.

I learned from Olbermann that — to the best of his knowledge — Topps didn’t take their own photos until at least ’56. Instead, they relied on team or press produced shots. This explains how the Milwaukee Journal photo ended up on their 1954 card.

Additionally, Olbermann pointed out that Joey Jay and Mel Roach signed with the Braves in ’53. Their card photos are undoubtedly from ’53 as well. 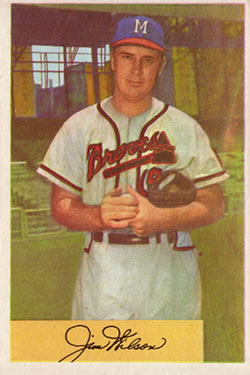 Bowman doesn’t use the same vivid, color printing process in ’54 as ‘53, resulting in washed-out images. Thus, the “M” on the caps is not crystal clear. However, I believe that card #16, Jim Wilson, was taken during the ’53 season — since several of the Braves cards use photos taken at the Polo Grounds with similar poses and lighting. Johnny “Yatcha” Logan (#80) is definitely from ’53, due to the photo being taken at County Stadium in Milwaukee.

The Eisenhower era of the ‘50s was a “brave” new world in many respects, including the shifting of long established franchises to new cities. The Browns, Athletics, Dodgers and Giants all followed the Braves gambit. The nation liked “Ike” (not Delock), and I would like you to prepare for the next installment in my quest to pin down the first card for each transplanted team.

Please let me know if you have evidence that disproves any of my speculations. The cards that made Milwaukee famous may have made a fool out of me.

One thought on “The Cards That Made Milwaukee Famous”