Part II of my series about a neglected feature of baseball cards—the material on the back of the cards—continues with the 1960 Topps set. (For Part I, read here.) To my knowledge, this was the third and final “regular” Topps set where the front of the card was in landscape (horizontal) mode, rather than portrait (vertical) mode; the others were 1955 and 1956. So right away, it’s an unusual set. The card fronts feature a large head shot of the player along with a smaller “action” shot, something that Topps did a few times over the years (also 1954-55-56-63; in 1983-84, the head shot was the smaller one). Here’s the front of card No. 1 in the set, 1959 Cy Young Award winner Early Wynn of the White Sox.

As for the backs of the cards, the 1960 set marked one of the last times that Topps opted to present stats only for the player’s previous year and career, rather than a year-by-year rundown. What makes the set unique was how Topps used the extra space made available by skipping the rundown. Along with a cartoon highlighting something about the player, the 1960 set featured bullet points with highlights from the player’s 1959 season. Here is Wynn’s card back.

Here’s the card back for another of the big stars featured in the set, 1959 National League MVP Ernie Banks.

The bullet point idea worked very nicely for players like Wynn and Banks who had a lot of 1959 highlights. Topps was more challenged finding positive bullet points for players with lesser performances. Sy Berger and company did their best. Leon Wagner, a year or two away from becoming “Daddy Wags,” batted only 129 times in 1959, with 29 hits, but the bullet points on his 1960 Topps card made him look like the star he would eventually become.

Sometimes Topps opted for brevity. In 1959, Carl Furillo of the Dodgers was a little-used sub and pinch-hitter nearing the end of his career. But he had two huge hits that contributed to the Dodgers’ World Series championship, one in the playoff series against the Braves and the other in Game Three of the Series. Those became the only bullet points on his 1960 Topps card—an excellent decision, I think. 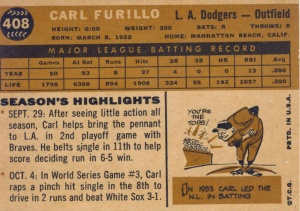 But there were cases in the 1960 set where Topps seemed to be a little clueless when it came to digging up highlights from the previous season. Relief pitchers seemed to be a particular challenge. Roy Face of the Pirates had a legendary 1959 season, winning his first 17 decisions on his way to posting an 18-1 record. While Face’s season was an early cautionary note against the value of pitcher wins—several of his 1959 victories came after blowing a save—his season included a number of outstanding performances, such as seven games in which he worked three-plus relief innings without allowing a run. Yet Topps could come up with only three highlights for Face’s ‘59 season, and one of them involved a game in which he came back “after being sidelined 10 days with a cut hand.”

In the case of Jerry Staley (the player’s preferred spelling of his first name, rather than “Gerry”), one of Topps’ highlights was a World Series game in which Staley worked the final two innings to “save” an 11-0 victory. Topps completely missed the performance that every veteran White Sox fan would regard as the highlight of Staley’s White Sox career: his one-pitch outing against the Indians on September 22 that induced a double-play grounder to clinch the team’s first American League pennant in 40 years.

And Topps completely went off the rails with relievers Don Elston and Stu Miller, opting to go with a prose summary instead of bullet points. That seemed particularly short-sighted in the case of Miller, who started nine times, worked over 100 innings in relief, and ranked second in the National League in ERA. Surely there were a few notable highlights in there.

On the other hand, I have to say that the phrase “his ‘junk ball’ slithered enough to keep the senior circuit hitter confused” might top anything Topps could come up with in terms of Stu Miller bullet points.

But sometimes Topps could be forgiven for failing to come up with either good bullet points, or good prose. Consider the player who, in 1959, played in 152 games and had 527 plate appearances, while amassing a total of 12 (!) extra-base hits and 42 runs scored and posting an OPS+ of 43. Ladies and gentlemen, I give you the man described by Topps as “a swifty on the bases” (1959 totals: 6 SB, 9 CS) and “a good clutch hitter” (.584 OPS with runners in scoring position): George Anderson, better known as “Sparky.”

Sparky’s managerial career would include plenty of material for bullet points, at least.

A SABR member since 1979, Don Zminda writes about all kinds of baseball-related matters. View all posts by Don Zminda