I have to be honest, I thought I was done with these posts unless someone were to create a new Spanish Language set. But the wonderful thing about this hobby is that there’s always, always, more to discover. Which means I was quite pleased to learn that 1998 and 1999 Bowman International not only highlighted where a player was from but also included localized backs. 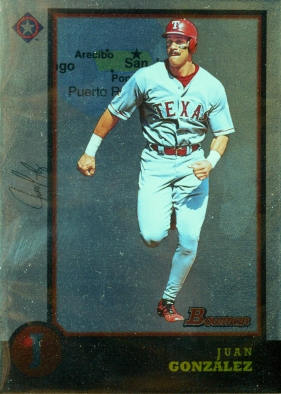 These aren’t one-off parallels but rather a complete set which includes a number of Spanish-language backs—including for players from Puerto Rico who are technically not international players. I haven’t gone on a deep dive looking at the Spanish language text on multiple cards and the stats on these are pretty thin (although Cuadrangulares, Carreras Impulsadas, and Promedio suggest that things are translated fully rather than using the more Spanglish terms like Jonron). Oh, and the #PonleAcento action on González is always nice to see too.

What did jump out at me is that height and weight are in meters and kilograms instead of feet and pounds. None of the previous cards I’ve featured in this series have made this translation but it makes sense here since this set is less about being aimed at the Spanish-speaking market in the United States and more about presenting international backs.

Which means that the set contains cards in other languages too. While at first I was interested in only the Spanish-language cards, I couldn’t help myself and began searching for other languages.

Japanese was the obvious next language to look for and I was pleased to find many on the checklist. I’m not going to comment at all on the language usage anymore since I can’t read them but I do have to highlight how Topps changed the units on the Kanji cards from meters to centimeters.

Also, using a non-Roman font is an impressive commitment for just a few cards in a set. Graceful language switching is something that really only became common with MacOSX and Opentype fonts which could contain a full complement of unicode characters. Neither of these were around in the late 1990s.

Designwise though I’m a bit sad that Yoshii’s Kanji signature is printed sideways.  Yes I know this is how he signed his Topps contract. But given that vertical space I’d like to think he’d’ve wanted the characters to be stacked vertically instead.

Skipping around since there’s no reason to provide exemplars for every language for every year. We also have Korean cards. In the 1999 design, even the name on the front is localized so you have to recognize Jung Bong’s photo or signature.

I’ve really nothing more to add here on top of what I said about Japanese except to note that I find Hangul to be one of the most brilliant things humanity has ever invented and it’s fun to have a US card which features it.

The Ntema Ndungidi card though is fantastic. There are so many good things going on with it. Topps didn’t go with the colonial language and print this in French. Nor did it select the obvious “name an ‘African’ language” choice and go with Swahili. Instead we’ve got something that stumps Google Translate but which appears to be some kind of Bantu—probably Lingala. I love it.

I also love how Topps typeset his height to be “1,85m” and replaced the decimal point with a comma. Topps also did this in the text where it mentions his batting average but didn’t do it in the statistics.

Another point of interest here is that Ndungidi was born in Zaire—a country which no longer existed in 1999 when this card was printed.* Topps still marked his origin as Zaire on the card front and on the back his birth information says “Ex Zaire (R.D. Congo).”**

*Quick quick history. Zaire ceased to exist in 1997 when the Rawandan war spilled into Zaire and the resulting Congo war forced Mobutu Sese Seko into exile and installed Laurent-Désiré Kabila as the new president.

**Note, his regular Bowman card just says Zaire and appears to be completely unaware that that was out of date.

I’m still looking through the checklists to see if there are any other languages I’m missing. I thought Sidney Ponson would be in Dutch but Topps used English for Aruba. Sadly, none of the Canadian players appear to get French cards nor are their vitals in metric units. Nor does Benny Agbayani’s card feature Pidgin or Hawaiian. But I’m plenty happy with what I’ve found and this was a nice way to expand on the Spanish-language posts I’ve been making on here.