As with the previous franchise shifts in 1950’s, the Washington Senators’ move to Minnesota prior to the 1961 season was driven by socio-economic forces, shifting demographics and an outmoded ballpark.  The owner, Calvin Griffith, wanted to move earlier than ’61 but was blocked by the American League owners, who didn’t want to leave the nation’s capital without the “national pastime” and risk the wrath of Congress.

The AL solved this conundrum by creating two new franchises.  Griffith was granted permission to relocate to the “Land of Ten Thousand Lakes,” and a new Senators expansion franchise would fill the void in DC.   The Los Angeles Angels were born in ’61 as well, which gave the AL an even ten teams.

To avoid slighting either Minneapolis or St. Paul, the transplanted squad was christened Minnesota.  Plus, Metropolitan Stadium was not located in either city but in the suburb of Bloomington. Thus,  baseball’s first team representing a whole state joined the junior circuit.  The club adopted a “TC” emblem for the caps to recognize the “Twin Cities.” 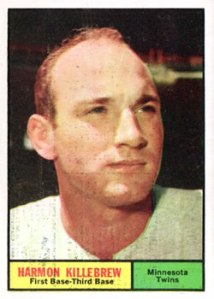 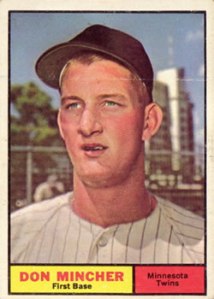 Unlike the other transplanted teams of the ‘50s, Topps didn’t try to guess as to the uniform design or cap emblem.  The Twins cards in the first four series all feature players without caps or with the cap logo airbrushed over.  For example, Harmon Killebrew shows off the effects of “male pattern baldness” and future Seattle Pilot Don Mincher appears to wonder what happened to his cap emblem. 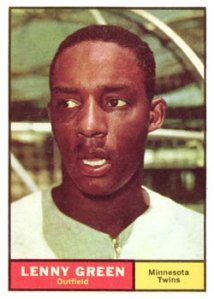 The first Twin shows up early in the first series at card #4 in the numerical sequence.  A bare headed Lenny Green appears to be “dazed and confused” at the prospect of no longer calling DC home. 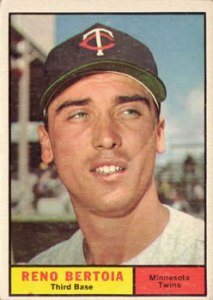 But, the “real” first Twin on a card is Italian born and Canadian bred Reno Bertoia. with card #392 in the fifth series.  This is obviously an authentic “TC” emblem from a photo taken in spring training in 1961.  Other players wearing real caps are: Billy Consolo, Ralph Lumenti and Jose Valdivelso. 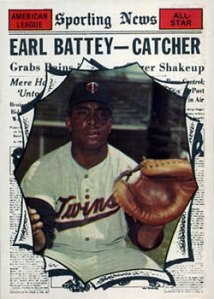 My favorite 1961 Twins card is the Earl Battey All-Star card, in the sixth and final series.  The card back states that Earl was a participant in the first of the two All-Star games in ‘61. However, Earl wasn’t on the roster for either game. His first AS appearance didn’t happen until ’62. Topps must have guessed Earl would be selected, based on his good first-half of the season.  This is the only 1961 card that shows the Twins’ new uniform. 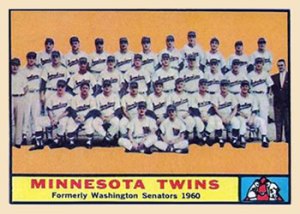 As with the players’ cards, Topps didn’t try to make the ’60 Senators appear as Twins on the team picture card.  It is noted on the front that these are the former Senators. 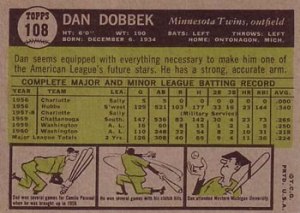 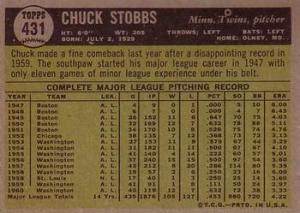 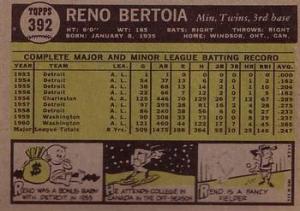 Interestingly, Topps couldn’t settle on whether to abbreviate “Minnesota” on the card backs or even which abbreviation to use.  There are three variations:  Minnesota Twins, Minn. Twins or Min. Twins.  Interestingly, it doesn’t always appear to be related to the length of the players name. The font size should allow for Minnesota to be printed on all the cards. 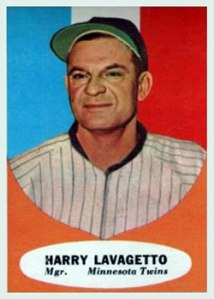 Even though it evokes “Grinch-like” responses from readers of this blog, I will soon gift you with another installment of the “first card” for transplanted teams series.  But first, I’m going to leave this “Cookie” for Santa.

4 thoughts on “From the Land of Sky Blue Waters”