For the last year, I’ve been trying to organize my card collection after a quarter century of neglect. I started with the outlying stuff – non-sports cards, hockey cards, misc., then worked through basketball and football to the big prize.

It was fun to go through the cards of my youth (first set, 1958 Topps) and those of my early collecting years (a stash of T-206s, reprints and Laughlin cards from the 1970s). So far, I’d logged almost 70,000 major league cards with several boxes of doubles still to go.

And then I decided I’d better tackle my minor league sets. Going through old minor league sets, 1974-1993, is a slog of entire Rookie League teams who never produced a major leaguer, of cards of trainers and p.r. directors and batboys and owners, and owners’ sons. On the other hand, there are teams that featured pairs such as Juan Gonzalez and Sammy Sosa or Pedro Martinez and Mike Piazza, and Triple A Teams where nearly everybody got at least a cup of coffee.

It was interesting to watch the cards themselves change over the years. The minor league cards of the mid-1970s were black and white photos set inside a one-color design. As art, they were less than stimulating. The sets were plagued by mis-identified players, mis-spelled names and missing players.

By the 1980s, as Topps responded to competition in the major league sets, the minor league producers (TCMA, Cramer, Fritsch) began to respond to the color photography and better graphics of firms such as ProCards, Best and Star.

But besides stumbling over the Hall of Famers, some of the best moments were finding cards of people who became famous for something else. I’m not talking about the promo cards featuring Kevin Costner.

I’m talking about the Florida State League (High A) 1977 St. Petersburg Cardinals, which included future major leaguers Kelly Paris, John Littlefield, John Fulgham, Ray Searage and Tommy Herr. It also included an infielder named Scott Boras. He had an OPS of .863 at St. Petersburg, was promoted to Double A and traded to the Cubs. But after 1977, approaching 25, he retired, went to law school and entered another line of work. 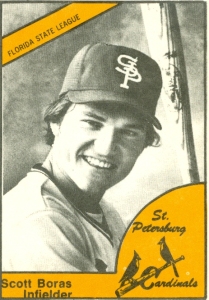 Another who entered a somewhat different line of work was on the 1989 Billings Mustangs of the Rookie level Pioneer League. He was a young shortstop named Trevor Hoffman. He had an OPS of .607 that year, and slumped further the next year at Charleston, WV of the South Atlantic League. In 1991, the Reds decided he might be better used elsewhere and within two years he was in the majors. 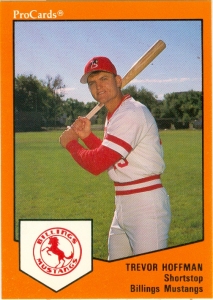 And then there was John Elway on the 1982 Oneonta Yankees.

Future managers spiced up the slog: Jim Leyland on the 1975 Clinton Giants, Jim Riggleman on the 1977 Arkansas Travellers, Bob Brenly on the 1977 Cedar Rapids Giants, Bruce Bochy on the 1977 Cocoa Astros, Ron Washington on the 1980 Toledo Mud Hens, Bud Black on the 1981 Lynn Sailors, Felipe Alou (with Randy Johnson) on the 1986 West Palm Beach Expos, Torey Lovullo on the 1988 Glens Falls Tigers,

And then there were the front office people: Dave Stewart on the 1980 Albuquerque Dukes, Omar Minaya (and broadcaster Harold Reynolds) on the 1981 Wausau Timbers, Billy Beane (with Darryl Strawberry) on the 1982 Jackson Mets, Ken Williams on the 1983 Appleton Foxes, Kevin Towers on the 1984 Beaumont Golden Gators, Steve Phillips on the 1985 Lynchburg Mets, MLBPA head Tony Clark on the 1986 Daytona Beach Islanders. 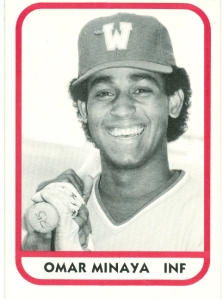 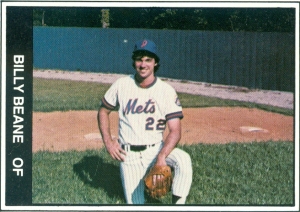 For the star seekers, minor league teams occasionally had Hall of Famers as managers (Frank Robinson, 1978 Rochester Red Wings). More commonly, they brought back Hall of Famers as coaches or for a promotional night, and issued cards of them as well. Hoyt Wilhelm, Orlando Cepeda, Sandy Koufax, Bob Feller and Warren Spahn pop on various teams. 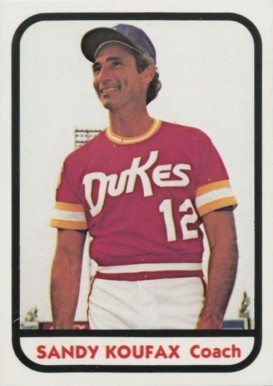 Overall, it proved an interesting tour of both the players of that era and the evolution of the card industry.

6 thoughts on “Touring the Minors”