Author’s note: I really enjoyed two posts from fellow SABR Baseball Cards Committee writer Jon Leonoudakis (jongree). His “Death Comes for Active Baseball Players” and “Death & Baseball Cards” inspired me to attempt a catalog of all 20th century baseball cards honoring the fallen. As the boundaries can sometimes be blurry in this work, I limited my scope to cards that came out within a year or two of the player’s death.

Okay, friends, here come the cards that really put the “rip” in ripping wax, the cards that turn requiescat in pace into requiescat in pack, and the cards you should never buy autographed on eBay. Among their numbers you’ll see Hall of Famers and guys you might not have ever heard of. You’ll see some familiar sets, and you’ll see some obscure ones. And you’ll even see some hockey guys. There really is no greater equalizer than death.

These cards don’t count in the same way as the others featured in this post as the players honored had retired many decades earlier. Still, I thought they warranted inclusion, if for no other reason than to show how blessed we were to have these great players still among us not that long ago. Plus, when’s the last time a Charles Conlon photo ruined a page? 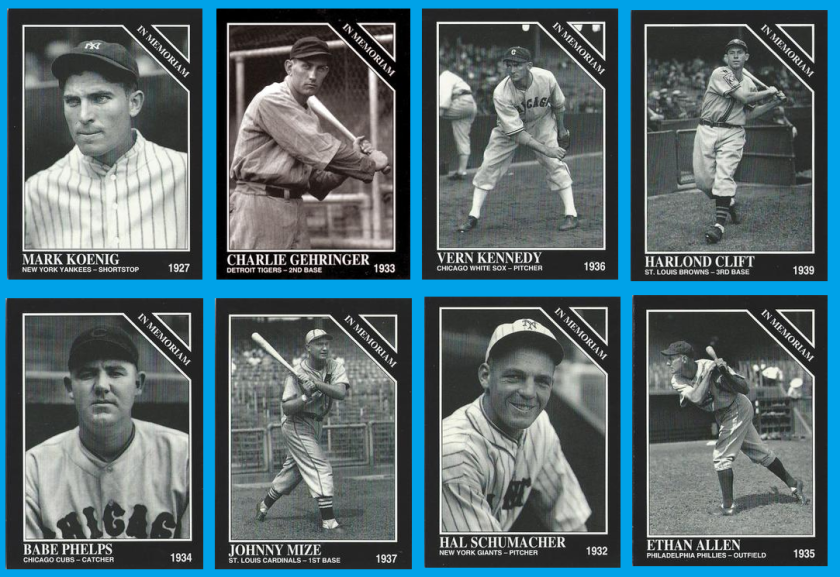 Topps, Donruss, Score, and O-Pee-Chee all paid tribute to baseball’s poet-commissioner, A. Bartlett Giamatti, who passed away on October 1, 1989. The card fronts make no mention of his passing, though his very inclusion in these sets would have been unusual otherwise. Card backs include his date of death.

Danny Thompson died from leukemia on December 10, 1976. While he did not appear in any 1977 sets, he was given card 46 in a regional Twins release. The card back includes his date of death and changes “bats and throws righthanded” to the past tense. 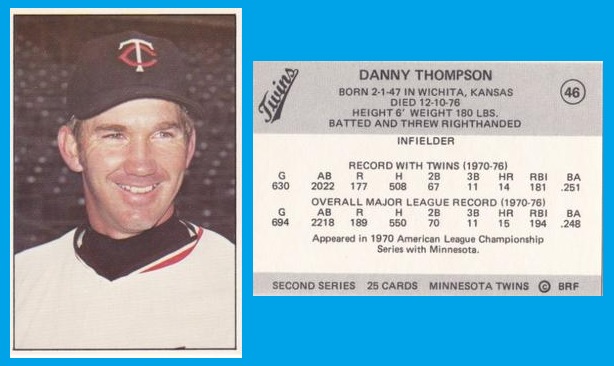 Hat tip to fellow SABR Baseball Cards blogger Keith Olbermann (you may know him from other stuff too) for this one, including the image.

As the Reggie card probably alerted you, these are Topps proof cards. The Thompson card is particularly unique in that he had no card at all when the 1977 set was finalized. Topps essentially acknowledged his passing by erasing him from the set. I’m not sure what stage of grief this suggests Topps was in. Denial?

At first glance the 1972 Topps and OPC issues for Gil Hodges look pretty much alike, at least until you read the fine print. “Deceased April 2, 1972.” I have to imagine the card prompted a number of Canadian youngsters to ask their parents what “deceased” meant. Overall a classy move by O-Pee-Chee and one I wish they repeated the following year for Mr. Clemente.

Ken Hubbs died so young that this card’s almost hard to look at. Still, Topps really went the extra mile in modifying their card design to honor the Cubs infielder. 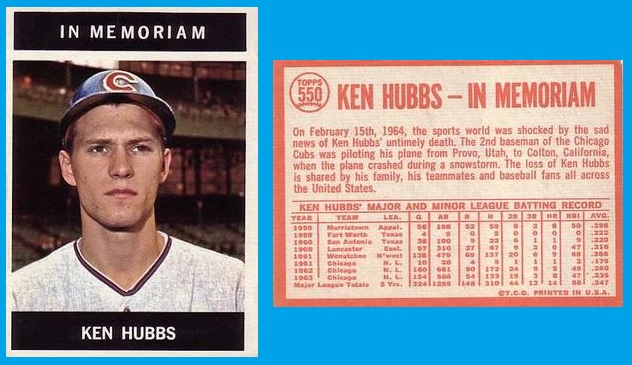 As noted by jongree in both of his posts, Hubbs was not the only baseball death in 1964. Houston pitcher Jim Ulbricht died on April 8 from a malignant melanoma at the age of 33. Topps noted his passing on the bottom of his card back. 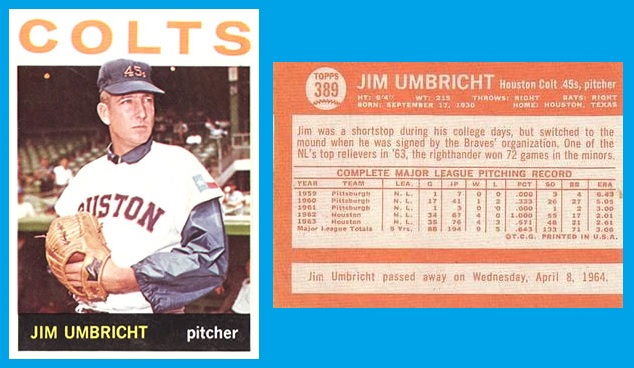 I type this one with a lump in my throat as I nearly died in 2016 from the same thing that killed Harry Agganis. The 26-year-old Red Sox first baseman died suddenly from a pulmonary embolism on June 27, 1955. A rather oddball trading card set whose subjects ranged from porcupines to sunburns included Agganis, Boston’s Golden Greek, as card 55.

While there is fortunately no death to report, hence the mere honorable mention status, the 1955 Bowman Eddie Waitkus card back must be one of the most unique in the history of the hobby, right down to his story’s final sentence. His 1952 Topps also makes mention of his near-death experience, which inspired the Bernard Malamud novel “The Natural.” 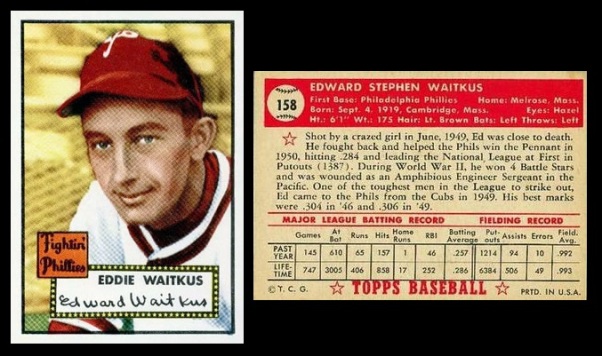 First off, yeah, I’m one of those annoying guys that refuses to say 1948 Leaf or even 1948-1949 Leaf. The Ruth card in this set makes no mention of his August 16, 1948, death. However, there are reasons to at least view this card as Leaf paying their respects.

Now read the back. It’s hard not to read it as an epitaph. RIP Sultan.

Following a late season slump, Reds backstop Willard Hershberger took his own life on August 3, 1940 and to this day remains the last active player to have committed suicide. His card back is rather unique in that it relays to us the emotional impact of his death on his Cincinnati teammates. (Thank you to Chuck Ailsworth for alerting me to this card that was 100% off my radar!)

I know, I know…this is the BASEBALL card blog. But shoot, this one was too good to not include. And the card design is a complete clone of the V355 baseball release so what the heck. The first thing to know is that a Montreal Canadiens player named Howie Morenz died on March 8, 1937. His card back acknowledges as much.

If that was all the World Wide Gum set did, I wouldn’t have included it. However, the set took a particularly unique move that I think gives it an important place in any write-up of in memoriam cards.

The first time I saw this card while digging through a mixed baseball/hockey stack at a card show I assumed it was just a baby-faced player from back in the day. I had no idea it was a nine-year-old kid until I flipped it over. If I wrote blog posts back then I would have written about it, so here you go!

Addie Joss had the shortest life of any MLB Hall of Famer, dying from meningitis at the age of 31. Though he pitched in a very different era, his 1.89 ERA is nothing to shake a stick at. And if you did try that, you’d probably miss anyhow.

All the cards in the Gold Border set are works of art, but Addie’s takes on a special poignancy given the tragedy of his recent passing, noted in the lead sentence of the card’s reverse. The final paragraph of the bio is worth a read as well.

“He was a faithful player, liked by the team mates and respected by the public, many thousands of whom attended his funeral.” 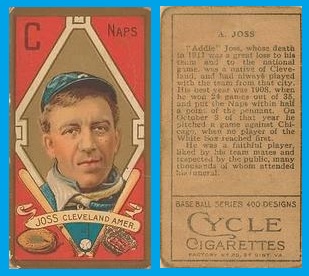 From the “Standard Catalog of Vintage Baseball Cards…”

“To announce to fans the forthcoming Doc Powers Day benefit game, the Philadelphia A’s produced this standard sized (5-1/2″ x 3-1/2″) black-and-white postcard. Front has a photo of the late A’s catcher and information about the special events to be held June 30. On back is a message over the facsimile autograph of Connie Mack asking fans to remember the widow and children of their fallen star.”

Quick aside: The great-granddaughter of Doc Powers is hoping to nab this card on the extremely slim chance you have doubles.

If the real cards profiled in this post leave you wanting more, the “When Topps Had (Base) Balls blog has you covered. Click here to visit its “In Memoriam” gallery, which features a mix of custom cards in the style of the ones here along with other tributes to baseball personalities who have passed away over the years.

A tip of the hat to you, Gio, for all the great work you do keeping this hobby fun and filling in the essential holes in our collections!

17 thoughts on “Waxing elegiac: a century of cards in memoriam”