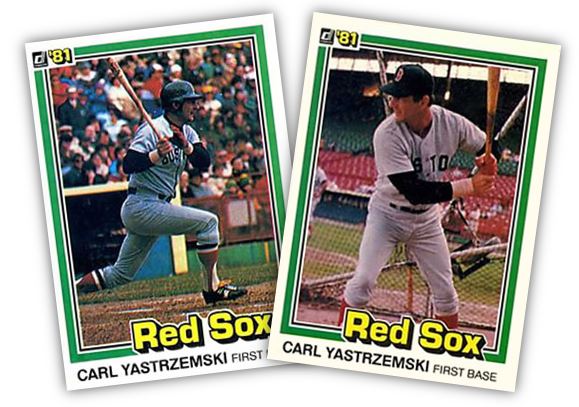 If you bought packs in 1981 try to remember the first thing about 1981 Donruss that jumped out at you. The paper thin stock? The occasional typo? The cards sticking together? This mismatched uniforms and team names?

Okay, come to think of it those were all salient features of the debut baseball set from Donruss. Still, the one I was hoping you’d say is the multiple cards of can’t-miss Hall of Famers like Pete Rose!

As a young collector I’d certainly seen multiple cards of the same player before. The Topps Record Breakers  and 1972 Topps “In Action” cards were prime examples. However, what distinguished the Donruss cards was that nearly all of the extras looked just like the base cards, at least from the front.

As I learned more about collecting, thanks to some local shows and my first Sport Americana price guide, I began to realize the Donruss extras had ancestors in the hobby. What follows here are the sets I learned about in the order I learned about them.

There are numerous examples in the 1933 set, particularly given the 18 repeated players on the set’s final “World Series” sheet. However, the first one I encountered was the most famous of them all: cards 53, 144, 149, and 181 of the Sultan of Swat.

It would have been around that same time that I also learned of the two Lou Gehrig cards (37, 61) in Goudey’s 1934 follow-up release. 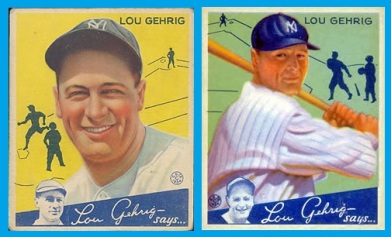 My eleven-year-old self resolved almost immediately to eventually owning each of these Ruth and Gehrig cards. (Spoiler alert: 38 years later I’m still at zero.) In the meantime, the multiple cards of Rose, Yaz, Stargell, and others from my 1981 Donruss shoebox would have to do.

Ever since I got my 1976 Topps “All-Time All-Star” Ted Williams, I decided he was my favorite retired player. As I flipped through my price guide looking for older Ted Williams cards I might be able to afford, I at first thought I found a typo. How could the Splendid Splinter be the first card and the last card in the 1954 Topps set?

There was no internet, and I certainly had no friends with either of these cards. I was simply left to wonder. Were there really two cards? Did they look the same or different? It took visiting a card show to finally learn the answer. Cardboard gold. 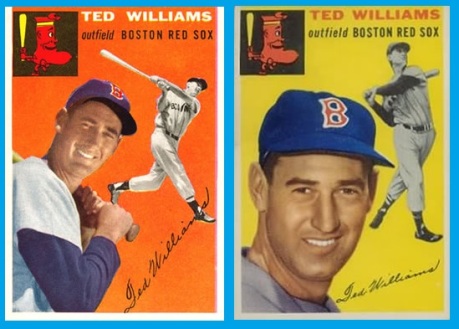 It was much later that I learned Topps had been unable to make cards of the Kid in their 1951-1953 offerings. As such, his Topps debut in 1954 was long overdue and something to be celebrated. Perhaps that’s how he ended up bookending the set on both sides. Or maybe it’s just that he was Ted Freaking Williams.

The tobacco areas of the Sport Americana were a bit intimidating to me as a kid. I recall parenthetical notes next to some of the names (e.g., “bat on shoulder”), but the checklist was dizzying enough that the notes went in one eye and out the other. Again it took a card show for me to see that these cards were my great-grandfather’s Donruss. 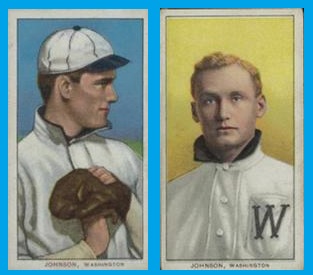 Fast forward about ten years, and I received a gigantic book for my birthday with pictures of thousands of really old cards. It was here that I first learned about “Old Judge” cards, including the fact that some players had more than one card. 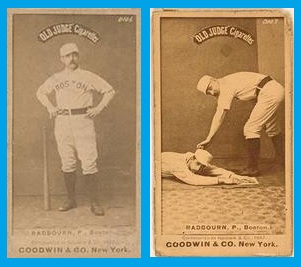 As an aside, that second Radbourn card looks more like a crime scene from Clue than an action pose, but okay.

“1971 OPC? That was unexpected,” you may be saying to yourself. Wouldn’t the OPC cards match the 1971 Topps set, which had no duplicate players at all? I thought the same thing too until I ran across this pair. 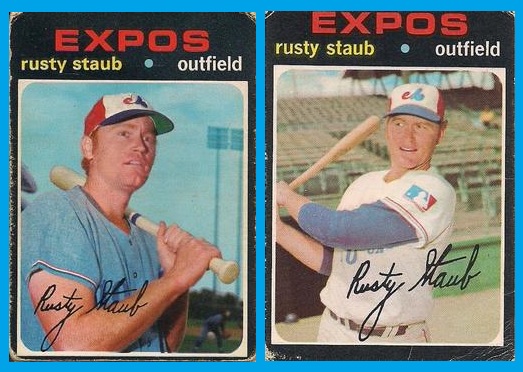 More for convenience than accuracy, I’ll lump various “Exhibits” issues under a single umbrella. Perhaps because these cards were issued across more than four decades and seemingly included zillions of players, it seemed unremarkable to me initially that the same player might have multiple cards in these sets. I’d known this fact for years, but it wasn’t until I reached the “gosh, what am I missing” part of this post that I made the connection between these cards and their Donruss descendants. 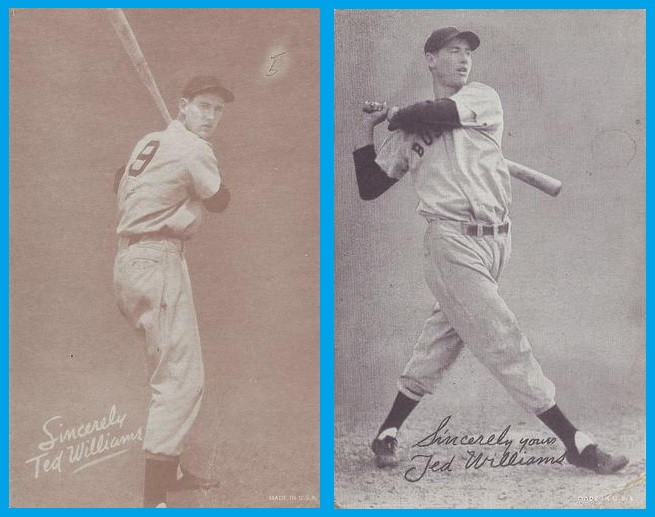 As an aside, I just love that second one of the Splinter. As Anson Whaley notes on his Pre-War Cards site, these sets provide some of the most affordable vintage cards of top-shelf Hall of Famers. On my office wall side-by-side right now are Exhibit cards of Williams and DiMaggio that I paid about $25 apiece for. Along with these Life magazines from 1939 and 1941, the cards really hold the room together. 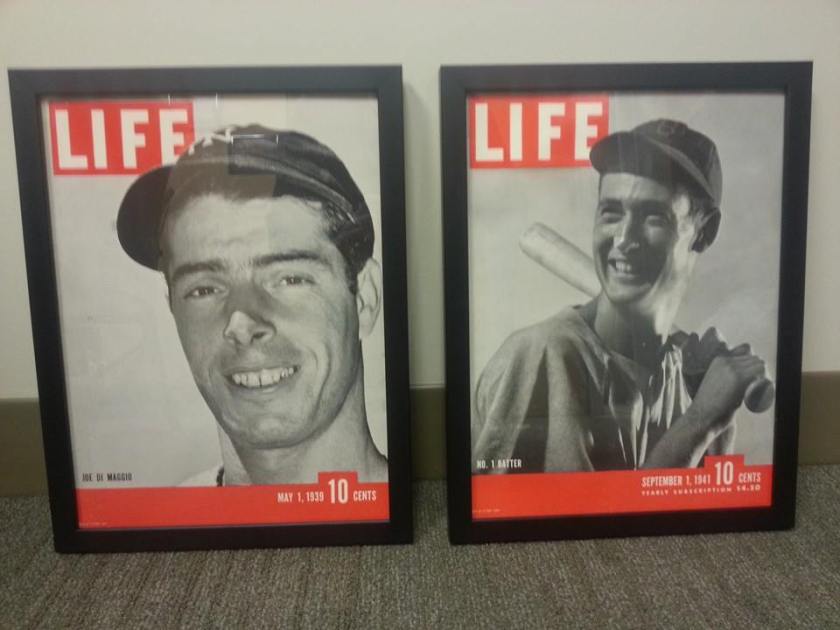 It’s at this point in the post when I have nothing left in my own head and have to rev up the research engines. Time thumbing through the cards “gallery” of great players is never a waste of time, whether or not I find what I’m looking for, but here is a great pair I ran across in my review of Stan the Man.

A quick look at the set checklist indicates that not just Musial but all thirty subjects in the series had both a portrait and an action shot. Can you imagine if Donruss had done the same in 1981? Consider the boldness of crashing the baseball card world as an utter newcomer and not just competing with Topps but unleashing a 1,100+ card behemoth of a set with multiple cards of every single player! 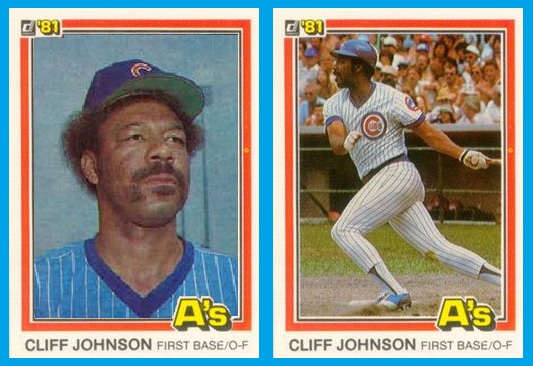 Similar to 1952 Wheaties this is another set that features multiple cards of numerous players, such as this Max Carey pair. 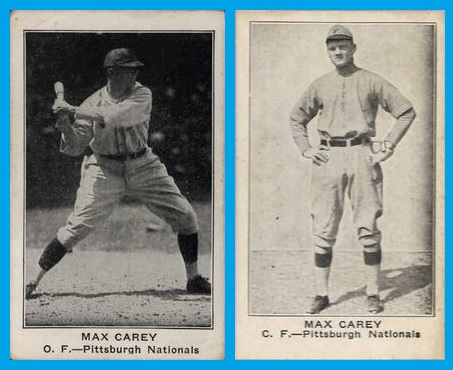 I got a bit of a laugh from Trading Card Database when I saw the names given to each of the variations. The first card, not surprisingly, is referred to to “batting.” The second card is referred to as…so okay, back in high school I was getting ready to take the SAT. I wasn’t much of a reader back then, and I knew the test would include a lot of words I didn’t know. A few evenings before my testing date, I set out to memorize the entire dictionary. Naturally, this proved to be a bigger job than I could really tackle so I finally gave up after the word “akimbo.”

I only once in my life after that–and definitely not on my SAT–encountered the word in print, and I took pride in not having to look it up. And then this morning, more than 30 years after memorizing the dictionary from aardvark to akimbo, here is is again.

If you don’t know the word perhaps you can guess it from the card: it simply means hands on hips. And for any young readers preparing for their own SATs, nothing helps you remember a word more than having a mnemonic, so here you go: Mutombo akimbo. 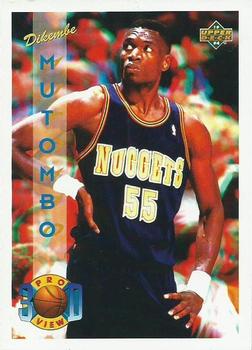 But back to our main topic…

A tip of the hat from Red Sox collector extraordinaire Mark Hoyle for sharing this one with me. The 1941 Double Play set includes 150 cards (or 75 if you didn’t rip the pairs apart). Most of the images are portraits, but the set includes 10 (or 20) action shots that provide extra cards in the set for many of the game’s top stars such as Burgess Whitehead–okay, Mel Ott. 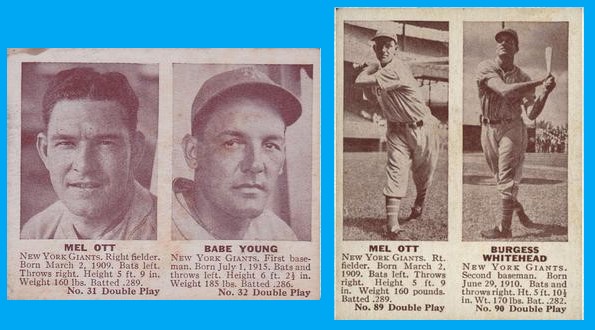 But yes, Whitehead does have two cards as well.

Thanks again to Mark Hoyle for this one! As this 192-card set was issued over three years, I suspect but don’t know for certain that the repeated players in the set were released at different times. As the two Gehringer cards below show, there are also small differences between the earlier and later cards including where the card number is located and how wide the cards are. 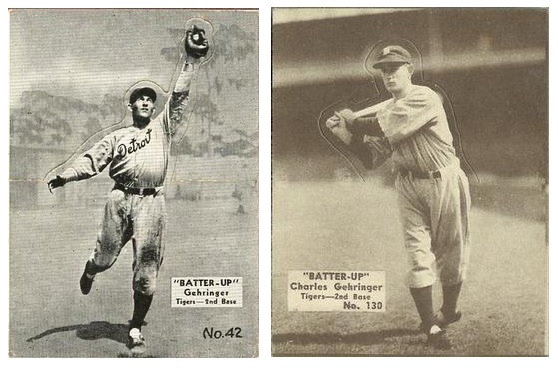 I’ll close with one of my favorite sets ever. Perhaps because I never managed to own more than 6-7 cards from this set, I never paid any attention to an oddity of its checklist. The last dozen cards, numbered 97-108, are all repeats of earlier cards in the set. Here is a listing of the players and their card numbers. 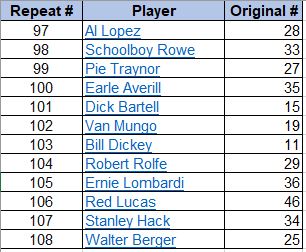 And here is an example of the cards themselves.

The card fronts appear to be identical, while the backs differ in not only the card numbering but also the ink color and the stat line. In particular, the first Dickey card provides his batting average for 1934 and the second provides his average from 1935. (Read this post if you’re interested in more significant variations.)

Aside from my Dwight Gooden collection, my collection tops out at 1993. However, as I see other collectors show off the more modern stuff, it’s clear that extra cards of star players are practically a fixture in today’s hobby.

As the examples in this post illustrate, 1981 Donruss was by no means the first set to include extra base cards of star players. However, we can definitely credit Donruss with being the first major modern set to re-introduce this great feature into the hobby. And you thought the only thing that stuck from that set was its cards to each other!

15 thoughts on “Extra! Extra! Read all about the prehistory of 1981 Donruss!”