For the second consecutive year the official SABR convention baseball game (June 22, at PNC Park) was awarded a Topps Now card. A year ago Topps honored Jacob deGrom for the 2017 SABR47 game, and you can read our posting on that game here.

For SABR folks fortunate enough to go to Pittsburgh this past summer you may remember that the game was a pitcher’s duel between the Diamondbacks and Pirates. This did not go unnoticed by Topps 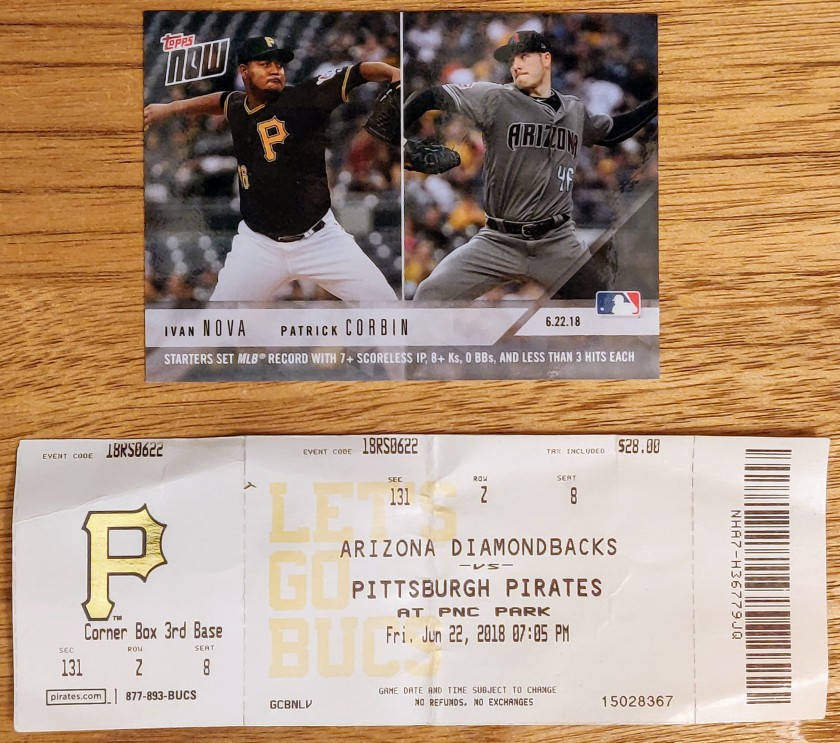 The card features both starting pitchers in a game that went into the 11th inning scoreless. The combined line for the two pitchers was 15 innings pitched, 6 hits, no walks, and 20 strikeouts. While the card does honor an MLB record – the record is in the opinion of Team Phungo a bit dubious. Mostly because of the volume of caveats involved.

… For each starting pitcher

Talk to a probability nerd and that is something like EIGHT conditions that need to be met – no wonder it is the first time it ever happened. With this in mind, rather than research previous comparable games I will simply summarize each of the starts featured in the dual photo on the card.

Ivan Nova’s 8 innings, 3 Hits and 0 runs were all season superlatives for the veteran starter. His game score of 84 was also a personal best for 2018. It was one of two starts where Nova went 8 scoreless and did not get the win. The Pirates had a similar game on April 26 against Detroit which they won 1-0 on a walk-off home run by Corey Dickerson.

The Diamondbacks’ Patrick Corbin had a breakout season in 2018 which resulted in the southpaw placing 5th in the Cy Young voting. During his June 22nd outing he matched a career high with 12 strikeouts. By games score (83) the start ranked in the top 3 for Corbin in 2018.

The Topps Now card features photos of both pitchers, a description of the record in the text at the bottom, and the date of the game. 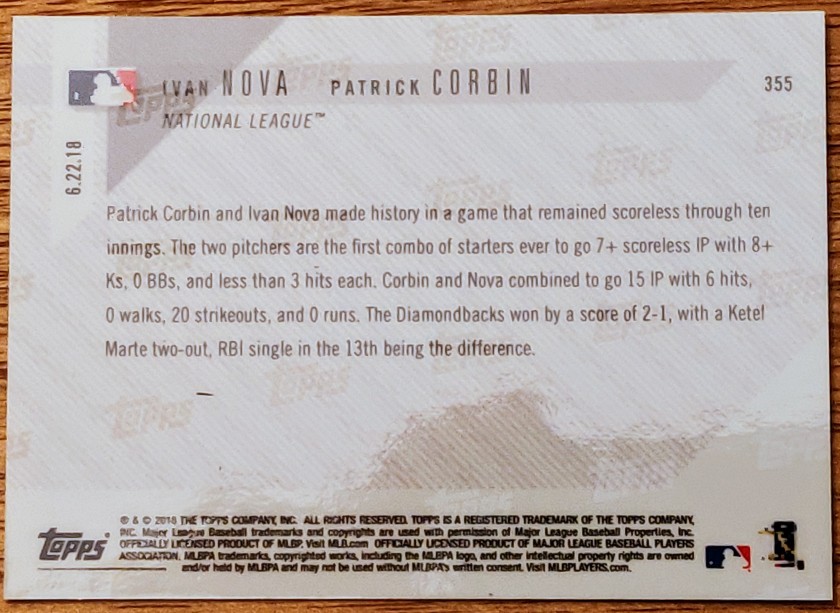 The back of the card goes into a little more depth on the game including the 2-1 final score and also mentions Ketel Marte, who recorded the game winning hit for the Diamondbacks.

ToppsNow cards are only available for a limited time and have limited print runs. There were 169 copies of this particular card that were released. Topps created five cards for games played on June 22, 2018 and this card finished in the middle of that group:

Both images used on the card were taken by Pittsburgh based freelance photographer Justin Berl. Both pictures reside with Getty Images: Ivan Nova Patrick Corbin. It is kind of impressive that Berl got both shots as they are taken from different sides of the diamond.