Although it may be a fool’s errand to follow a masterful post by Jeff Katz with a similar topic, I humbly present my own Frank Robinson post. In a personal note, I was a huge fan of the Orioles in early ’70. With the Pilots gone and the Mariners still to be born, I selected Baltimore as my team. I’m still not over the shock of his trade to the Dodgers after the ’71 season.

Of course, the most famous deal involving Frank occurred after the ’65 season when he was sent to Baltimore by the Reds. This controversial trade brought a great deal of attention to Frank during ‘66 spring training in Miami. Magazine and newspaper reporters and photographers flocked to South Florida to cover the story. Topps sent photographers as well.

Frank’s trade to Baltimore coincided with a 1966 uniform change. The Orioles adopted the familiar “cartoon bird” logo for the cap (replacing the “chirping body bird “) and added an orange bill. Additionally, the home uniforms had a new lettering font and orange became the dominant color over the previous black. Finally, the plain black stirrups were replaced with black, orange and white ones.

Topps’ ’66 Robinson card has the classic “in case of trade” photo. Frank has a head shot-sans cap- while still wearing his Reds’ vest uniform. The back has the frequently used cartoon graphic of a uniformed player carrying a suitcase with an arrow sign pointing to his new city. By the way, that same season Topps pictured Frank in a Reds cap on the NL RBI Leaders card. 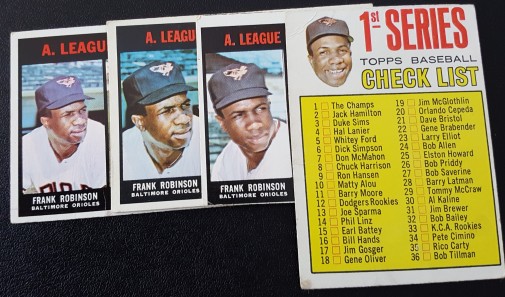 The ’67 card uses a ’66 spring training photo of Robby in the “chirping bird” cap and ’65 uniform. Also, he wears the cap on all three league leader cards and the checklist for the 1st series. 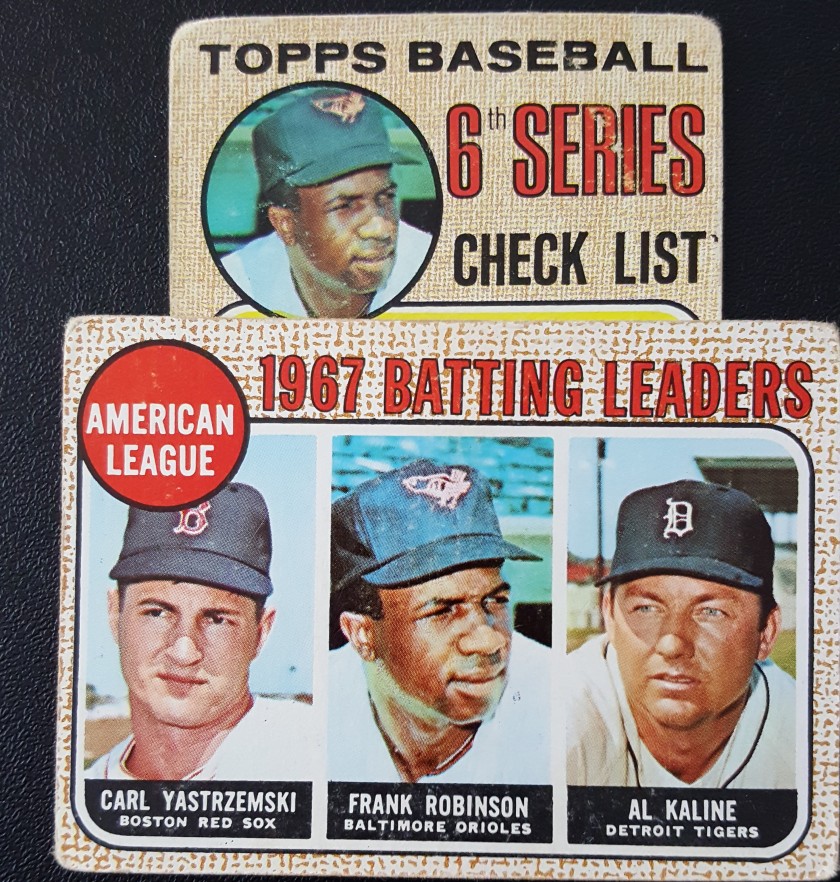 For Robinson’s ’68 card, Topps managed to get a photo of Frank in the cartoon bird cap. However, the photo-used twice on league leader cards’ in 67-shows up on the AL Batting Leaders card and the 6th series check list. 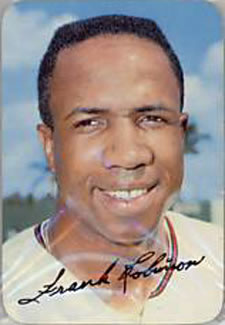 Although I’m not 100% sure of this, I believe the ’69 Topps Super card is a ’66 spring training photo as well. The piping on the uniform is a match for the ’65 uniform.

Other types of collectibles that fall in the card or collectible category have Frank in the uniform he never wore during a “championship season.” Sports Services (left) – who I believe produced photos for concessionaires — issued a “chirping body bird” card/photo in ’66 and Bethlehem Steel (right) issued one in ’67. (Oriole fans may know if this was a giveaway.)

The great “Sport” magazine photographer, Ozzie Sweet, did a photo shoot in ’66 spring training. This results in an iconic magazine cover. “Pulp” magazines such as “Super Sports” were still using their ’66 Miami images as late as ’69.

For decades, “Hillerich and Bradsby” issued an annual titled, “Famous Slugger Yearbook.” They took a different tack than other publications in ’67 by airbrushing the “cartoon” bird on the cap but not altering the ’65 model uniform. This photo is from one featuring both Frank and Brooks Robinson.

The ’66 spring training photos reappear in several retrospective cards. A company known as ASA did a Frank Robinson set in ’83 that contains at least two cards with ’66 spring training shots. Additionally, Upper Deck issued one in the ‘94 “American Epic” set. 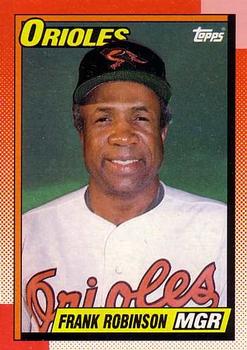 The Orioles returned to a “body bird” in the ’90s. Thus, Manager Frank Robinson wore a sold black cap with a similar bird in a regular season game at last.

3 thoughts on “Robby Goes to the Birds”