1969 was the one and only “glory” year for the expansion Washington Senators. The owner, Bob Short, lured Ted Williams to the nation’s capital to manage the perennial cellar dwellers. An above .500 record in 1969 netted fourth place in the tough American League East Division. Unfortunately, ’70 and ’71 saw the “Nats” revert to their losing ways.

Despite playing in a modern park (RFK Stadium, renamed from DC Stadium that year) and having a large metropolitan fan base that responded with increased attendance during the ’69 campaign, the American League allowed Short to move the Senators to the Dallas/Fort Worth area for 1972 — after only 11 seasons in DC.

The new Texas Rangers settled in Arlington, which is approximately half-way between Dallas and Fort Worth. Turnpike Stadium was hastily expanded to provide a new home for the transplanted team and renamed Arlington Stadium. The change of scenery didn’t help, as the Rangers lost 101 games during their inaugural season.

The birth of the Rangers in ‘72 coincided with arguably the most “colorful” Topps set. The photos are framed in bright colors and feature groovy lettering and stars. However, Topps didn’t produce any cards of players wearing Rangers’ caps and uniforms. The now familiar array of “cap-less” headshots, airbrushing and upward tilted heads greeted the “wax pack rats” in the Metroplex. 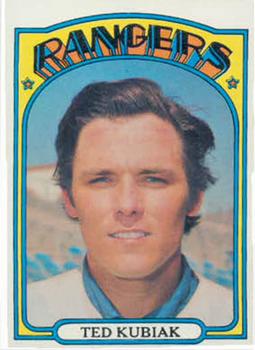 In a previous post, I mentioned that Ted Kubiak’s card was in the first pack of cards I ever opened in ’68. Ted racked up another “first” by dint of being the first Ranger on cardboard. The “would-have-been” ’70 Seattle Pilot spent a couple of seasons in Milwaukee and St Louis before heading to the Lone Star State. This headshot was taken in spring training at the Brewers camp in Tempe, AZ.

Many of the Rangers cards feature “nostril” shots. The photographer kneels and shoots the photo of the player from below. This coupled with the upturned head results in a photo with the cap logo not visible. This technique was used for years, but the ’72 set was full of this style. It’s a good thing that Frank Howard and Toby Harrah cleaned out their nostrils prior to the photo session. 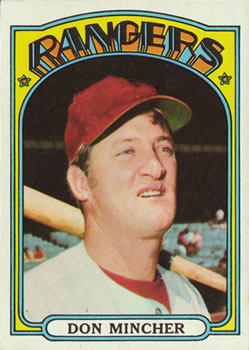 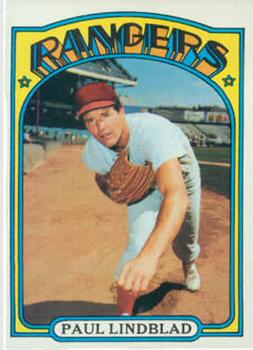 Airbrushed caps were mostly done in red to match the Senators color. However, a few of the cards have a brownish, burgundy hue, as former Seattle Pilot Don Mincher and Paul Lindblad demonstrate. 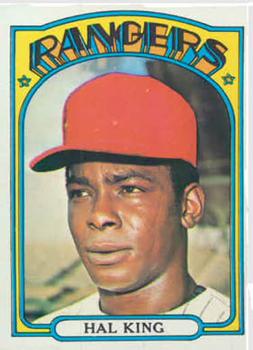 A truly classic airbrush job graces the card of Hal King, who came over from the Braves prior to the ’72 season. No attempt was made to differentiate between crown and bill, just one glorious glob of red paint.

One distinction this set hold is the last Topps solo card for Ted Williams as an active on field participant. He will be replaced as Rangers’ manager by Whitey Herzog in ’73.

Also, 22-game loser (in ‘71) Denny McLain has a Rangers card-though he never played for them. A washed up McLain was dealt to Oakland prior to spring training.

In ’73, Topps makes an awesome choice for the first “real” Rangers’ card: the team picture. This photo is taken at Arlington Stadium with “Teddy Ballgame” clearly situated in the middle of the bottom (seated) row. The squad is decked out in their double knit, sans-belt uniforms.

The first solo player depicted in a Rangers’ uniform is Bill Gogolewski. This ’72 spring training picture has him wearing a button-up jersey with belted pants. This is probably a repurposed Senators’ uniform. The Rangers will never wear this uniform type in a regular season game.

There are several cool action-shot cards of the Rangers taking on the A’s in Oakland. This Dave Nelson card could have easily been one for Dave Hamilton or-ironically-Ted Kubiak (#11), who was traded by the Rangers to the A’s on July 20, 1972. By the way, there are several A’s action photo cards taken during a series in late July of ‘72.

Well, “y’all” survived another installment of a series that rivals the emptiness of the West Texas plains. Since the Mariners and Blue Jays have already been featured, the ‘90s expansion teams are comin’ out of the chute next. Yee Haw!!

4 thoughts on “Teddy Takes His Ballgame to Texas”