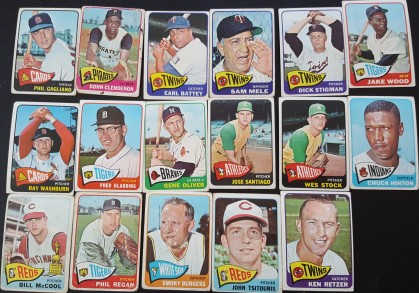 During a recent trip to Cooperstown, my son, Dylan, purchased a mystery grab-bag at a card shop. Amongst other cards, the bag contained 17 “well loved” ’65 Topps. Knowing I would enjoy the vintage cards, he gave me the lot.

I decided to see if I could take this random selection of players and discover any connections, no matter how dubious. Using information from the card backs, a little research and my vast knowledge of the “Grand Old Game” (joke), I set about to find the ties that bind.

Minnesota’s Sam Mele, Earl Battey and Dave Stigman have a special connection since all contributed to the club winning the American League pennant in ’65; the same year the cards were issued. By the way, the back of Mele’s card informs the reader that his real name is Sabbath.

Sam Mele connects directly with Smoky Burgess, since they were teammates on the ’55 Reds. Also, the “burley backstop” has catching for the White Sox in common with Earl Battey.

Donn Clendenon was Smoky’s teammate on the Pirates. Donn and Phil Regan were part of the inexplicable ’69 pennant race between the Cubs and Mets. On July 14, 1969, Phil struck out the pinch hitting Clendenon to end the game.

As fate would have it, Clendenon shares the distinction of being selected in the ’68 expansion draft with Bill McCool, who is bound with John Tsitouris and Jake Wood by dint of being together on the ’67 Reds.

Returning to Phil Regan, the “Vulture” has a tenuous connection to Phil Gagliano-in that both have very dated cartoons depicting stereotypical Indians on the card backs.

In addition, Gladding and Clendenon have a commonality in that both excelled in the Sally League. Fred tossed a no-hitter in ’58 and Donn led the circuit in home runs in ’60.

The “Impossible Dream” aficionados will instantly draw a connection between Phil Gagliano, Jose Santiago and Ray Washburn. All three played in the ’67 World Series. 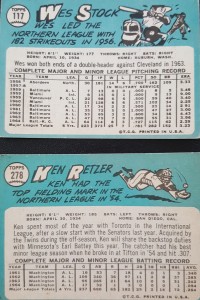 We can use Wes Stock as a segue to Ken Retzer. The cartoons on the back of their cards tell us that both players were league leaders in the Northern League. Wes paced the loop in strikeouts, while Ken topped the fielding percentage chart.

Both guys can claim a tie to Chuck Hinton. Chuck and Stock played for the Vancouver Mounties-though not on the same team and with different organizations. Retzer and Hinton were both traded from the Senators after the ’64 season. Both men are pictured wearing Senators’ togs.

I will end the serpentine nonsense with the fact that Smoky Burgess and Donn Clendenon had great affinity for “law.” Smoky was a teammate and roommate on the Pirates with Vernon Law, while Donn became a lawyer.