Give My Regards to Broad Street. Ring a bell? It was big box office flop, brought to us by Paul McCartney in 1984. As much as a fan I was (and still am), I didn’t have the nerve to see it then. Never have.

I do have the soundtrack though. There are some decent originals, and many new versions of Beatles songs. Maybe not so new. They’re fine, but they’re not the same, merely pointless imitations of finer originals. (When asked about them, George Harrison said “I didn’t notice that they were new versions.”)

My thoughts on Topps Heritage are well known and previously written about. Bringing back old designs, almost the same, but not quite, does nothing for me. The old designs are wrapped in the romance of their time, and how old we were when we got them. 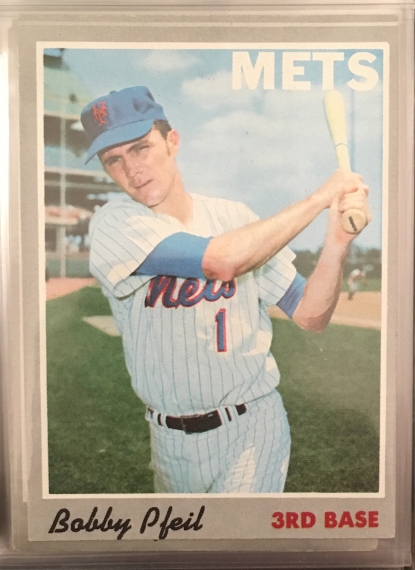 No one‘s going to tell me these cards aren’t awesome, near mirror images of two, by time of issue, ex-Mets, Shea Stadium a glorious backdrop.

I love those two cards. In fact, the Bobby Pfeil is my single favorite card in that set, the one I think of when I think of 1970 baseball cards. It’s only special because I was 7 years old and it’s wrapped in gauzy nostalgia.

I was in Target a few days ago and checked out the card shelves. There was one lonely pack of Heritage tucked away. I held it, put it down, picked it up, walked away, thought that maybe I’d hit something worthwhile, walked back, grabbed it, put it back down, thought about how, though I’d never know, maybe if I didn’t buy it I would’ve left a Pilots autograph behind, went back, grabbed it and bought it.

Here are the nine cards. Completely uninspired and uninspiring, not a single thing to make me buy any more. 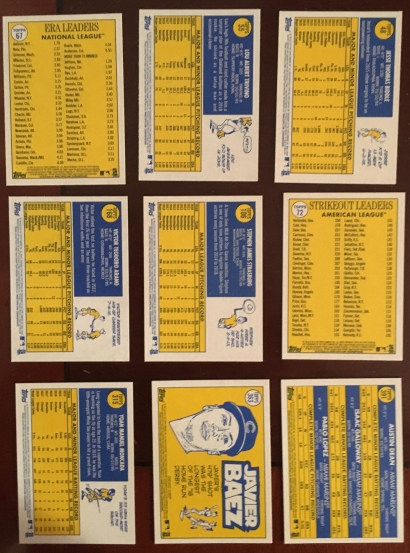 Why does the original matter more? It’s not because of the look – muted gray, standard era photos. The magic is in what they were and who I was when I was buying these packs. That cannot be claimed for Heritage, not this year or any year.

And yet, there’s nothing intrinsically more worthy of Frank Quilici than of Victor Arano (though time may prove me wrong on Arano). Both are pretty non-descript. Yet, the Quilici card has a quality the Arano doesn’t. It doesn’t seem quite as antiseptic, not so perfectly rendered. Maybe it’s the naked guy in a towel at the left of the 1970 card. There’s a sloppiness there that wouldn’t pass today, unless it was intentionally created as a short print for collectors to buy more hobby boxes than retail boxes.

Anyway, many of you enjoy Heritage, and my curmudgeonly ways mean little. However, my disdain for the product leaves more packs available for all of you and for that, you’re welcome.

22 thoughts on “Uninspired and Uninspiring”