I collect team sets and vintage single cards from Pacific Coast League teams.  Of course, I have all the Mariners’ affiliate’s cards, but I also own numerous sets from a wide variety of teams out of the ‘70s, ‘80s and ‘90s. My latest acquisition is a team issued ’75 Tucson Toros set- the AAA affiliate of the Oakland A’s.

The cards are not exactly attractive.  The grainy, black and white photos are filled with obscuring shadows.  The non-standard size and format were used by other PCL teams in the mid-70s.  I have similar sets for Tacoma, Spokane, Phoenix and Sacramento.

The photos are taken at venerable Hi Corbett Field in Tucson, which is the current home of Arizona State University’s baseball team.  Of course, the Indians held spring training there for decades.  In a personal aside, my wife and I “honeymooned” at spring training in ’91.  We saw the Mariners play at Hi Corbett, and Indians’ broadcaster, Herb Score, gave me an autograph.

What makes the 1975 Tuscon set interesting—to me at least—are the familiar players.  Many are veterans trying to hang on and earn one last chance in the “bigs.” A good example is Roger Nelson, who was the Royals number one draft pick in the ’69 expansion draft.  He managed a couple of decent seasons with KC, but injuries short circuited his career.  He went on to be better known as “Weird” Al Yankovic (joke).

Another “hanger on” was Billy “Eye Chart” Grabarkewitz.  The one-time, top Dodger prospect had an All-Star year in ’70 but never again had sustained success.  Tucson in ’75 is his swan song in pro ball.  Bill’s most important contribution to baseball history is little known.  It was his single in the 12th inning of the ’70 All-Star game that put Pete Rose in scoring position.  Jim Hickman’s single sent Rose home, ending in the famous collision with Ray Fosse.

If anything went missing in the clubhouse, the team turned to the resident catcher/detective: Charlie “Chant.”  His tendency to speak as if he were reading fortune cookie proclamations and dropping all his articles was a pain; however, Charlie always found the missing athletic supporter. 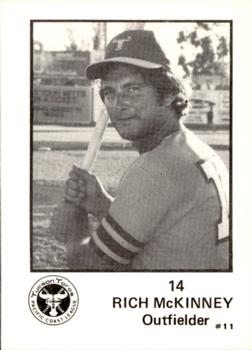 Rich McKinney is on the team as well.  His ‘73 Topps airbrushed photo is so bad that it is positively glorious.

Legendary Oakland A’s owner, Charlie Finley, was afflicted with “trader’s remorse.”  Often, Charlie would re-acquire a player he traded away.  Several of the Toros fall into this category.  Would-have-been ’70 Seattle Pilot, Lew Krausse, started with the KC A’s as a 18-year old phenom in ’61. Charlie was so enamored with Lew that he brought him back twice.  Actual Seattle Pilot, Skip Lockwood, started in the A’s organization as did Ramon Webster, before being traded to San Diego. Veteran reliever, Orlando Pena, spent several years with the KC A’s in the ‘60s.

Chester “Chet” Lemon is the player in the set who would go on to have the best Major League career.  He would star for the White Sox and Tigers in the ‘70s and ‘80s.

The Toros’ manager was veteran MLB pitcher Hank Aguirre.  Many of you may remember a recent post from fellow committee member Anthony Salazar, which featured Hank, who is his personal hero.

Living up to his “gritty” name, Galen Pitts has a bandaged nose.  Perhaps he “duked it out” with a member of the Albuquerque Dukes.

We can pretty much assume that future Braves’ pitching coach, Leo Mazzone, nervously rocked on the bullpen bench before entering a game.

Wearing the familiar green and gold uniform colors of his namesake Ray, catcher Buzz Nitschke was frequently called upon to flatten half backs who broke through the Toros’ front line.

To wrap it up, I present the mascot, “Freddy the Toro.”  He appears to be holding a wagon tongue ready to rid Hi Corbett Field of an obnoxious, drunken fan.

3 thoughts on “Charlie Chan(t) in Tucson”