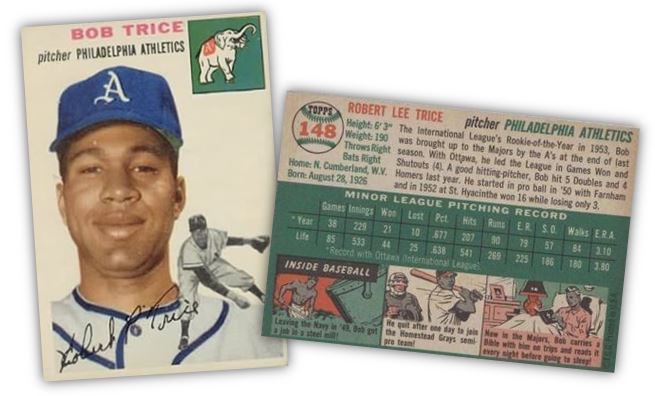 While researching for another article, I came across this 1954 Topps card of Athletics pitcher Bob Trice (SABR bio), the first black player in Athletics history and one of Major League Baseball’s earliest black pitchers. Two things about the card jumped out at me.

First, check the cartoon. Does Topps really refer to the Homestead Grays, one of the great dynasties in Negro Leagues history, as a semi-pro team? Wow. Second, perhaps a corollary to the first, the bio area recognized 1950 as Trice’s first in pro ball even though his Negro Leagues career began with the Grays in 1948.

The question this brought forth was whether Topps applied a similar treatment to all former Negro Leaguers or just Trice. There was only one way to find out!

In all cases, biographical information was sparse and made no mention of their Negro Leagues roots, focusing instead on their Major League achievements.

The 1952 Topps set had more to say about the pre-MLB origins of its black players. In all cases, the story more or less matched the 1954 Bob Trice card.

Despite having pitched professionally for the Baltimore Elite Giants from 1943-1950, the back of Joe Black’s (SABR bio) card 321 sets Black’s first year in “organized baseball” as 1951.

Finally, card 360 has George Crowe (SABR bio) entering organized baseball in 1949 despite his playing for the New York Black Yankees in 1947.

The 1952 Topps set included numerous other former Negro Leaguers—Jackie Robinson among them—but their card bios made to reference to the Negro League tenures or professional debuts, instead focusing on their Major League or Minor League records.

The 1953 Topps set seemed to acknowledge the immense impact of black players on the game by assigning cards 1, 2, and 3 in the set to former Negro Leaguers.

Of all the cards in the set to feature black players—including the great Satchel Paige—only one made explicit reference to a player’s Negro Leagues past. Card 20 of Hank Thompson (SABR bio), a double barrier breaker who integrated both the St. Louis Browns and New York Giants, notes that he spent the 1948 season “playing in the Negro National League.”

Aside from the Bob Trice card, only one other card in the set referenced the Negro Leagues. It belonged to one of the three big rookie cards in the set, Ernie Banks, and identified the Negro National League and Kansas City Monarchs by name. An error, remedied the following season, is that the Monarchs actually belonged to the Negro American League while Banks played for them.

Readers of my earlier Dave Hoskins post will remember his card’s all-too-real cartoon describing the resistance he faced integrating the Texas League.

Following the lead of his rookie card the year before, the 1955 Topps card of Mr. Cub included an explicit reference to the Negro Leagues, noting his .380 batting average in the Negro American League (correct this time!). The bio further indicates that Banks “never played a full season of organized baseball” before joining the Cubs. This is accurate since Banks played only partial seasons with the Kansas City Monarchs in 1950 and 1953 and was in the Army the two years in between. Still, based on what we’ve seen with earlier cards, it’s likely Topps would have made the same statement even if Banks had played full seasons with the Monarchs.

Another notable Negro Leagues alumnus in the 1955 Topps set is the Hammer. Though Aaron starred for the Indianapolis Clowns in 1951, Topps characteristically reports that Aaron got his start in “pro ball” in 1952 with Eau Claire.

However, the bio only tells half the story on Aaron’s card. Though contemporary research has cast doubt on the feat, one of the most famous stories from the Negro Leagues is the home run Josh Gibson hit completely out of Yankee Stadium. Given where Aaron was in his young career (i.e., nowhere near 715 home runs), it’s a rather remarkable coincidence that his card back brings together the three most legendary home run hitters in the history of American baseball: Babe Ruth, Josh Gibson, and Hank Aaron himself.

I know I’ve skipped several years here, but the truth is that references to the Negro Leagues pretty much disappeared entirely from Topps cards after 1955. However, we may see evidence on a 1973 Expos manager card no less that the attitude of Topps toward the Negro Leagues had finally evolved.

Now 1973 was hardly a random year in the history of the Negro Leagues. The National Baseball Hall of Fame had convened its Special Committee on the Negro Leagues in 1971, and there would be three Negro Leaguers (Satchel Paige, Josh Gibson, Buck Leonard) inducted by the time the 1973 Topps set was issued. Additionally, the death of Jackie Robinson in October 1972 may have also raised the profile of baseball’s early African American pioneers and their Negro Leagues origins.

So there is is, finally, under the description of coach Lawrence Eugene Doby. We see that he played 14 years in organized baseball (“O.B.”) and 13 years in the Majors. As Doby jumped straight from the Negro Leagues to the Majors, could it be that Topps was including some of Doby’s time in the Negro Leagues?

Not so fast! One of our Facebook group members, Wayne McElreavy speculated somewhat pessimistically that Topps was simply drawing on the Sporting News Baseball Register, which erroneously placed Larry Doby in the Pacific Coast League in 1960. Oh no! Could it really be?

And sure enough, the Cubs manager card from the same set tells us the answer. Take a look at the entry for Ernest Banks: “Played 19 years in O.B. 19 years in Majors.”

“I ain’t sayin’ you treated me unkind
You could have done better but I don’t mind
You just kinda wasted my precious time
But don’t think twice, it’s all right”

Bruce Markusen wrote more about the card and its Negro Leagues tie-in on the Hall of Fame’s Card Corner blog. Were I looking to this card to support my premise further I suppose I could key in on the clownish way Casanova’s Negro Leagues team is depicted in the cartoon. Then again, the teams called the Clowns for God’s sake, so I’ll happily give Topps a pass on this one!

Author’s note: My next piece will be a Part Two focused on how the other card makers addressed the Negro League heritage of its players. Stay tuned!