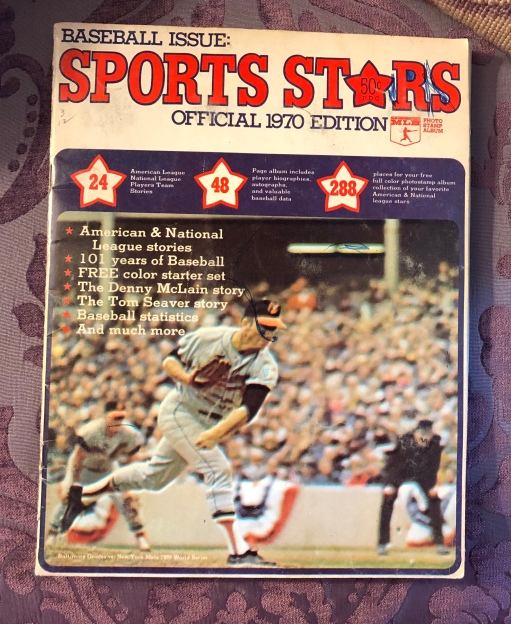 I don’t remember where I got this 1970 Sports Stars baseball stamp album, but I can’t remember ever not having it. (Dave McNally has always had that mustache drawn on his face). It’s always been around, somehow never quite making it into the card collection, always somewhere adjacent.

It’s a weird collection. I can’t quite figure out how this assembly of stickers came together. I have all the National League stamps, though for some reason Johnny Bench and Cookie Rojas are gone.

I have some American League, but I’m missing three Angels. After a solid start, the pages go bare. 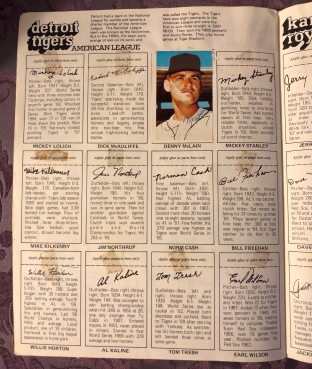 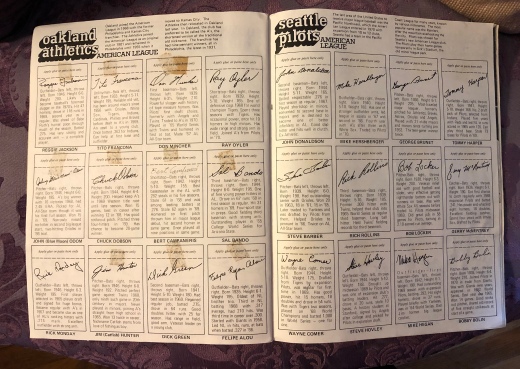 I have only Denny McLain from the Tigers, no Royals, only Harmon Killebrew from the Twins, all the Yankees except Curt Blefary, no A’s or Pilots or Senators, except Frank Howard.

There are so many mysteries. Most stamps are logo-less, which makes sense since it’s a Players’ Association issue, but then why do some photos have logos? I’m puzzled.

How was it sold? Were there different starter sets in different geographic areas? Unlikely, since that kind of distribution doesn’t follow the holes in my collection. 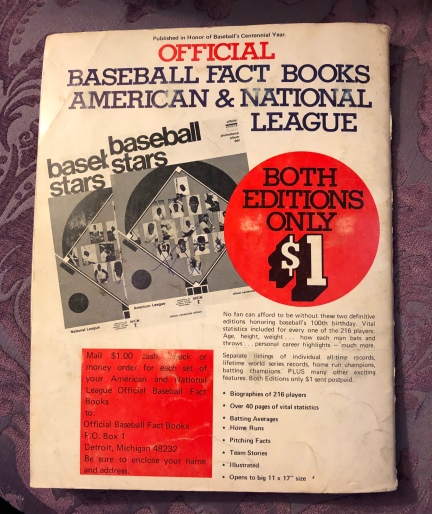 I was going to do a little digging, but the crew over at Net54 already had done the work for me. There were two issues of these stamps. The 1969 one of 216 were sans logo. The following year, the same 216 were printed (probably leftovers) and 75 more stamps were put out with logos, plus a 12 stamp sheet of All-Stars (which explains the random McLain, Killebrew and others.)There are also variations that have to do with dotted lines, some back text, and other minutiae. You can read more here.

That explains some of it. I still don’t know exactly how I got the stamps I have. Clearly the 12 stamp set came with the album, and now I know that there were four series, one for each division. Series 1 had Oakland, Minnesota, Chicago, Kansas City, Seattle and California, and that almost mirrors what I don’t have, but not quite. So I have still have some gaps in the story. Maybe one of you know the answers.

I do like them though, regardless of how they came about. The colors are radiant, the stock is thin but glossy and the player selection is fun. They’re not as nice as the 1971 Dell Stamps, but do make for a solid lead in for those.

I’d like to finish the set, but I’m not seeing many out there. You’d think to get hand cut stamps as crappily scissored as mine would only run about $.20 per item. I can’t imagine people have doubles of these. We’ll see how it plays out.

Did I mention there’s also a football set?

7 thoughts on “Trying to Stamp Out a Mystery”