Author’s note: I suspect what I’m presenting here must have been obvious to the collectors of the day. However, any record of it seems to have gone unpublished. I am hopeful that I am sharing something new and interesting to our readership, but feel free to let me know in the comments if this is more “knew” than “new!”

My previous Cardboard Crosswalk examined the 1941 Play Ball set’s connections to its 1940 predecessor. As I researched and wrote the piece, it was only a passing thought that the 1939 debut offering would contribute anything essential to the story, so I was happy to save the 10+ hours of work any deeper look would provide. It certainly didn’t occur to me that the connection between the 1939 and 1940 set might be the single most unusual and interesting connection between any two baseball card sets ever produced.

Here, then, is the story of an incredible secret, perfectly hidden in the one place nobody would ever think to look: in plain sight.

We’ll start the story with the two top cards in the 1939 set, shown here with their 1940 follow-ups.

There is a nice asymmetry to the four cards. As Williams moves from an action pose to a portrait, DiMaggio does just the opposite.

For collectors undecided as to whether they prefer portraits vs action poses, it might seem fortuitous to end up with one of each. The secret of the sets, however, is that there is no happy accident here. This asymmetry is THE defining feature of the 1939-40 Play Ball sets! Let’s take a closer look.

As the graph below shows, these repeated players (red) came entirely from the first two-thirds of the set. Whereas most repeats from 1940 to 1941 reused photos, the opposite was true from 1939 to 1940. Of the 137 repeated subjects, only 11 (yellow) reused the previous year’s photos.

The other 126 (92%) used new photos. It is these 126 slots on the checklist that will be our main focus from this point forward.

The three action poses from 1940 correspond to three portraits from 1939 and vice versa: Super Asymmetry nearly 80 years before Drs. Cooper and Fowler even proposed the idea on the Big Bang Theory!

We’ll pause here, having examined the first 12 repeated players in the 1940 set, to consider the odds of such an outcome having happened by chance alone. While more complicated modeling leading to even lower probabilities is possible, the simplest and best case scenario would be (1/2)^12 = 1/4096 ≈ 0.00024.

Now here are cards 20-25. The probability by chance now drops to around 1 in 17 million!

By now I hope I’ve convinced you that the swapping between portraits and action poses for each player is no accident but a very intentional design feature of the set. I imagine there are two ways this arrangement could have come about.

Either one of these approaches seems to require more planning, consideration, and expense than anything I would have thought possible at the time. It’s really quite remarkable. (And if you are dying to know which of these explanations is more likely, read on till the end. I have a good guess till someone debunks it in the comments!)

Before continuing through the set, I’ll also pause to comment on the connection (so far) between Super Asymmetry and the 1941 set. Granted there were not many players who made the checklists of all three Play Ball sets, but let’s consider those who did (e.g,. Williams, DiMaggio). Gum Inc had already provided both a portrait and an action pose. Were they to provide another portrait of Teddy Ballgame, they’d be copying 1940, and were they to provide an action pose, they at least broadly be copying 1939. The strategy they had employed to make 1940 as different as possible from 1939 had led them to a no-win situation for 1941.

Rather than accept defeat and go with one or the other, Gum Inc pulled the first (and perhaps only!) Kobayashi Maru of the trading card world. By moving to color, they ensured the 1941 series would look completely different from either of its predecessors regardless of whether portraits or posed action was used.

Here are the next 24 repeated players, along with their 1939 counterparts.

Once again, each 1940 card shows the opposite pose of its predecessor from 1939. We are now a perfect 48 for 48. Perhaps you can predict the ending at this point.

As the 1940-1941 crosswalk showed, a set can start out one way and finish another way. Indeed we will not go 126 for 126, which is why we are dealing with only Super Asymmetry rather than Perfect Asymmetry!

Before looking at the cards themselves, I’ll present an updated 1940 Play Ball checklist with nine new shaded cells corresponding to the set’s asymmetry exceptions, i.e., cards where either the 1939 and 1940 photos were both portraits or both action poses.

First up is Pete Appleton, card 128, who moves from the Senators to the White Sox. (All seven green cell card will involve team changes.) As a side note useful to Appleton supercollectors, Pete Appleton began his big league career as Pete Jablonowski, the name used on his 1933 Goudey and 1934 Canadian Goudey cards.

Lynn “Line Drive” Nelson, card 135, moves from the Athletics to the Tigers, where he certainly lived up to his nickname. Though his at bats were limited as a pitcher, he parlayed his famously low launch angle into a .348 batting average.

Beau Bell, card 138 and French for Beautiful Beautiful, moves from the Tigers to the Indians in his two portraits poses.

Joe Vosmik, card 144, moves from the Red Sox to the Dodgers, a transfer camouflaged by the matching hats but revealed by the differing jerseys. 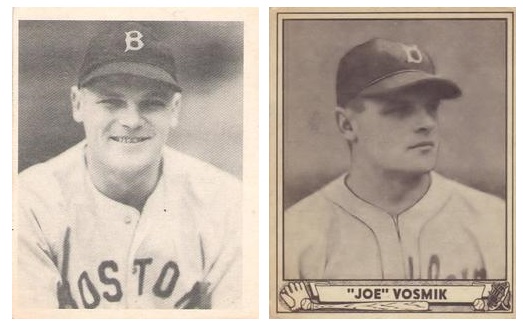 Pinky Shoffner, card 149, moves from the Braves to the Reds just in time to win the pennant.

Finally, imminent batting champ Debs Garms, card 161 and a featured player in the 1940-41 crosswalk, moves from the Bees to the Pirates.

Our analysis of the 1940 Play Ball set would be ready to tie a bow around if not for two inconvenient cards, highlighted in blue on our checklist.

Cards 150 and 151 in the 1940 set belong to Cincinnati players Whitey Moore and Eddie Joost, whose stat line upon moving to the A’s makes it look like he might have!

As often happens in the research I do, I have no explanation at all for why these two players had portraits in each set. Looking back at the checklist, I suppose it’s possible that whoever was responsible for cards 143-151 simply didn’t get the memo, and I suppose it’s also possible that Gum Inc simply had no action shots available. At any rate, two is not a big number.

I speculated earlier as to the two most likely explanations for this near-perfect pairing of portraits and action poses. I am ready now to narrow this down to the first of the two.

Let’s assume that the photographer, George Burke, initially took a portrait and action shot of each of the players in the 1939 set, that Gum Inc simply slotted one for 1939 and the other for 1940 as needed.

The one place this approach would fail to provide for the 1940 release would be if a player changed teams. In these cases the leftover photos would no longer be current enough to use. As we have just seen, eight of the ten exceptions to portrait-action pairs occur with players who did exactly that.

The next clue actually came at the very start of this article. (I know it’s bad form to end a Super Asymmetry article with this kind of symmetry, but sometimes it just happens.) 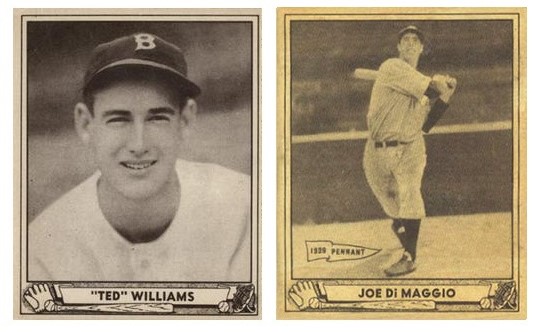 Folks I know who are good at such things tell me these photos of the Splendid Splinter and Yankee Clipper were taken in 1939. (Among the “evidence” presented: “Williams didn’t smile for the camera after 1939.”) If so then it’s easy to imagine a similar story for the other 135 repeated players in the 1940 set.

However, this is a case where the how and the why are less notable than the what. The near-perfect pairing of portraits and action poses is the main headline here as such a connection between the 1939 and 1940 Play Ball sets is something unseen before or after in the long history of the hobby. That this pairing could go unnoticed (or at least unpublished) all this time makes it that much more remarkable.

Appendix for the die-hards

Early in the article I mentioned that 11 of the repeated players in the 1940 set did not get new photos. For completeness, I wanted to at least show them. The first two, Chuck Klein and Gene Moore, appeared in the 1941 set with colorized versions (and uniform updates) of their 1939-40 photos. The other nine players were not part of the 1941 set at all, hence any variety in their cards was limited to black/white vs sepia, slight differences in zoom, and an occasional tilt.