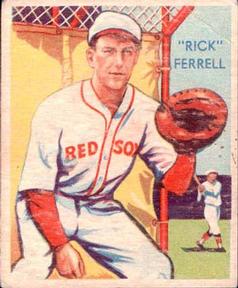 I’m not shy about proclaiming National Chicle’s 1934-36 Diamond Stars as one of my favorite sets ever. The set’s bright colors and period backgrounds seem to hint at the Golden Age of comics just on the horizon (1938-1956), and the set is loaded with action in contrast to the more austere (mostly) portrait-centered design of its 1934 Goudey competition.

Much of the action was posed and, stylistic backgrounds aside, would fit right in with the Topps sets of 1957, 1967, or even 1977: baseball players pretending to do baseball things on baseball fields.

Other cards, however, took the action a step further and put the players right into the game.

Other cards fell short of in-game action but still managed to have interesting things going on in the background. (Click here for a fun Twitter thread on the Medwick card in particular.)

Perhaps inspired by the recent discovery of a Joe Jackson cameo in the T202 set, I liked to imagine that the batter in the distance behind Rick Ferrell wasn’t just anybody holding a bat!

And who says there’s no Lou Gehrig in the Diamond Stars set? Who’s that handsome fellow holding a bat behind the Crow?

And come to think of it, even the guy in the dugout looks familiar!😊

Unfortunately, a funny thing happens when you submit the Diamond Star cameos to a full background check. You come up empty!

Some readers may remember an earlier post that matched the 1933-34 Goudey cards with Charles Conlon source images. Such a massive undertaking was too ambitious for the couple hours I had today, but I did manage to compare 1934-36 Diamond Stars against the 65 premiums that make up the 1934 Butterfinger (R310) set.

I chose the Butterfinger set for three reasons:

Overall, the 108-card Diamond Stars set (of 96 different players) had 31 players in common with 1934 Butterfinger. Of these 31, there were 9 positive image matches and one other I’ll put in the “maybe but probably not” category.

The Diamond Stars Blondy Ryan features what I imagine to be a hustling outfielder, charging in to back up the play. However, “imagine” is the key word here because really there’s noboby there!

Next up is Gus Suhr, who makes the grab at first base several steps ahead of the…wait a minute…I swear there was a runner there!

Next up is Jim Bottomley, throwing a ball around while imaginary teammates check out the bat selection.

The good news on this one is that Joe Vosmik didn’t really take such a half-hearted hack at a real pitch. He’s just smiling (okay, maybe not) for the camera.

Our next batter is Master Melvin, whose Diamond Stars card is actually quite faithful to the photo. (The same Ott image makes an appearance 0n one of his two 1933 Goudey cards as well.)

Ditto for Oscar Melillo, whose card transforms rather drab stadium scene into a vibrant cityscape but otherwise introduces no false action.

While many collectors prefer the purity of black and white photography over bright cartoons, the Butterfinger card of Paul Waner may pose a challenge to their orthodoxy. I can almost picture the scene on the field: “Hurry, take his picture before the elevator doors close!”

It’s fair to say Diamond Stars really made the most of what they had to work with here. (I’m not suggesting Diamond Stars used the Butterfingers as their source, but I am assuming the source photo for Waner is the tightly cropped image we see in the Butterfinger.) As a side note, I believe Waner’s is the only Diamond Stars card to show a uniform number for a cameo player, offering us the rare chance to see who it is! Let’s see, let’s see…#28 on the Pirates in the early 1930s was…nobody!

One of the more exciting matches in the sets is Yankees ace, Red Ruffing, who appears to be joined by Hall of Fame second baseman Tony Lazzeri. As you might have guessed though, it’s nobody at all.

At first glance you may wonder why I am calling this one a match. In truth, I almost missed it myself.

But take a look. All I did was adjust the size–not even any rotation required.

CLOSE BUT NO CIGAR…

The images of General Crowder from Diamond Stars and Butterfinger bear a strong resemblance, but there are hints that the Diamond Stars comes from a different photo. I’ll leave the clues for you to find unless anyone asks me in the Comments.

Upon review it is evident that the Diamond Stars artists simply improvised backgrounds, either to make cards more interesting or to give the illusion of game action. That said, this gimmick was hardly invented at National Chicle, as demonstrated by this 1933 Goudey card of Jimmy Dykes where the action is magically transported from outside the dugout to the batter’s box.

So no, Diamond Stars hardly invented the illusion of game action. However, seeing as the Goudey image has neither catcher nor umpire, I do think Diamond Stars improved considerably on the work of their main competitor, if not perfected the mirage. (Just don’t ask yourself how Lopez had time to toss his mask off in the tenth of a second it took the ball to spring off the bat.)

And besides, who hasn’t failed the occasional background check? It’s not like our national security is at stake here. Or is it? 😉

Check out our earlier article here.