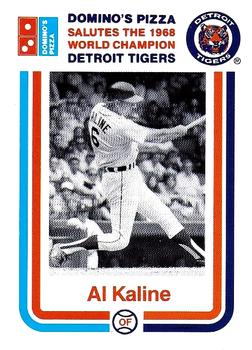 Periodically, I have added commemorative team sets to my collection.  The sets may mark a championship year or other noteworthy occurrence, famous or infamous.  Additionally, sets are issued to celebrate an anniversary year or a players’ reunion.  For example, I did a blog post on cards given to attendees of a banquet honoring the 1969 Senators.   Although this may prompt some of you to cancel your SABR membership, I will post additional pieces on commemorative sets from time-to-time.

First up is a 1988 set issued by Domino’s Pizza that commemorates the 20th anniversary of the Tigers 1968 World Series Championship.  Most of you remember that Detroit bested St. Louis in a classic seven-game series.  This World Series resonates with me since it is the first that I remember watching on TV.

All the photos in the 28-card set are black and white.  Many of the shots are unfamiliar to me, which was part of the appeal-along with being cheap.  All the unnumbered cards have a synopsis of the season printed on the back along with the players’ 1968 regular season and World Series stats.

The cards were given away at Tiger Stadium during an “Old Timers” game featuring the ’68 Tigers players.  It is possible that they were also available at Domino’s locations.  Perhaps a Tiger fan in my vast readership remembers.

Of course, I must include the cards of Ray Oyler and Wayne Comer.  Both players were selected in the expansion draft by the Seattle Pilots after the World Series.  You may recall that the light hitting Oyler was benched in the World Series, with outfielder Mickey Stanley moving into the shortstop slot.  Both Comer and Oyler have memorable turns in Jim Bouton’s Ball Four.

Two Tigers icons-Willie Horton and “Swingin’” Gates Brown-are caught “in action.”  Willie was the big offensive force for the “Motor City Kitties” in 1968.

Speaking of icons, casual fan may not remember that Hall-of-Fame member, Eddie Mathews, closed out his career in a limited role with the Tigers in 1968.

The other Hall-of-Famer in the set is, of course, Al Kaline.  The all-time great is honored with two cards.  Ironically in Al’s only championship season, he suffered a broken arm after being hit by a Lew Krausse pitch, missing three months.

1968 was the “Year of the Pitcher” and Denny McLain was instrumental in creating this designation.  Fueled by endless bottles of Pepsi, Denny won an astonishing 31 games on his way to the AL Cy Young and MVP awards.

Although the Tigers rarely made errors in ’68, there are two error cards in this set.  Pitcher Pat Dobson has a version with the photo showing Jon Warden (card on right).  Additionally, leadoff man Dick McAualiffe has a version that leaves off the “e” from the end of his name.

I will end my Motown meanderings now, since I’m sure you are wishing that I was “looooong gone!”  Plus, I need to go to the Tiger Stadium concession stand and redeem this Domino’s coupon.