Paul Simon tells the story about how pissed off Joe DiMaggio was at him about “Mrs. Robinson.” Simon says he’d heard that Joltin’ Joe was bothered by the song, maybe even to the point of legal action.

“What I don’t understand,” DiMag said, “is why you ask where I’ve gone? I haven’t gone anywhere.”

Maybe it was that sense of being forgotten, if even symbolically that pushed Joe into hawking product. Nationally, in 1973, The Yankee Clipper became Mr. Coffee.

Smartly, the Bowery issued a baseball card, just one. Simple front, 1971 Topps knockoff design (in pink!) on the back. 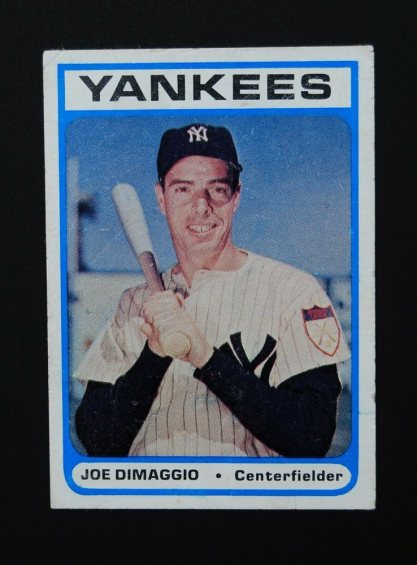 I’d always wanted this card, never got it, forgot about it, but was jolted (yup, I’m using that word) back in time when I saw it at a show last year. Since then I’ve been looking for it. It’s not too hard to find, but the prices run from a reasonable $10ish to unreasonable factors of 10.

At the big Shriner’s Show this past weekend, I was going through a stack of 1955 Bowman Football, and, immediately after paying, saw a scattered stack of cards. There it was! And for $5!

The 1972 DiMaggio Bowery card has always been my favorite bank card. And, while it doesn’t get money, it didn’t take much either.

The authors of this blog are members of SABR's Baseball Cards Committee. To join SABR please visit sabr.org.