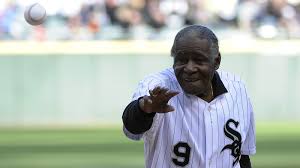 The great Minnie Miñoso would’ve turned 94 today. Or judging from some of his baseball cards either 95, 96 or 97.

But regardless of how old he really was, he was a very important player in baseball history, worthy of the Hall of Fame for his tremendous career as well as his role as a pioneer for black Latinos. So let’s celebrate the Cuban Comet with nine of my favorite Miñoso cards.

This is my baseball card Holy Grail; the one Miñoso card in this post which I do not yet own. They do pop up once in a while, though with a price tag in the $350-$500 range even for something in the 2-3 grade range. Either way, these 1-7/8″ by 2-5/8″ black & white cards were printed on a very thin stock and were intended to be pasted into a collector album. So even when you find one of these, there will likely be a chunk of the back gouged out (this won’t be the first time you read about this here).

On the front of the card, there’s a thin white border with a photo and a small circled number. That’s so you knew where to paste the card in the album. Fun fact about these: the Caramelo Deportivo sets are the only cards I’ve seen of Minnie (Miñoso was featured in the 1945-46, 1946-47 & 1947-48 sets) where he’s sporting a mustache, though a thin one at that.

The first installment of its “flagship” set, Topps has what is considered Minnie’s “Rookie Card” even though he has earlier cardboard appearances (see above). The front of the card lists his name as Orestes, as does his facsimile autograph. Missing here is the trademark straight-edge under the signature, as was his custom years later.

The back of the card does refer to him as “Minnie” even here for 1952.

From 1952-55, Red Man Tobacco issued these colorful 3-1/2″ square cards (they originally came with another half-inch tab at the bottom), bringing cards and tobacco products back together again as they were with the 19th century & early 20th century sets. Everything you want is on the front here. The back of the card is just an advertisement of the set itself with an offer to collect 50 of the tabs and send them in for a baseball cap. Apparently, that’s what the original owner of my card did.

At only 2″ by 3″ this qualifies as a Mini Miñoso. There’s not much to it; the back of the card boasts “Hit Parade of Champions” with a brief bio and a few statistics. These cards have a sort of primitive charm to them. The printing is a little off, the centering also not quite right, and there’s little nubs on each edge as if they were part of a perforated strip. I got this card at a good price probably because somebody’s name is stamped on the back.

65 years ago, somebody enjoyed a cup of ice cream and when they removed the lid, there was “Minny” Miñoso. If there’s another card of him listed as Minny, I’m not aware of it. These lids advertise the Dixie Lid 3-D Starviewer; all you need to do is send 25 cents, this lid, name and address to the company. Personally, I’d much rather have this lid than the Starviewer, even if it looks like quite a contraption.

Minnie Miñoso played only 39 games for the St. Louis Cardinals, but it was long enough to get his face on a one-dollar 4-1/8 inch by 1-3/4 inch “Baseball Buck.” Sure, Henry Aaron and Roberto Clemente were on $5 bills and Willie Mays & Mickey Mantle were on $10 bills, but there’s nothing wrong with being on a $1. George Washington is on the $1 and that’s good enough for me.

These are TOUGH to find, particularly in good condition, because just like the Caramelo Deportivo cards I mentioned earlier, these were glued (or stuck in some way) inside collector albums, evidenced by the chunk of the back of my card that was torn off. Other than that, this might be my favorite Minnie card.

First of all, I had never even heard of this set before stumbling upon it. It’s pretty rare and it came from another country. I love the beautiful shade of blue as a plain background for the player image, which might not be a surprise to those who read my post on the 2010 Tristar Obak cards.

Editor’s note: This subset of 49 retired baseball players and one who would still be active in 1980 😃 was part of a larger Venezuelan release popularly known as 1967 Topps Venezuelan. However, there is some reason to believe these cards were not produced by Topps at all.

What’s my point? Well, the White Sox were still including Minnie Miñoso in team-issue sets even though he last played in 1980 (even though there were attempts to get him into a game in 1990 as well as 1993). And that means something. He’s Mr. White Sox. An iconic player in franchise history, as well as baseball history.

This card was given out to attendees of Minnie’s memorial service at Holy Family Church in March 2015. It’s nicely done in the 1964 Topps style with red lettering instead of the light blue used in the original set. Plus, the #9 memorial logo is shown in the upper left corner.

Nine (okay, thirteen) cards of one man, spanning over 70 years. An amazing man. An amazing life. And about one year from now, we’ll hopefully be celebrating his election to the Hall of Fame on the Golden Era ballot.

Editor’s note: Chris delivered a terrific presentation on Minnie’s Hall of Fame case at a 2019 SABR Chicago chapter meeting. His presentation begins around the 19:00 mark of this video.