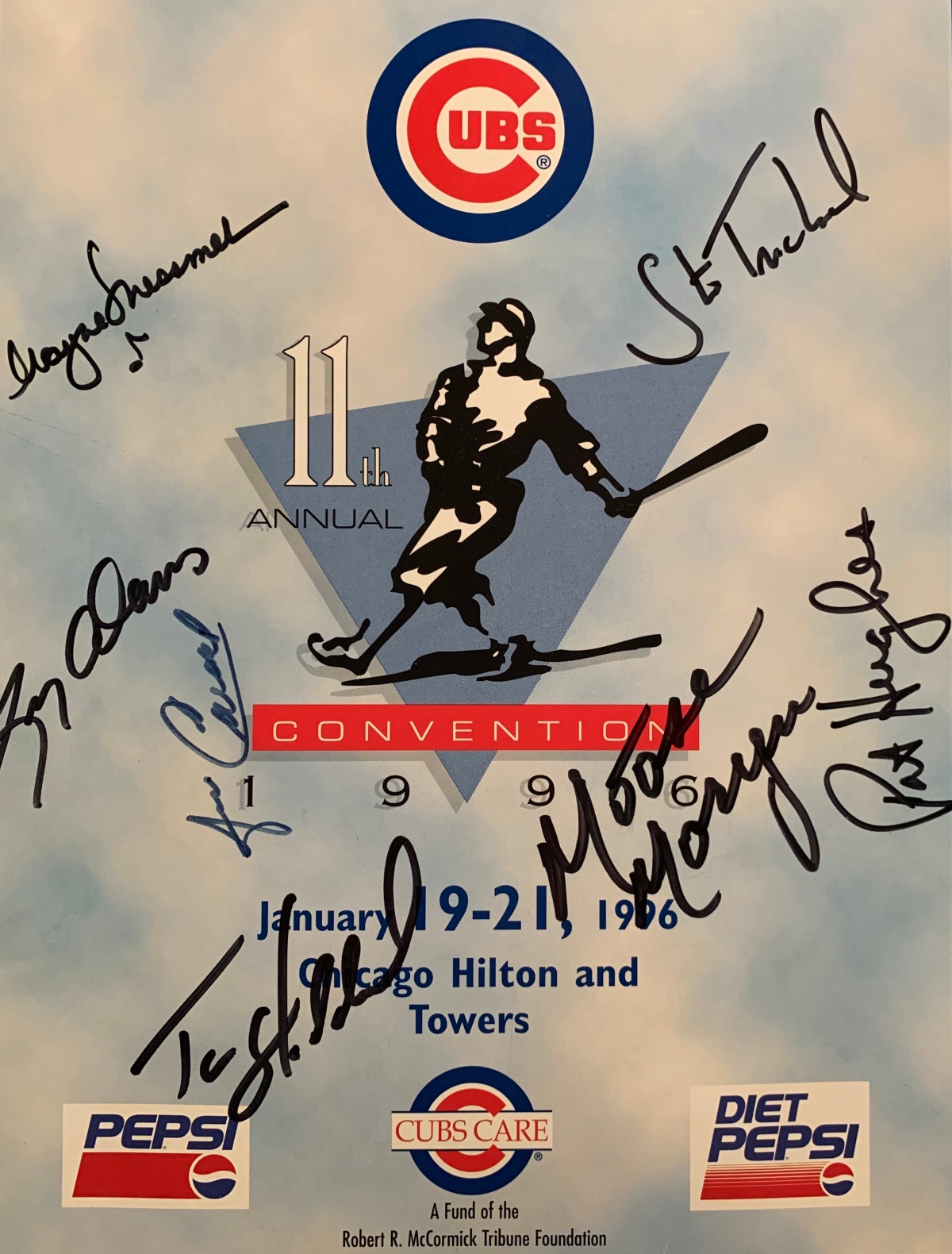 Self-proclaimed as the greatest off-season event in all of sports, the Cubs Convention was the brainchild of Cubs’ marketing director John McDonough (now president and CEO of the Chicago Blackhawks). The 2020 Cubs Convention will be the 35th such event to offer fans up-close panel discussions, autograph and photo opportunities, and just about any Cubs-related merch a Die-Hard Cubs Fan could ever desire.

The Cubs hosted their first-of-its-kind fan convention in 1986 and quickly established a tradition of creating special gifts for attendees such as hats, thermal mugs and team calendars. For their 11th annual convention in 1996, the Cubs introduced a set of baseball cards featuring the players, coaches and broadcasters who appeared at the weekend-long event.

The eclectic set of 28 cards was packaged in a boxy envelope, sealed impenetrably with a circular white sticker on the back. (If you are purchasing a sealed box, know that the cards can be removed from the box without disturbing the seal.) One set was given to each convention goer at registration.

The image on the front of the box depicts Brian McRae jumping atop an apparent walk-off celebration. Shawon Dunston and Mark Grace are easily identifiable, as well. (Dunston does not appear in the set, as he was granted free agency by the Cubs following the 1995 season.) 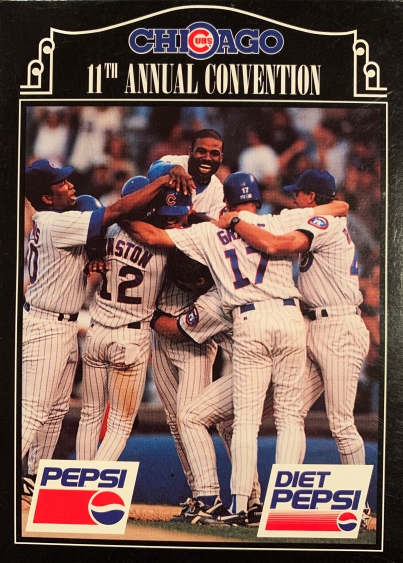 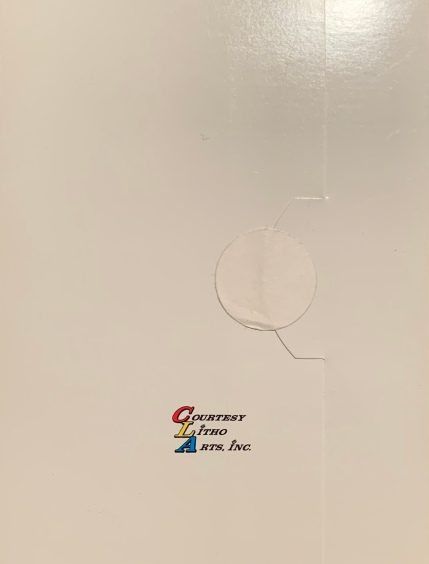 Measuring a robust 4” x 5½”, the sexy black-bordered cards are printed on a relatively thin stock. The top border is an homage to the famous Wrigley Field marquee and features the distinctive mid-1990s Cubs logo. Cards of active players included career statistics on the back. Retired players’ cards had highlights and career statistics on the rear. The cards are not numbered. 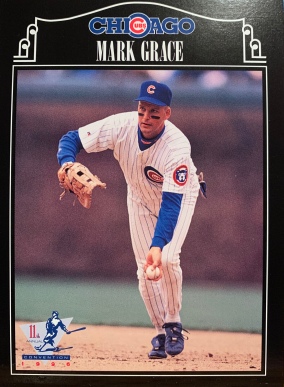 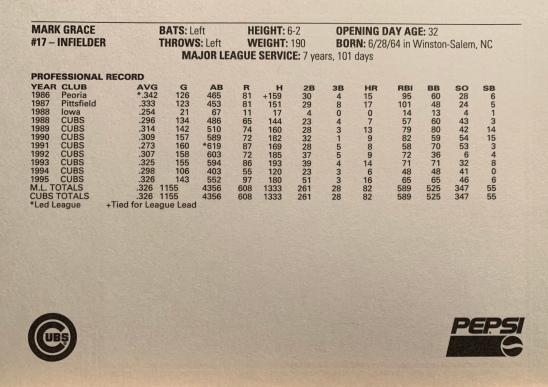 Most of the cards feature a single individual, like these Hall of Famers, including a bespectacled Ferguson Jenkins, the Cubs then pitching coach: 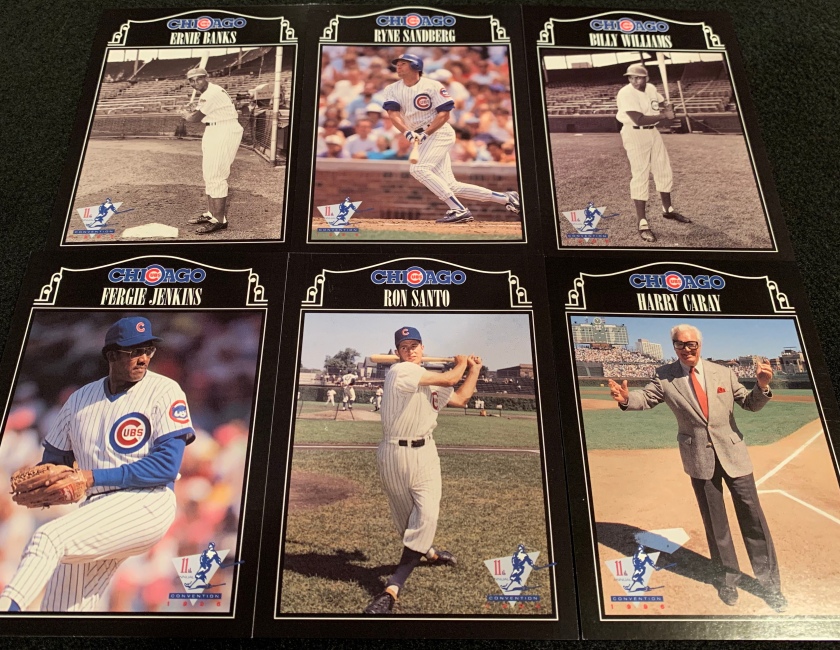 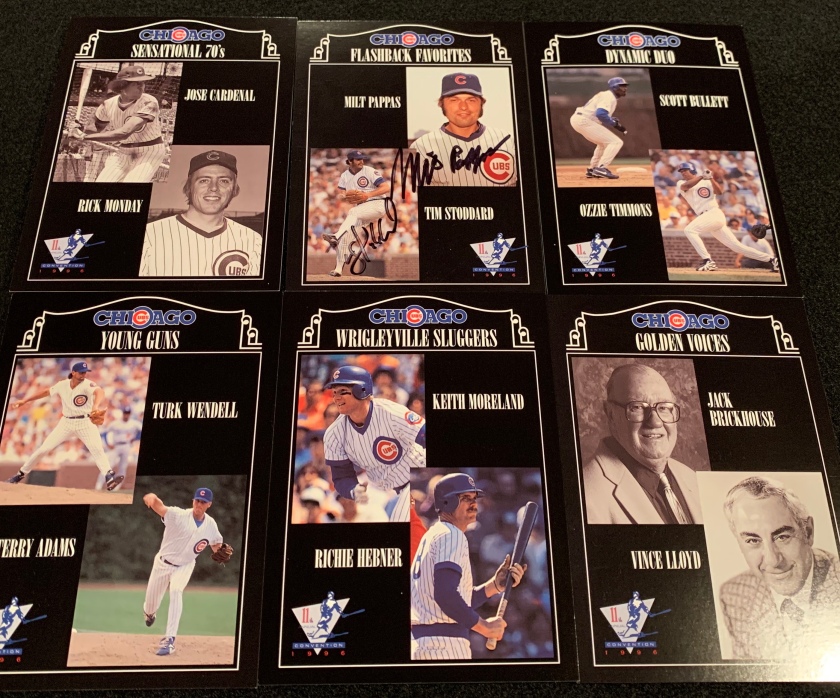 The final card is an advertisement for the now-defunct Vineline magazine with Ernie Banks on the cover. A closer look at the card reveals a posthumous (but presumably misprinted) enticement for 1995 postseason tickets. (By the time of the 1996 Cubs Convention, the 1995 Cubs had already finished 3rd in the NL Central.) 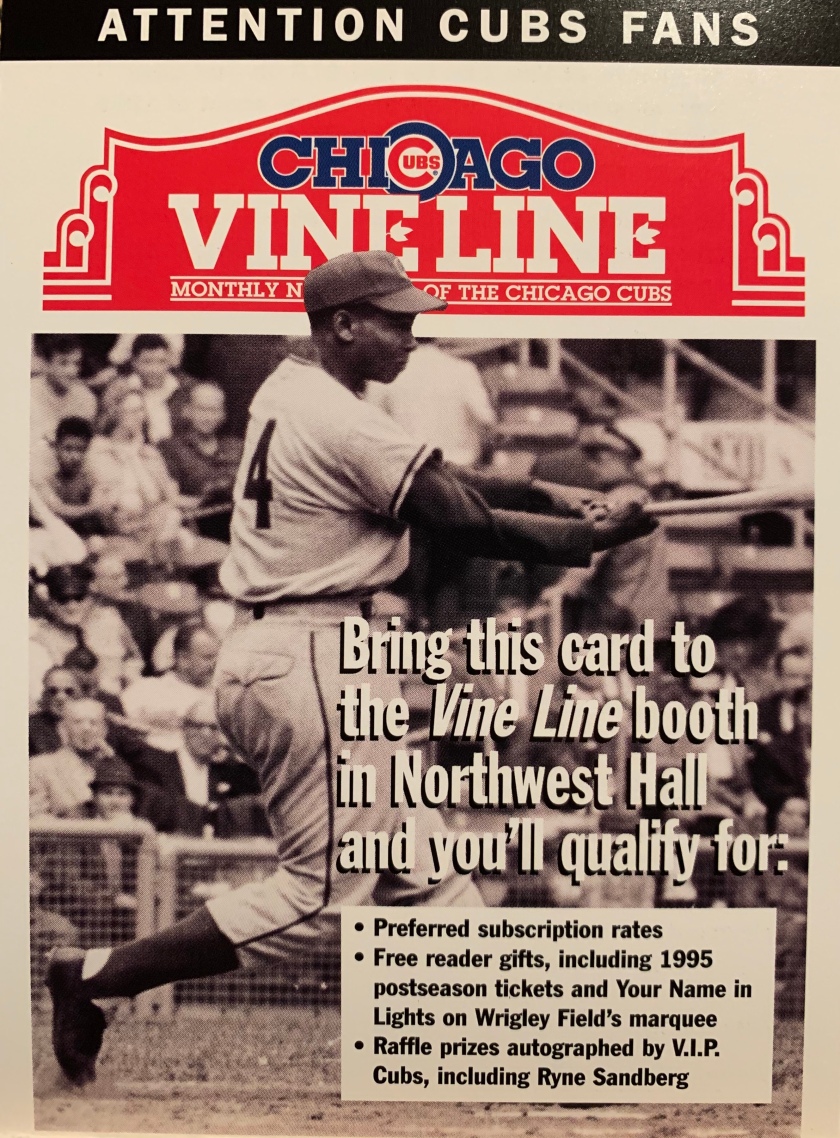 The Cubs Convention is a bonanza for autograph collectors and these cards are perfect for that purpose, like this Andy Pafko signed for the author: 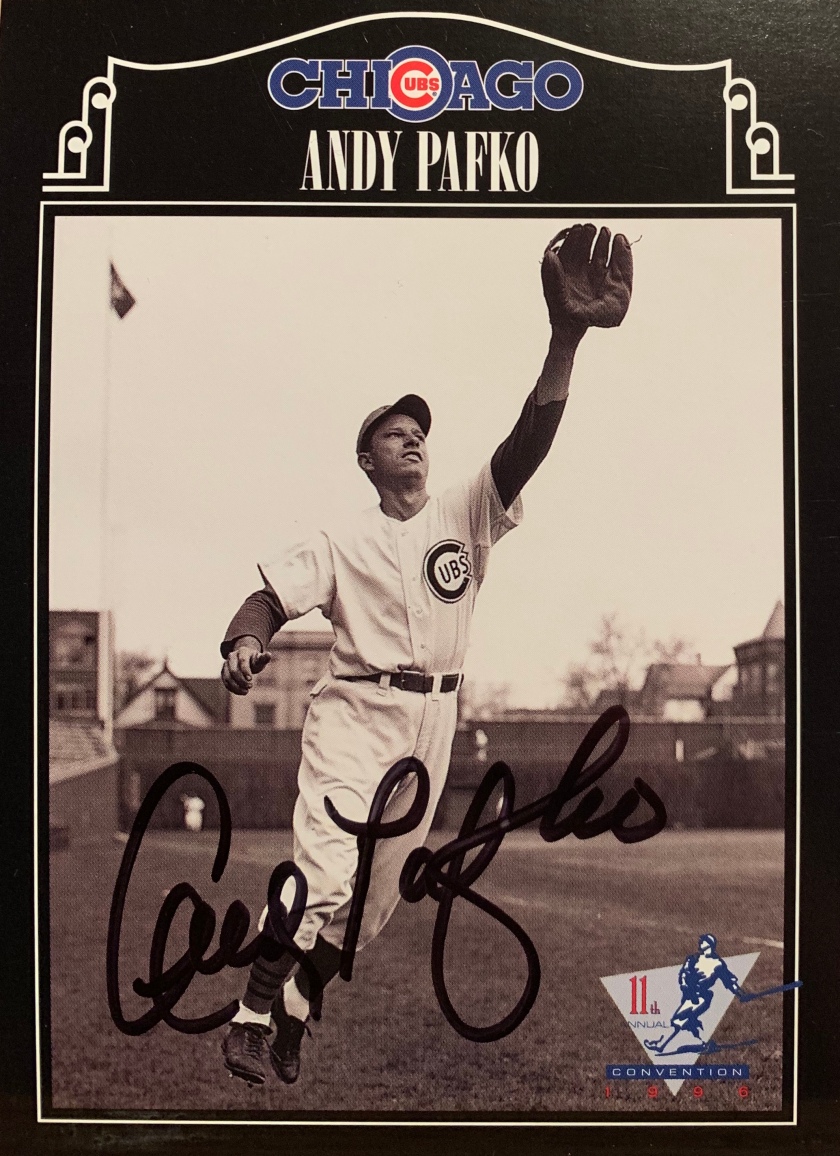 The Cubs have never disclosed convention attendance figures, so it is unclear how many of these sets were produced, although it is likely in the 10,000-25,000 range. If you are a Cubs fan or individual player collector, these are great oddball cards to add to your collection.

That 1996 Cubs Convention also included a special Donruss exhibit, where you could get custom card produced. This baby-faced slugger 1/1 is the rarest card in my collection: 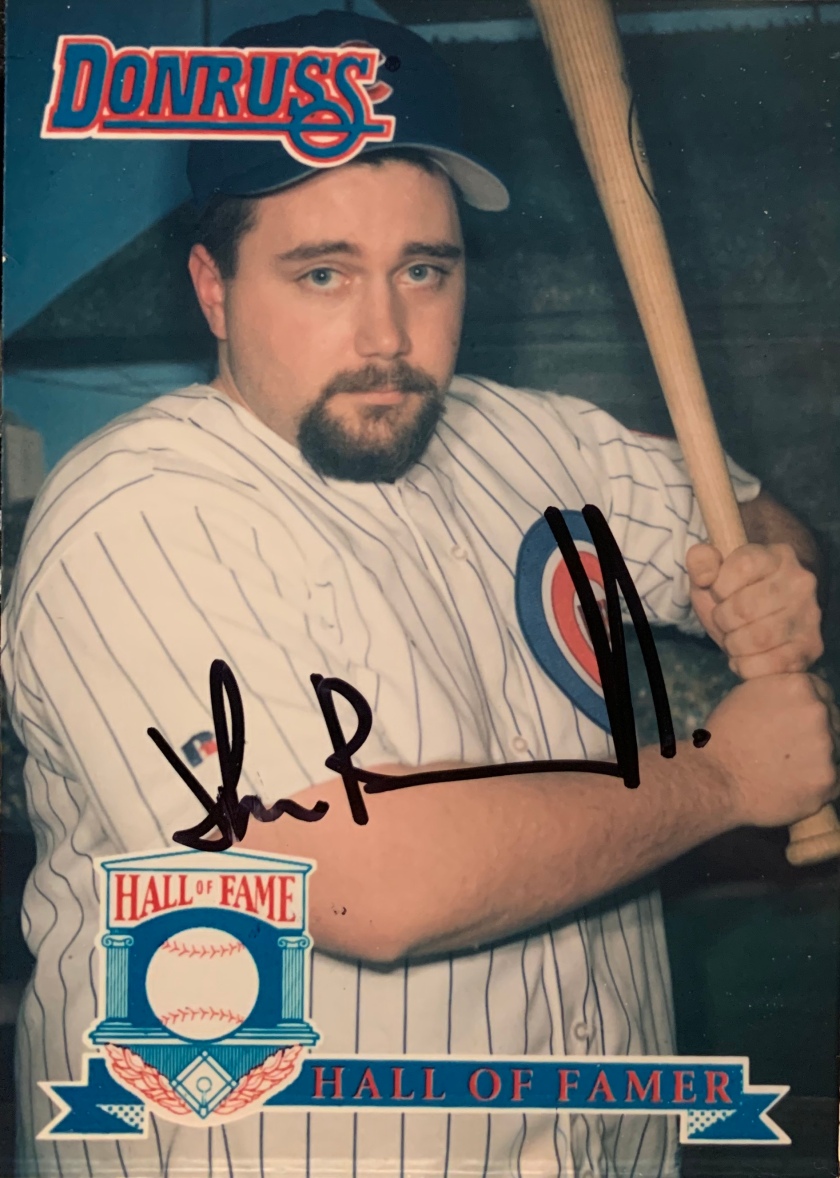 3 thoughts on “The Most Conventional Card Set”