On Saturday, September 20, 1997 the Cubs held Ryne Sandberg Day in honor of the future Hall of Famer’s official—and this time permanent—retirement as a player. [You may recall he had walked away from the game following the 1994 season and did not play in 1995. Ryno returned to play in 1996 and 1997.] The Cubs produced a special commemorative program for the occasion that included “The Sandberg Collection” on the inside back cover—an eclectic mix of baseball cards representing each of the seasons he played in Chicago. 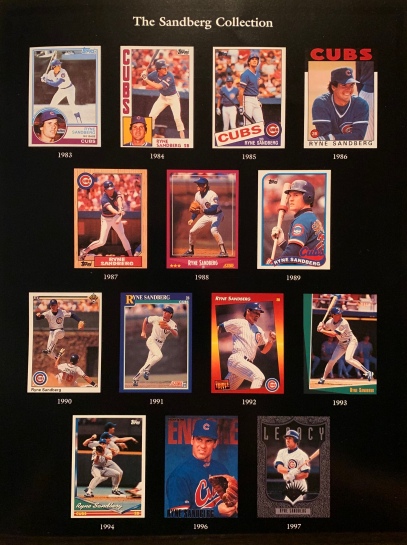 Sunday, September 21 was the Cubs’ final home game of the year and a merciful end to an abysmal season on Chicago’s north side. In the first inning, Sandberg put the Cubs up 1-0 with a ringing double off Phillies’ starter Curt Schilling. After he singled off Schilling in the fifth, Sandberg was lifted for a pinch runner. As he jogged off the playing surface at Wrigley Field for a final time, Ryno paused and tipped his helmet to the crowd. A raucous, goosebumps-inducing standing ovation followed. The Cubs went on to win the game 11-3.

To mark the occasion of Ryne Sandberg’s final home game, the Cubs issued a single commemorative baseball card for the September 21 contest. Sponsored by LaSalle Bank, the card was produced in a standard 2½ x 3½ size, and included a list of career accomplishments on the back, along with Sandberg’s Major League and Cubs career statistics, up-to-date through September 14, 1997. (The slight discrepancies attributable to six plate appearances for the 1981 Phillies.) 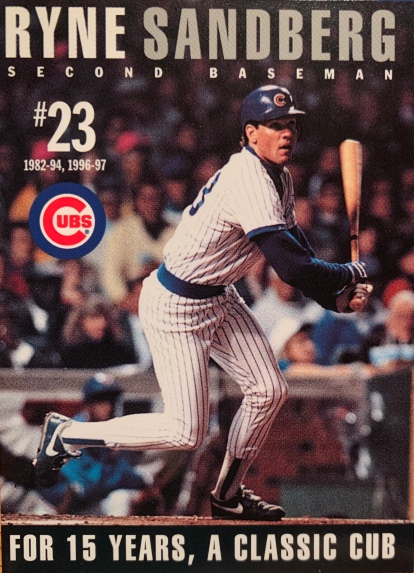 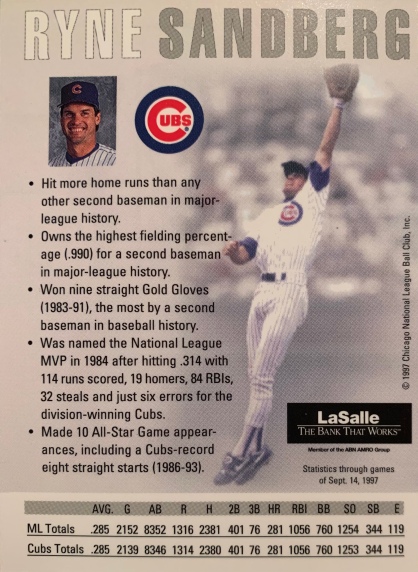 On September 16, 2007, White Sox DH Jim Thome appeared in his 2000th MLB game at U.S. Cellular Field. Thome broke a 7-7 tie in the bottom of the ninth inning by smacking his 500th career home run off of Angels twirler Dustin Moseley, becoming the 23rd member of the 500 home run club and the first ever to do so in walk-off fashion. The Sox won 9-7.

After Thome’s historic blast, ballpark ushers came down the aisles to hand out large (4 x 6) cards in celebration of accomplishment. I was not there for this game, but my neighbor was—and she knew I collected cards. She saved hers especially for me. 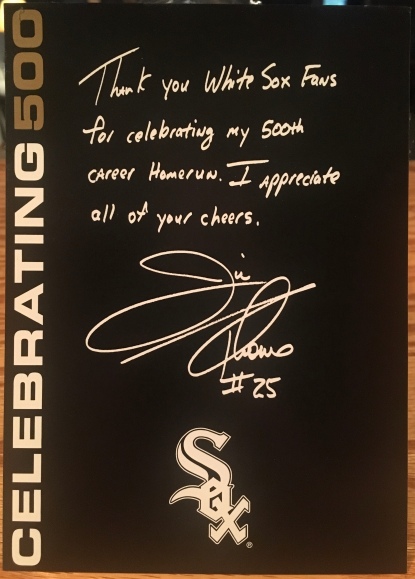 Fittingly, the man voted nicest player in baseball used the back of the card to thank the fans, endorsed with a large facsimile signature.

The White Sox later commemorated a pair of Thome blasts hit in 2008 with a bronze plaque—but not cards—highlighting the first two baseballs ever to reach the Fan Deck at the ballpark, hit on June 4 and September 30, the latter of which accounting for the only run scored in game 163 against the Twins, giving the White Sox the 2008 Central Division championship.

Throughout the years, team-produced card sets were staple giveaway items. These Sandberg and Thome cards, however, were one-offs specially commissioned by the Cubs and White Sox to celebrate a retirement and momentous career milestone, respectively.

No reliable information regarding the quantity of each card produced has been found, and because the cards were simply handed to fans in an unprotected state, the number of cards that survived in top condition is presumably limited. Further, because these cards do not really have an official name, searching for them on eBay or otherwise proves problematic.

What Other Cards Are Out There?

Are you aware of any other occasions on which teams issued similar one-off baseball cards to celebrate a single player’s retirement, accomplishment, or otherwise?

At the very least, it appears the Philadelphia Athletics produced a picture card for Doc Powers Day in June 1910, in an effort to raise funds for his widow. Powers had died following an on-field injury suffered in 1909.