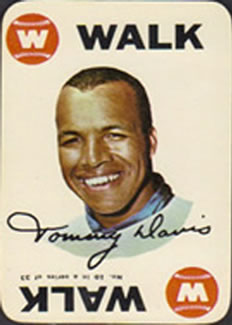 In reaction to a post on the SABR Baseball Card Committee Facebook page, someone commented that Tommy Davis was depicted on a different team for seven years in a row starting in 1966. This is quite an “achievement,” and will be explored in detail. Tommy’s walkabout through the major leagues ran head long into the MLBPA boycott of Topps, resulting in the repeated use of the same image on his cards and inserts. But even before Tommy left the Dodgers, his image was often recycled. Let us now ogle some wonderful cardboard from a player for whom serious injury may have derailed a Hall of Fame-worthy career. 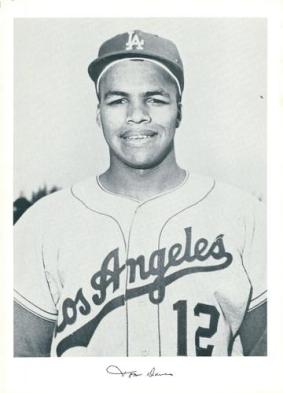 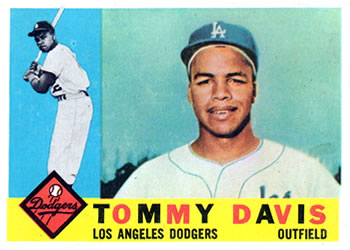 Topps uses the same photo in 1961 but adds the fantastic Topps All-Star Rookie trophy image. Plus, Davis’ cropped head from the photo shows up on the 1961 Topps stamp.

Tommy has a spectacular 1962 season with a league leading .346 average and an amazing 153 RBI. Fittingly, the emerging star gets two cards in 1963, since Fleer burst on the scene as Topps short lived rival. 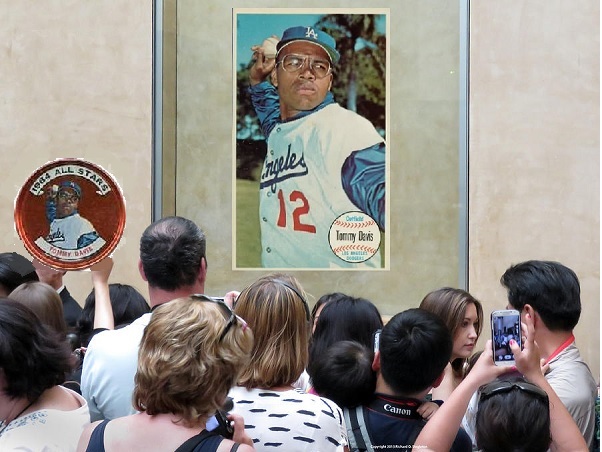 In my humble opinion, the 1964 Topps Giant is the best of all Davis’ cards. The “in action” pose, glasses, and jacket under the jersey add up to produce a beauty. Topps liked it too. Tommy’s cropped head is used on the All-Star version of the coin inserts in 1964.

In May of 1965, an awkward slide at second against the Giants resulted in Davis suffering a severely broken and dislocated ankle. His slow recovery dimmed his star status. Tommy was hobbled in field and on the base paths and his batting stroke suffered as well. Topps produces a card featuring Tommy’s profile in 1965. This unattractive shot was used again in 1966.

Tommy’s vagabond years starts in 1967 when the Dodgers decided to part ways and ship him to the Mets. This results in a classic, traded head shot. After one productive year at Shea, the Mets sent Davis packing to the White Sox for Tommy Agee and Al Weis. A different head shot graces his 1968 card but the 1967 is repurposed for the game insert (see top of article).

The odyssey continues in 1969 when the White Sox leave Tommy unprotected in the expansion draft, and he is selected by the Seattle Pilots. Tommy is arguably the Pilots’ best hitter, forever holding the RBI record with 63. As a big- name player on an expansion team, Topps offers up several Davis products. His base card uses the same picture as 1967, the stamp brings back the 1966 image and the Super test issue card recycles the 1968 image. Airbrushed Dodger photos show up on the Deckle Edge and Decal inserts. 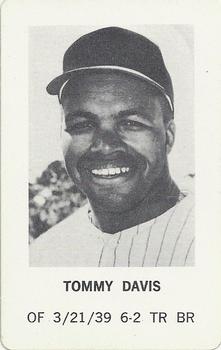 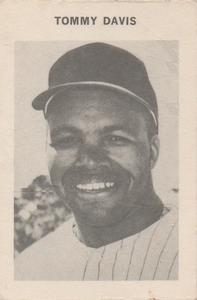 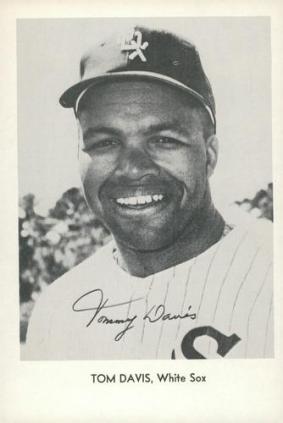 In addition to Topps, 1969 and 1970 saw Milton Bradley produce game cards which used an image of Tommy from the 1968 White Sox team issue photos.

The Pilots dealt Tommy to Houston in August of 1969, which launches him on the next stage of his “Cook’s Tour.” The 1970 Astros card features an airbrushed cap and “nostril shot,” probably taken while with the Dodgers. His stay in Houston was short as the Astros sent Tommy on to Oakland who in turn sold him to the Cubs late in 1970. Finally, in 1971, Tommy has a photo wearing in the team’s uniform for the first time since 1966. 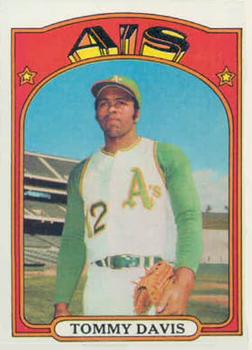 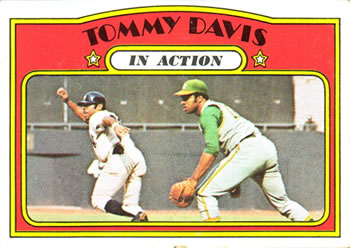 It goes without saying that Tommy’s windy city stint was more of a “blow over.” “The Drifter” catches a freight bound for Oakland during the 1971 season. This results in a nice base card and a classic “In Action” photo of Tommy holding Horace Clarke on first at Yankee Stadium in the 1972 set.

Though Tommy was productive in Oakland, a dispute with owner Charlie Finley results in his release in March of 1972. Tommy will re-sign with the Cubs in July and eventually be traded to the Orioles. Tommy’s release may have factored into Topps not issuing a Davis card in 1973. His streak of cards on different teams ends at seven years.

But fortune shines on Tommy in the form of the Designated Hitter being implemented in the American League in 1973. The mobility challenged Davis is inserted into the potent Orioles lineup in the DH role. Tommy will have a career renaissance, helping Baltimore to two East Division championships in 1973-74. 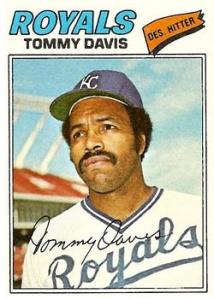 The Orioles part ways after 1975. Tommy latches on with the Yankees, who release him at the end of spring training. The Angels sign him in July of 1976, but the nomadic Davis shuffles off to Kansas City in September- which is the team he is depicted on in his cardboard swan song as a player in 1977. 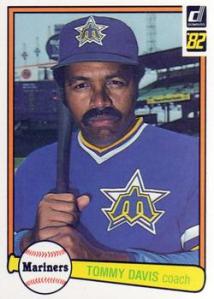 However, there is a career-capper of sorts found in the 1982 Donruss set. Tommy received a card, while serving as the Mariners’ batting coach.
Davis’ trek results in cards on 10 different teams, one more than Ken Brett, as I chronicled in a previous post.

I highly encourage everyone to read the SABR Bio Project Tommy Davis biography by Mark Stewart and Paul Hirsch.