I’ve been selling my pre-war cards. Most of them anyway (there’s a few that I want around). In recent years my collecting has shifted, in ways that bring me great pleasure and, while it’s slightly odd selling off cards that are one of a kind in my collection (selling doubles is so much easier on the emotions), I’ve gotten enormous pleasure from the turnover.

I’m not sure why I have one 1934 Butterfinger Premium, (R310s for you scoring at home) let alone two. The Lloyd Waner made sense at the time, and in retrospect. I was looking for cards of Hall of Famers from their playing days. (Now that I have another “Little Poison,” a 1936 Goudey Wide Pen Type 1, I can let the R310 go).

Bob O’Farrell? I have no idea. 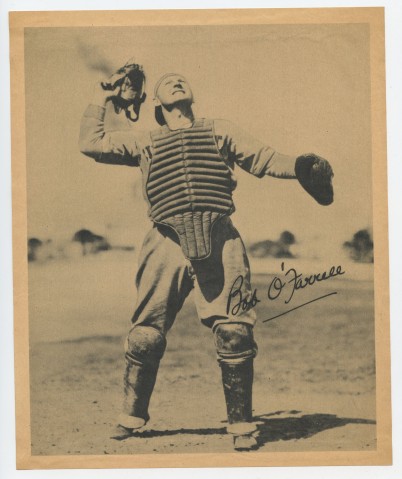 These premiums really aren’t even cards. Large, 7 ¾” X 9 ¾”, paper thin (though there are cardboard backed displays with red ad copy letting a bunch of Dead End Kids and Little Rascals of the decade know they could get their very own Lew Fonseca with the purchase of a nickel candy bar),

and fragile, they’re more like posters (which often make it into the Standard Catalog anyway). The checklist is a nice representation of the player pool, from Ruth, Gehrig and Foxx (spelled both “Fox” and “Foxx”) to Al Spohrer and Ralph Boyle. 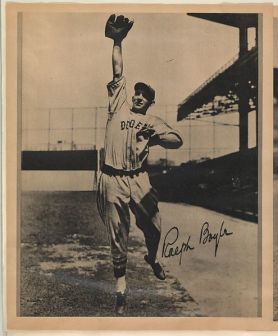 Curtiss Candy Company Ralph Boyle, from the Butterfinger series (R310) issued by the Curtiss Candy Company to promote Butterfinger Candy Bars, 1934 American, Photolithograph; Sheet: 9 7/16 × 7 3/4 in. (24 × 19.7 cm) The Metropolitan Museum of Art, New York, The Jefferson R. Burdick Collection, Gift of Jefferson R. Burdick (Burdick 324, R310.10) http://www.metmuseum.org/Collections/search-the-collections/706325
The cardboard displays are rarer, selling, according to one Standard Catalog, at four times the paper. There’s even a Canadian version, smaller in size, at 6 ½” X 8 ½”, and checklist, less than 60. (These are given a different designation, V94).

They’re nice items, perfect for team and type collectors, and not very expensive, depending, of course, on condition. A lot of them have suffered paper loss from various tuckings and gluings into albums. You can even get a low grade Al Spohrer for $10!

But the biggest mystery to me is why anyone needs a premium to buy a Butterfinger. They’re delicious and worth each of those five pennies.

2 thoughts on “An Unnecessary Premium”