Seventy years of baseball card prose…four cards at a time.

In this installment of my ongoing series, I’ll continue my project in which I examine the baseball card prose for one Detroit Tiger card from each year of the flagship set released by Topps.  We’ll learn about writing craft and baseball history, but we may just learn a little about ourselves…

Design of the reverse: Reduced stats, cartoon, and prose.

Text (59 words, plus 8 words in captions):  Larry showed great promise in his first full seasons of major league ball last year. In April he blasted his initial major league homer to climax a perfect 3 for 3 day against the Orioles. In June his 3 RBI’s helped rout the Red Sox 8-1 and in August he drove in a trio of markers against Kansas City.

Larry’s dad was a major leaguer in 1922 [Larry’s father shows Little Boy Larry how to hold a bat.]

The 1950s were a fascinating time.  The Cold War was heating up, rock and roll was born, and there were three major leaguers who were nicknamed “Bobo.”  Bobo Newsom began his MLB career in 1929 with the Brooklyn Robins and didn’t retire until 1953.  That same year, Bobo Holloman enjoyed his only stint in The Show, hurling in 22 games for the Browns.

Bobo Newsom was referred to by his nickname in his 1953 card: his only Topps flagship card.  Sy Berger and his colleagues, on the other hand, referred to Osborne as Larry in his several Topps releases.  The writers of The Sporting News frequently used “Larry (Bobo) Osborne” when detailing the player’s exploits.  (He was just “Larry” on May 11, 1955, when the News described how Osborne, then with the Augusta Tigers, sidelined righthander Russ Swingle indefinitely by spiking him “on the ankle.”  Swingle’s “gash required 13 stitches.”)

One wonders what the authors thought about the rhetoric of nicknames in those early years.  In 1952, anyway, Harold Henry Reese was “Pee Wee” and Harry Lavagetto was “Cookie.” In 1956, “Pee Wee” received quotation marks, and Cookie went back to “Harry” on his 1961 manager card.

Forrest Harrill Burgess’s career spanned all of Topps’s early years, and he was always “Smoky.”  Later issues in the 1960s didn’t even include his real name on the back of the card.

The issue cuts to the idea of identity formation and the hero worship naturally stoked by baseball cards.  “Smoky Burgess” and “Pee Wee Reese” just sound cool.  Does “Bobo Osborne” have the same ring?  Did Topps use “Larry” because it sounded more traditional?  Did Topps just feel that Newsom, a long-time big leaguer, was the only Bobo?  (Holloman didn’t receive a Topps card until the 1991 Topps Archives “Cards that Never Were” release.  Yes, he was called “Bobo.”)

A nickname lends a kid-friendly familiarity to a ballplayer–think George Herman Ruth–but it can also distance the fan from the player.  Do A-Rod’s close friends call him “A-Rod?”  I can see starstruck fans greeting Mattingly with a hearty, “Hey!  Donnie Baseball!”  The proliferation of digital technology makes it easier for fans to see a player’s real personality if he wishes to share it.  The cost is a loss of the majestic distance I felt when I ACTUALLY saw Alan Trammell and Lou Whitaker in REAL LIFE and they were ACTUALLY playing baseball IN FRONT OF ME.  It’s wonderful to see a video of Trevor Bauer taking his Covid-19 test and eating a healthy lunch before working out on an off day, but does it dull the mystique when I watch him stare down batters on MLB.TV?

There’s another big issue that I need to address with this card and others from 1960 Topps.

There isn’t a single comma in the prose on the reverse of Osborne’s card.  (There should be three, along with a couple hyphens.)  Many 1960 Topps cards feature “Season’s Highlights” instead of traditional prose; punctuation is easier when you’re writing bullet points.  But look at Johnny Callison’s card: 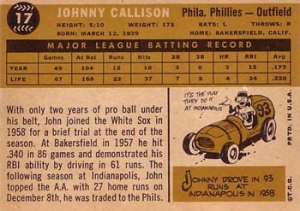 That last bit needs a full stop!  Without it, the sentence implies that Callison hit 27 home runs on December 8th.  There weren’t even any games that day!

Design of the reverse: Full stats, no prose, cartoons

Text (16 words in captions):  Larry showed great promise in his first full seasons of major league ball last year. In April he blasted his initial major league homer to climax a perfect 3 for 3 day against the Orioles. In June his 3 RBI’s helped rout the Red Sox 8-1 and in August he drove in a trio of markers against Kansas City.

Larry’s dad was a major leaguer in 1922 [Larry’s father shows Little Boy Larry how to hold a bat.]

Topps opted to include fuller stat lines, including minor league lines for a player like Osborne.  I wish we could still ask Sy Berger, but I wonder if this was indeed done as a cost-cutting measure, or if Topps wanted to build the players’ identities in a different way.  Statistics certainly tell a story, just in a different way.  A savvy kid could take one glance at Osborne’s stats and see from the man’s .185 batting average why he spent the entire 1960 season in AAA.

I chose to write about two Larry Osborne cards for a couple reasons.  First, that’s what’s in the my one-Tiger-for-each-year collection.  Second, I love that Topps repeated the same anecdote about Osborne.  Larry’s father was Earnest Preston Osborne, nicknamed “Tiny.” (Is “Bobo” better than “Tiny?”)

Tiny pitched from 1922 to 1925 for the Cubs and the Robins.  Only 22 years later, his son was in the bigs.  Ballplayers have long served as father figures to kids, whether or not the real father figure was around.  By emphasizing that Bobo had ostensibly made Tiny proud, a young boy or girl who pulled this card in 1961 might have subconsciously confronted his or her own subconscious desire to please the old man.  The cartoons are also part of Topps’s history of highlighting father-son ballplayer duos. 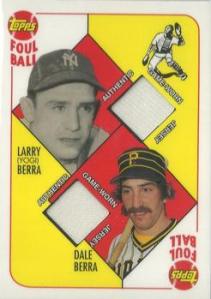 Design of the reverse: Reduced stats, one cartoon, prose

Text (53 words in prose, plus 13 in captions): Terry was considered “just a toss-in” in the deal that sent Frank Bolling to the Braves last winter.  Instead, despite some arm trouble, the righthanded bullpen artist developed into a gem as his 1.42 E.R.A. points out.  He won 12 games in relief in the P.C.L. in 1960.

Terry won 21 games with New Iberia in 1955.  [From behind the umpire, we see Terry in his follow-through.  The ball is halfway to the plate, and the umpire has already extended his right arm into the air.]

Significantly, humor doesn’t seem to have a prominent role in most baseball card prose.  I suppose that there are a few jokes here and there, particularly in cartoons, but I’m not sure how often we see an honest-to-goodness pun like “Terry outfoxes the hitters.”

Perhaps the authors don’t want to diminish the players through the use of humor or risk offending the parents of their target audience.  (Come to think of it, examining humor in baseball cards would be a fun study.)

If you’ll notice, the events in the prose are out of order.  Did the author want to fill up that last line above the stat box?

Oh, and that penultimate sentence is missing a comma.

Design of the reverse: Full stats, cartoon, some prose.

Text (13 words in prose, plus 10 in captions): The righthanded reliever is still undefeated after 2 seasons in the American League.

Howie was in the Armed Forces for part of ’62.  [An annoyed staff sergeant watches Howie go through drills using a baseball bat instead of a rifle.  The rifle says, “BANG!”]

Topps always had affection for prospects and rookies.  As is the case today, the company was hoping to get in on the ground floor with players who would become the next big thing.  (Of course, the money in today’s baseball card ecosystem is completely different…)

The Topps All-Star Rookie designation first appeared on cards in 1961, and Koplitz received the honor on his 1962 rookie card.  Unfortunately, the prose on the reverse of Koplitz’s 1963 issue sounds like the kind of statement we might make in a resume: technically accurate, but perhaps overly flattering.  It’s absolutely true that Koplitz was undefeated in the American League.  On the other hand, he was 5-0 as a starter as well as a righty coming out of the bullpen.

Perhaps most importantly, there is precious little room for prose on the reverse of this card.  In this way, Topps boosts Koplitz in an efficient manner.  The pitcher is undefeated, and if you’re wondering why he’s only pitched in 14 Tiger games over two seasons, well…he was serving our country.  I can’t think of a better way to explain a gap in one’s resume!

And perhaps my sense about the scarcity of baseball card humor is slightly off; note the appropriately Bazooka Joe-esque joke.  (I love the expression on the annoyed drill instructor’s face.)

The amount of prose may be decreasing, but I’m getting ever more excited as I get closer to that World Champion 1968 team.  Next time, I’ll write about a couple of the cogs on that squad and a highly underrated southpaw who was brave enough to strike out the Splendid Splinter the first time they faced each other.

I write and teach. Check out my Young Adult and Contemporary Romance novels at http://www.allisonrhodesbooks.com. One day, I'll write a great baseball novel. Someday. View all posts by Kenneth Nichols