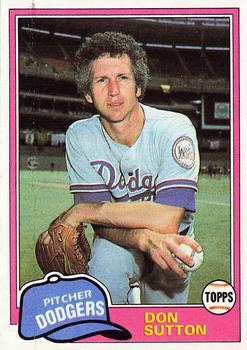 If you avidly collected baseball cards in the 80s, like I did, Don Sutton was a constant presence. From his last couple of Dodgers issues in 1980 and 1981, through his years with the Astros, Brewers, A’s, Angels and eventual return to the Dodgers in 1988, you never cracked a box of wax packs without getting a Don Sutton. The only thing that seemed to change was the color of his trademarked tight-knit and voluminous puff of curly hair. Steel grey for 1980 Topps to stark white in 1988 Score. Don Sutton always showed up and you were happy to have him.

Similarly, Don Sutton was always there for his team when called upon. In fact, in his 23 years in the Major Leagues, he never missed a start due to injury. Think about that amazing feat. He answered the bell through the presidencies of LBJ, Nixon, Ford, Carter, and Reagan without missing a single start. Also, Don Sutton did not just show up every four days, he excelled every four days. 324 wins, 3,574 strikeouts, a 3.26 career ERA and a 1.14 WHIP. An amazing feat, especially for someone who pitched in the shadows of other legends like Tom Seaver, Nolan Ryan and Steve Carlton.

Perhaps the most amazing fact about Don Sutton is that he is the only Dodgers Hall of Famer who never played for the Brooklyn Dodgers. Duke, Sandy and Pee Wee all played at Ebbets Field and Mike Piazza dons a Mets cap on his plaque in Cooperstown.

So, there he is, Don Sutton, standing alone as the only Los Angeles Dodgers Hall of Famer, at least until he is eventually joined by Clayton Kershaw. So, tonight after work, go on eBay and buy a box of mid-80s junk wax. When you get a Don Sutton card, and you will get a Don Sutton card, don’t rush by it to search for a bigger star. Turn over that Sutton card, check out his stats for yourself, and just appreciate his consistency and excellence.