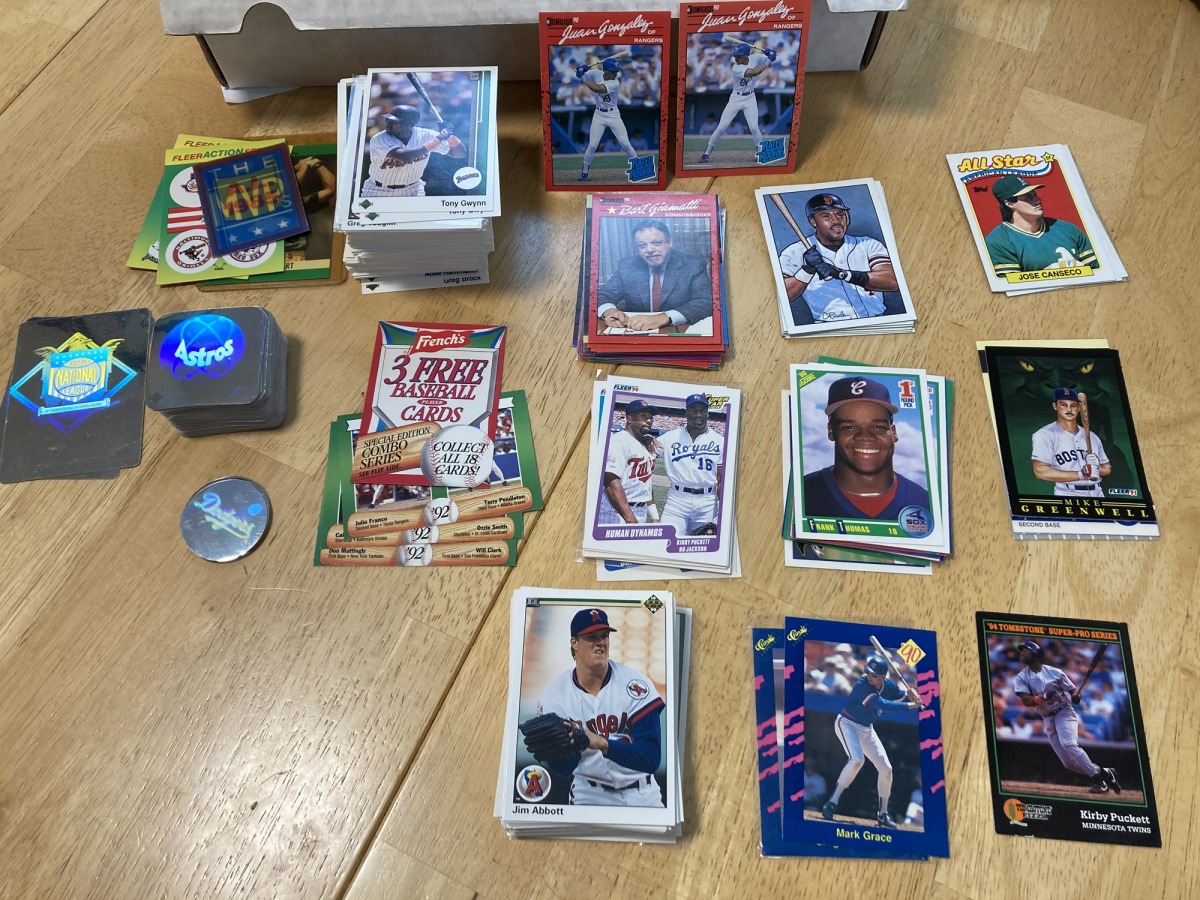 Inside the big box was a smaller box.  A crooked smile crossed my face in curious wonder as I reached for some unknown treasure.  I had just sorted through several things in Uncle Dan’s mystery box of baseball when I came across the familiar white cardboard baseball card box.  Slowly I unpacked the contents as my curious wonder intensified.  The cards I pulled out were just a random hodge-podge.  I was flipping through cards from Score, Fleer, Upper Deck, Donruss, several Bowmans and only a few of my favorite, Topps.  The majority of the cards were 1989s and 1990s.  A few 1988s, and 1991s, as well.  Interesting enough, I found a stack of 1990 Upper Deck hologram logo stickers, too.

Being somewhat compulsive with a need for order, I sorted this jambalaya of cards into stacks that made sense to me: by manufacturer and by year.  I’ll sort them by number later.  With a little bit of hope, I sorted through the 1989 Upper Decks, looking for “The Kid.”  Hoping, maybe, maybeee … Nope, no Junior.  Oh well.  I knew it was too much to hope for.  Regardless, there are some good names in the stack.  I turned to the Donruss pile.  A couple of good things, including a Bart Giamatti card.  I don’t recall if I had ever seen a card for the commissioner of baseball before, but it was good to see.  I like Giamatti, and for a moment I reflected on the scenes from the Ken Burn “Baseball” documentary, wondering what his tenure would have been like had he lived to serve a full term in office.

In the 1990 Donruss stack, I also found something cool: the Juan Gonzalez (#33) reverse-image card.  The card manufacturer erred when they reversed the image of this Ranger “Rated Rookie” so that we see him batting in what appears to be on the left side of the plate, and of course, his uniform number 19 appears reversed.  Fortunately, the correct image card is among the stack, as well.

The short stack of 1990 Fleers included #635 “Super Star Specials” called ‘Human Dynamos” picturing Kirby Puckett and Bo Jackson.  I’m guessing since both players are sporting their home jerseys, the photo was probably taken at the 1989 All-Star Game, which was played at Anaheim Stadium (where Jackson was the game’s MVP).  It’s an educated guess, but I would love to hear confirmation from someone.

I was a little more intrigued with the small pile of 1990 Bowman cards, which warranted a little research.  As it so happened, by 1990 Bowman scaled down the size of their card, to a more standard dimension.  A couple of things piqued my interest.  First, this stack of cards featured a cool Art Card insert by Craig Pursely.  My stack featured Kevin Mitchell.  The reverse side gave a little blurb on the player, while the card also doubled as a sweepstakes entry.  This Art Card insert set included 11 cards.

The other thing that piqued my interest is how the player’s information is presented on the reverse side.  In this instance, only one year of data given, but the analytics are compiled by competitor.  That is, the rows include the player stats, while the columns feature the specific teams.  For example, the Red Sox first baseman/outfield Danny Heep played in 113 games in 1989: 8 vs Orioles; 9 vs Angels; 7 vs White Sox; 8 vs Indians; and so on.  It’s a squirrelly way to present the data, if you ask me.  I feel bad for the person that had to put all that together for all 500+ cards.

A couple of interesting things that stood out was a 1990 Score Tombstone Pizza Kirby Puckett card (number 25 of 30), a 1992 mini-set of three “Special Edition Combo Series” cards from French’s Mustard.  The three in my set include: Julio Franco/Terry Pendleton (#3), Don Mattingly/Will Clark (#11) and Cal Ripken Jr/Ozzie Smith (#13).  Brief information on each player (bio, stats, two-sentence blurb) is found on the card’s reverse side.  The 1992 Combo Series featured 18 cards with 32 players.  That is a lot of mustard to buy!

I’m still struck by this unusual collection of cards, and wonder about the original collector’s motivation and frame of mind.  Such a wide assortment.  It also makes me want to read up again on this era of cards, when it seems like the wild west of cardboard and baseball players, with everyone and his brother looking to cash in on the collecting craze of the late 1980s/early 1990s.

Uncle Dan’s mystery box of baseball cards continues to provide an ongoing sense of wonder, if not source of amusement.  But wait, there’s more …

3 thoughts on “More from Uncle Dan’s Mystery Box of Baseball: A Real Jambalaya”