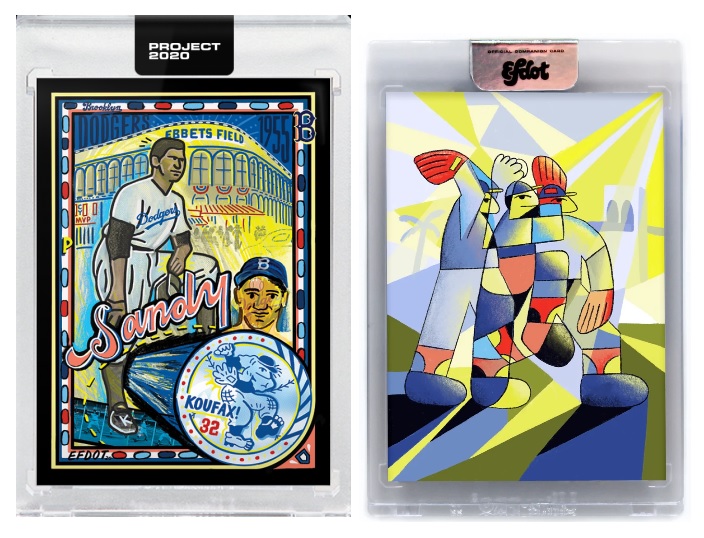 In case you missed it, SABR Baseball Cards Research Committee co-chair Nick Vossbrink published his “On Thinking about What Makes a Card a Card” piece a couple weeks ago, offering readers and collectors a framework for thinking about cardness.

In the comments I referenced a particular card (or non-card) genre likely unknown to much of our readership, so I thought a full blog post might be a better way to keep up the “what makes a card a card” (WMACAC) conversation.

I put an asterisk because the Ted Williams, Willie Mays, and Jackie Robinson cards were simply first Topps cards (FTC), the Nolan Ryan was his first solo card, and the McGwire has its own debate surrounding it. One could perhaps quibble over Update set XRCs as well, and of course the Mariano Rivera is a Bowman. Still, you get the idea!

Early cards in the set tended to stay very true to the original RC, as shown by my Tyson Beck card of Dwight Gooden, which was card 12 of the 400 cards that made up the set. Later cards tended to drift a bit more as the artists took greater and greater license. For example, my Efdot Dwight Gooden, which was card 137 overall, retains none of the design elements of the 1985 Topps set but more than makes up for it with its timely tribute to healthcare workers.

One of my favorite cards in the set is the Efdot Sandy Koufax card, which deviates considerably from the layout and design of the original Topps classic but retains enough elements to be clearly derivative. (In general, this was my personal “sweet spot” for the project: very different from the original but not wholly unrelated.)

If we stop here and ask, “Is this a baseball card?” I have to imagine a nearly universal answer of yes. Granted, it might not be a card you collect personally, and it’s clearly not a card from Koufax’s playing career. However, it checks off nearly every category of cardness.

Where baseball cardness gets more interesting is with the collections of art pieces many of the artists issued independently as companion cards to their Topps releases. Unlike their official Project 2020 cards, these cards were neither produced by Topps nor licensed by MLB, MLBPA, or the representatives of any retired players.

As an example, here is Efdot’s Left Arm of Blob, based on a turtle-like Blob character Efdot uses in his murals and other designs.

This companion card has many features suggestive of Sandy Koufax. Among them are the left-handed pitching motion, the stylistic nod to Jewish artist Marc Chagall, and a healthy dose of Dodger Blue, even if non-exact. On the other hand, I don’t think many baseball fans would regard Blob as a dead ringer for Mr. Koufax. Furthermore, there is no name, team, or logo to assist.

If we accept the idea that even a generic baseball player is enough to establish baseball cardness then Left Arm of Blob definitely gets my vote for being a baseball card, even lacking the imprimatur of a card-making goliath like Topps, Upper Deck, or Panini. However, I believe a more fun question to ask is whether Left Arm of Blob is a Sandy Koufax baseball card.

While the answer is likely no on a technical level, I have always been of the mindset that the collector is always right. As such, I do consider Left Arm of Blob a welcome addition to my Sandy Koufax collection, primarily for two reasons. First, the card is clearly Koufax-inspired (or at least Koufax card-inspired). Second, the card was specifically designed to go right next to the real Sandy.

I know many collectors these days who prefer not to decide such matters for themselves but prefer to see how the Hobby establishment opines. For example, will we see Left Arm of Blob in PSA’s Koufax “super set” or as an entry on Trading Card Database’s Koufax pages? And before you say, “No chance!” to the former, here is a Babe Ruth card from PSA’s Bambino master set, batting righty no less!

Though there is precedent for nearly everything new in the Hobby, I’ll offer that the idea of a companion card is at least new enough in today’s consciousness to preclude consensus. However, many of this year’s Topps Project 70 artists are producing and distributing companion cards, meaning we will soon have a much larger sample size on which to equivocate. We will also be forced to reckon with companions as “a thing” rather than some flukey one-off that only happened in the weirdest year of our lives.

In the grander scheme, what we do know is that Left Arm of Blob is simply one of many novel card-ish objects that will continue to defy or at least challenge classification as the Hobby evolves into the future. Whatever boundaries we establish, save none at all, will be pushed for at least as long as imagination and innovation continue to assert a place in the Hobby. Any fuzziness and inconvenience that arise should be considered far better than the alternative!