“There are two laws of the universe – gravity, and everyone likes Italian food.” – Neil Simon, supposedly.

The photos on baseball cards have the power to fire imaginations. A player fresh up from Evansville with four big-league games under his belt can convince a young collector (OK, grown-ups too) that he’s a future Hall of Famer, just from the tilt of his cap and the confident look in his eye. A lad so strapping and foursquare must have The Right Stuff, no?

Another example: Every team on an old-fashioned team card looks like a well-oiled machine. Looking at those orderly rows of players in their clean uniforms, it’s tough to imagine them running into each other, or watching a fly ball drop uncaught, or air-mailing a throw to the cutoff man.

What’s shown in the background of cards can also get the imagination going. I recently noticed a recurring sign in the Montreal Expos’ long-ago spring-training ballpark in Daytona Beach … one of those things you don’t stop seeing once you’ve picked up on it.

And ever since I noticed it, I’ve been craving Italian food.

It shows up most clearly behind Ernie McAnally’s left shoulder in 1975, next to the crudely painted sign where the “Cola” tilts askew from the “Coca.” See it? PAESANO.

Either Topps used an old pic in ’76 or the sign was still there at City Island Park a year later, because it shows up pretty clearly on Woodie Fryman’s card. PAESANO. 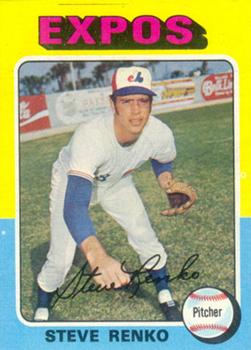 Going back to ’75, it’s not quite as clear on Steve Renko’s card. But once you’ve seen it elsewhere, you know it’s the same sign. PAESANO.

Like the melody of a lonesome accordion trickling in through an open window, it’s only hinted at on Balor Moore’s ’75 card. But again, once you’ve seen it, you recognize it. PAESANO. (The ’75 Don DeMola cheats us cruelly of a fifth PAESANO, though it surely gladdened the heart of your neighborhood Coca-Cola bottler at the time.)

Other bloggers have pointed out that Topps seems to have intentionally obscured outfield signs on several 1977 Expos cards. Perhaps if they had done the same thing here, I would not currently be dreaming about a dimly lit old-school ristorante at which mammoth plates of spaghetti are accompanied by bottles of affordable yet forthright red wine.

(This is a key part of my PAESANO fantasy. In my head, it’s not just an Italian place; it’s a Seventies Italian place, like my grandparents might have known. There’s vinyl involved, and those wrapped Chianti bottles, and Chevy Impalas like the one my grandfather owned parked outside.)

I’ve devoted entirely too much time to researching this on Newspapers dot com over the past few days … and of course I know nothing more than I did when I started. I don’t even know for absolute certain that PAESANO was a restaurant. It could have been an ad for Richie Paesano & Sons 24-Hour Towing.

I’ve found old print references to at least two Florida restaurants called Paesano or Paesano’s, though, as I recall, neither of them were in Daytona Beach nor tremendously close.

Intriguingly, back issues of the Montreal Gazette indicate that a restaurant called Paesano — complete with distinctive typeface — was a mainstay of that city’s formal dining scene in the early to mid-1970s. (The ad below ran in the Gazette on March 18, 1974.)

Expos spring training reportedly attracted a flood of Quebeckers each year, and it would have been a slick trick for a Montreal business to take advantage of their mal du pays and promote something they could enjoy when they got back home. That seems like a little bit of a stretch to me, though.

I’ve scoured the Gazette and the Orlando Sentinel in search of a clear, unencumbered photo of the sign, to no avail.

The Sentinel used to write up the games of the Daytona Beach Dodgers, who played in the same park, but they never seemed to send a photographer. The Gazette cared enough to send a lensman to Expos spring training each year — but they only ran one of his photos each day, perhaps because they ate up space that could be devoted to the Montreal Canadiens’ latest playoff run.

The only view I’ve found so far is in a photo that ran February 28, 1975. Five Expos pitchers are hamming it up, giving the cameraman the ol’ prosciutto, and peeking out between two of them is just a hint of PAESANO. 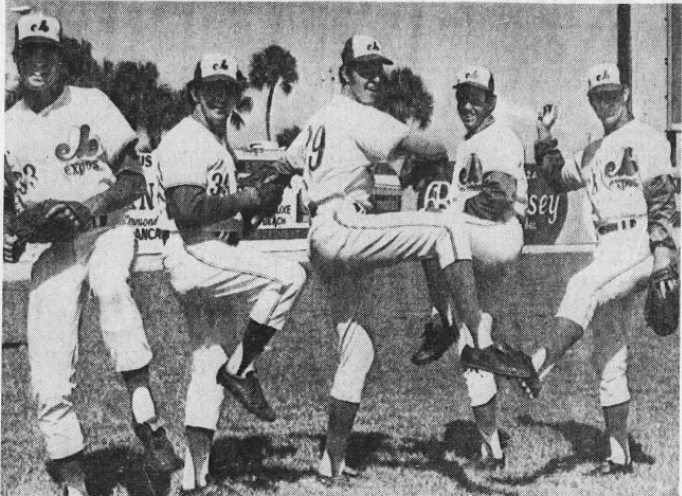 Of course this view raises more questions than it answers. The partial word “ANCA” is visible between Chip Lang and Dan Warthen at far left. I can only think of one food-related word in English that involves the letters “ANCA,” and it’s “pancakes” … not exactly the kind of food you find at a fancy-night Italian place. (Might PAESANO have been a diner instead?)

I might never know the full story of PAESANO. But it doesn’t really matter.

Once again — has it happened a thousand times since I was a boy? Ten thousand? — I’ve been reeled in by the image on a baseball card. My brain has locked in and started sparking, setting scenes, telling stories. I relish that feeling. It’s part of what keeps me buying cards, and paging through binders, and picking up cards and holding them in my hand. Without that connection, it’s all just piles of cardboard.