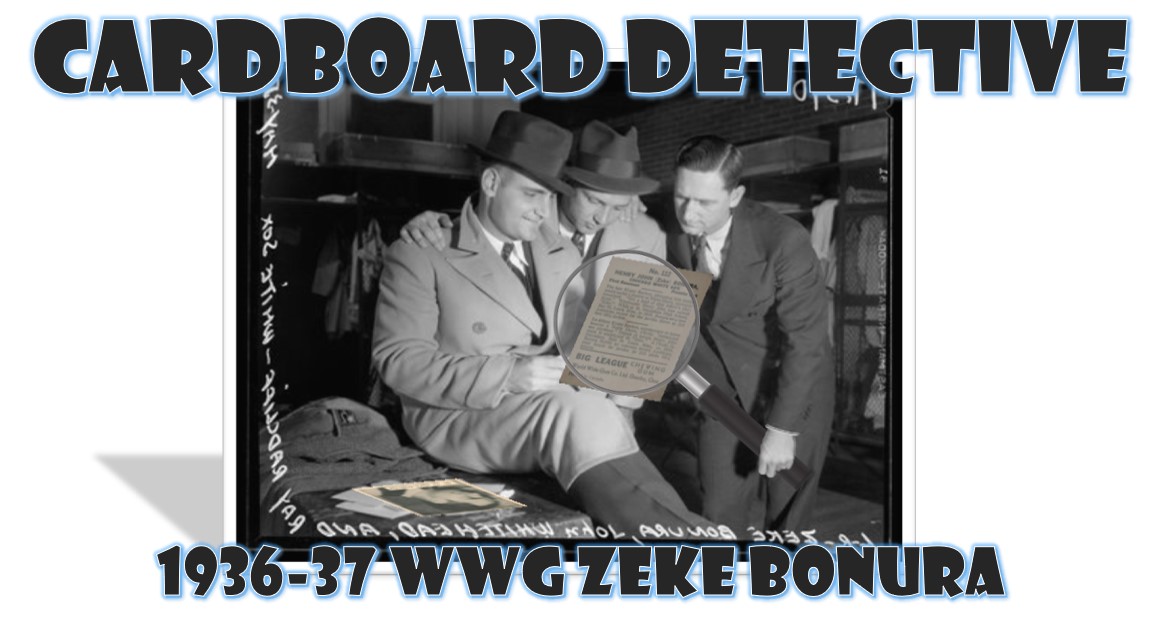 White Sox slugger Zeke Bonura has one of the more unusual baseball cards of the 1930s, courtesy of the 1936-37 World Wide Gum (V355) set sometimes known as Canadian Goudey.

Notably, the dapper Bonura is sporting a tie and vest ensemble rather than any baseball-related garb. (Oddly enough, the very next card on the checklist is of a fellow White Sox infielder, dressed almost identically.)

One might initially assume the two teammates were photographed at the same event, perhaps a banquet or the opera. Or might they have joined this man, dressed to conduct an orchestra or star in a Dracula movie, for a simple night on the town?

No? Okay, any chance Bonura, if not all three of these debonair gentlemen, were en route to this September 1935 watermelon eating contest?

Getting warmer but that’s still not it. If we’re gonna solve this mystery we’ll need one very important clue.

When Zeke wasn’t playing ball with the White Sox, he was often back home in New Orleans where according to this January 20, 1935, article (Nebraska State Journal) he “wrestles crates of produce, takes orders and makes himself generally handy around his father’s produce store.”

As it turns out, Bonura not only spent his winter months neck deep in fruits and vegetables but many springs as well. “Mentioning that Bonura is a holdout is about the same as saying that the sun will rise in the East tomorrow morning,” observed the Sporting News (January 14, 1937). Two years earlier, the same publication had Bonura “[speaking] up from the recesses of his father’s market in New Orleans” regarding his 1935 contract holdout. Bonura’s SABR bio has him holding out four straight years from 1935-38.

My understanding is that the fruitless negotiations went something like this:

But lettuce at last return to the baseball card that began this article. If you haven’t guessed it already, it’s this other job—Bonura as fruit merchant—that the card depicts. Look carefully at the backdrop behind Bonura and you’ll spot various crates of produce. To the left of his forehead are the letters “TAIN,” which I suspect come from one of the many fruit crates of the period with “MOUNTAIN” on the label. Similarly, the “ON U.S.” by his chin is likely a fragment of “WASHINGTON U.S.A.” or “OREGON U.S.A.,” two states known for their produce. Look closely and you may recognize other words as well.

Though it’s possible the World Wide Gum card’s photograph was taken during the winter months, my sense is it’s more likely to be a spring photo since that’s when Zeke as fruit merchant would have been more newsworthy. If so, I have to imagine the 1936-37 WWG Bonura card is the first (and probably only) baseball card of a player actively holding out for more money.

Author’s Note: I believe the site of the baseball card and newspaper photos would have been at Bonura Wholesale Produce (and/or John Bonura & Company), located at 200 Poydras Street in the New Orleans French Quarter. While the business no longer stands today, there is a Gordon Biersch brewery and restaurant where you can raise a glass (or enjoy some seasonal vegetables!) in Zeke’s honor.