I’ve never been much of a believer in signs or fate. Sometimes, though, happy coincidences can lead to a feeling of slight disbelief and a raised eyebrow.

Over the past month, there have been a couple of events here in Pittsburgh that I was fortunate enough to attend, They commemorated the centennial of the founding of the Negro National League (NNL). It’s altogether fitting that institutions in the region mark the anniversary, as this area was home to two famous franchises in black (or any color) baseball history; the Pittsburgh Crawfords and Homestead Grays.

A few weeks ago, the mayor and some other folks gave short speeches at the City-County Building at the opening of a temporary Negro League display located there. Then, on Thursday, February 13th (100 years to the day that the NNL was founded), a panel including former Pittsburgh Pirates star Al Oliver and Josh Gibson’s great grandson Sean, spoke at the Heinz History Center about the leagues in general. The discussion was pretty free-form, covering the impact and influence on baseball that the players and owners had, as well as a wide range of other topics. It was here where the card collecting angle comes in to play.

One member of the panel, noted Black Baseball historian Rob Ruck, made mention of 1988, when the Pirates organization officially apologized for their role in baseball segregation. While I’d be loathe to truly praise them for this action (first of all, segregation, secondly, it took 40 years!), the club was one of the earliest, if not the first, to own up to the injustice.

That night’s ballgame included a pennant raising in honor of the 40th anniversary of the Homestead Grays’ 1948 Negro World Series victory.  Ruck mentioned that, also that season (may have been the same night), the Pirates held a card set giveaway. The cards were printed in sheet form and showcased a number of images of famous Negro League characters. Professor Ruck had played a role in the set creation back then, providing info for the backs in the age long before Wikipedia and Ancestry.com were a few clicks or taps away.

Professor Ruck’s mention of the card set reminded me that I was at the giveaway game with my family, because, as I immediately mentioned to my buddy sitting next to me, I fondly remembered having that set. They were somewhere in the mix with my junk wax collection, conciously purged around the time when my parents moved a dozen or so years ago.

So, two days after the panel event, I visited my parents’ (current) place. No sooner did I walk into the house than my mom mentions, “I was cleaning and found some old cards for you.” As some of you may have foreseen in the amount of time since I finished the first sentence of this paragraph, laid out on the guest room dresser were three sets of 1988, Pirates team issued Negro League cards, uncut and neatly folded.

Somehow, they weren’t cast out along with my collection. Likely because they were stored elsewhere. My memory is limited, but I’m willing to guess that these belonged to my parents and sister, landing outside of my eight year old reach. Mine were probably systematically separated and made into standard card form. I’m not 100% positive, but they probably disappeared with those thousands of other cardboard sports ephemera of my youth years ago.

Having these appear again is both neat, and a little spooky. It’s as if a passing mention of the set caused the cards to materialize out of thin air. I’m excited to be able to add these into my collection (haven’t checked with the others in my family, but confident they’re not interested). It’s an ‘oddball’ collection of true historical interest, and a great group of early card examples of many of the biggest names that never had the chance to play in the majors.

Also, if anyone is looking for a set…you now know who has two duplicates.

So being a relatively new member (if ‘relatively new’ can mean ‘a few years’) to the organization, and a first time attendee, one goal I had for SABR 48 was to introduce myself to a number of committee chairs. Considering myself a relatively abysmal conversationalist, I wanted to try and think up some hook of an idea to engage folks. It usually involved a slightly unique question.

Now, if you’ll humor me, I’ll pose the question (and reason for it) that I had approached Mark Armour with, in the hopes that someone can come up with something more on the topic.

Does anyone know when the earliest Kennesaw Mountain Landis card was produced? When I had asked Mark, all we could think of were examples from those early ’60s Fleer old-timer sets. A quick ebay check shows something called a Callahan with him on it from around 1950, but I can’t locate anything earlier.

The reason I ask this is: I have recently become enamored with those mid 1930s National Chicle sets. The cards are brilliantly-colored, art-deco masterpieces. Unfortunately, the baseball set involves star cards that are a bit out of my budget. Meanwhile, the football set involves star and non-star cards that are, for the most part, out of everyone’s budget.  However, in 1934-35, a set was made that highlighted famous aviators from the previous 31ish years called Sky Birds, which provides a neat gateway to learning about aviation (and a lot of WW1 aviation) history. The set also happens to be downright affordable, especially if you’re not looking for slabbing material. So I’ve picked up a bunch.

Learning about the stories of these pilots has been fascinating. Get a card, do a Wikipedia search, and you find out about the Lafayette Escadrille, or the greatest WW1 flying ace from (insert country here), or some other tidbit (I have a beaten up dupe of the guy who flew the first non-stop, coast-to-coast flight, for anyone interested). They’re all pretty great. But there is one particular card that includes a flying ace from WW1 with a name and facial structure that looked somewhat familiar to me. He wasn’t anyone I had known of before, but then I’ve always been pretty ignorant when it comes to ‘The Great War.’ His name was Reed Landis, and based on his Wikipedia bio, he has been credited with twelve aerial victories. 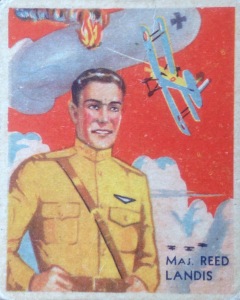 And as you’ve probably logically determined by now, he was a relative of Judge Landis’s. Specifically, a son.

I’m not going to give you some kind of fleshed out rundown of his backstory (or frontstory) here, because I’d essentially be copying info from a much more detailed Wikipedia entry. But I will pose the question again in slightly altered form: does anyone know if Kennesaw made it on cardboard before his son did? It’s interesting  to think that, quite possibly, one of the most powerful men in baseball history was beaten to the medium of collectible cards by his own flesh and blood.