The abstract below is based on a report that was originally delivered before a SABR-Quebec regional meeting on November 5, 2011. It has been revised and updated to reflect events and accuracies which occurred since that date. 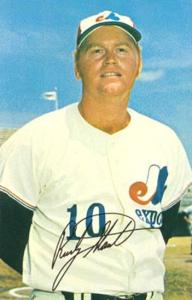 Modest as their success may have been on the field, the Montreal Expos introduced many innovations in their Gallic interpretation of Major League Baseball. During the early years at Jarry Park, it was not uncommon to see fans dancing in the aisles or attending the game with a pet duck. Wearing tricolour caps – bleu-blanc-rouge to honour hockey’s legendary Montreal Canadiens – the Expos introduced a seemingly indeterminate logo which was actually a stylized letter M. Moving to Olympic Stadium, the Expos and their fans often erupted in a chorus of “The Happy Wanderer” during a rally, usually led by an ursine mascot named Youppi. If an opposing baserunner led off 1st or 2nd base but did not steal, chicken sounds were the order of the day on the scoreboard. The Expos were the first team to play two national anthems and the first to sell mineral water. Although the Expos rarely issued a yearbook, they did produce a postcard set in each of their 36 years in the National League. 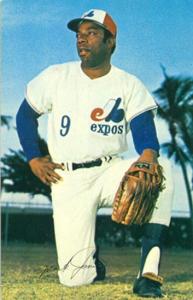 The postcards were sold by the Expos at concessions, first at Jarry Park and then at Olympic Stadium. In addition, a supply of postcards was printed every winter for autograph purposes for the Expos’ annual winter caravan. If a fan wrote an Expos player for an autograph in the mail, it was not uncommon for his or her signed personal items to be accompanied by a signed postcard. Several players, including Steve Renko and Ernie McAnally, were sending signed postcards to autograph collectors long after they retired from baseball.

In 1971 there were two Expos postcard sets. In addition to the official set produced by the team, a second set was produced by a Montreal company called Pro-Stars.   The photos were colour images taken in spring training at West Palm Beach Municipal Stadium. There were 27 players included in the set, along with manager Gene Mauch. The Don Hahn card is particularly hard to find, as he was traded to the New York Mets as the cards were going to press. Consequently, the Hahn card was issued in very limited quantities. Although the set was popular with collectors, the Expos did not engage Pro-Stars for additional sets subsequent to 1971.

Most of the postcards during the Jarry Park era were mugshots, or in the case of the 1969 set, posed shots. However, many of the players who joined the team midway through the 1976 season were immortalized on their postcards with action shots. For example, after Andre Thornton was acquired from the Chicago Cubs in June 1976, he was shown batting during a game at Jarry Park on his postcard. The Olympic patch worn on the Expos’ sleeves that summer is easily visible.

For the last thirteen years of their history, the Expos wore blue pinstriped uniforms with “Expos” written in a cursive, Dodgers-style script. Postcard photos were taken with a blue background from 1992 to 1996, and a beige background from 1997 to 2004. When it appeared the Expos may have been slated for contraction in 2002, the team issued a black and white postcard set depicting the stars of yesteryear. Some of the players to appear in this postcard set included Steve Rogers, Ron Hunt, Ron LeFlore, Buck Rodgers, and Tim Burke. Although the Expos and Major League Baseball survived the 2002 season, baseball in Montreal had only two more years before the franchise was moved to Washington.

Most of the photos on the Expos postcards were snapped by Denis Brodeur. The official photographer of both the Expos and the Canadiens, Brodeur had been the goalie for Team Canada who won the bronze medal in hockey at the 1956 Winter Olympics in Cortina d’Ampezzo, Italy. Brodeur was also the father of NHL superstar goalie Martin Brodeur. In 1996, a collection of Brodeur’s baseball imagery was showcased in a French language coffee table book about the history of the Montreal Expos. Many of the postcard photos were reprinted in the definitive history of the Expos, a two-volume set written in French by Jacques Doucet and Marc Robitaille. Brodeur died in 2013, age 82.

The question remained: who got to be photographed on an Expos postcard? Most of the stars and regular players were issued a distinct postcard every year. In 1970 and 1971, as the Expos were marketing Rusty Staub as the franchise’s marquee player, there were several postcard varieties for the affable redhead known as ‘Le Grand Orange.’ Nine players who appeared on Expos postcards were ultimately immortalized with plaques in Cooperstown. Besides managers Dick Williams and Frank Robinson, and coaches Duke Snider and Larry Doby, this roster included Tony Perez, Gary Carter, Andre Dawson, Pedro Martinez, and Randy Johnson. The Johnson postcard, issued in limited quantities in 1989 in light of his trade to Seattle in May, is considered to be the most valuable in Expos history. It was the Big Unit’s rookie years and has sold for as much as $250 if it can be found at all.

What about the coaches, midseason acquisitions, or September call-ups? In 1969, since the postcards were not issued until midseason, players such as Manny Mota, Maury Wills, Mudcat Grant, and Donn Clendenon were not included because they had already been traded to other teams. In most subsequent years the postcards were released at the beginning of the season in April. Photos for supporting cast members, including coaches, were often reused the following year. For example, Fred Breining was on the disabled list for most of 1984 and all of 1985, his two years with the Expos. The same photo of Breining was used in both sets.

According to Jacques Doucet, who broadcast Expos games for most of their history, Brodeur snapped most of the player photographs for postcards in spring training. If a player on the 40-man roster spent the season in minor leagues to be recalled in September, his photograph would be ready for a postcard. Take the shortest career in Expos history – one day. That was the extent of Curt Brown’s tenure with the Expos. He was included in the postcard series in 1973. On the other hand, in 1996, Rick Schu’s contract was purchased from Ottawa in August before being outrighted back to the Lynx a week later. Schu was not given a postcard. Similarly, Leo Marentette was recalled from AAA Vancouver in 1969 in time for an Expos’ California road trip. As the team prepared to fly east, Marentette was returned to Vancouver. He never had a postcard either.

As for midseason acquisitions, it often depended on the player and how late in the season he was acquired. After ten second division finishes, the 1979 Expos found themselves in a pennant race with the Cubs, Pirates, and Phillies. Once their division rivals in Pittsburgh acquired Bill Madlock in a trade with the Giants, the Expos had to counter. On July 20, they brought back Rusty Staub in a trade with the Tigers. Considering Staub’s popularity in the early years of the franchise, it went without saying to print batches of a new Staub postcard to be included in the 1979 set. However, the next year, after the Expos acquired John D’Acquisto and Willie Montanez in separate trades with San Diego at a similar juncture of the season, neither player was included in the 1980 postcard set.

Generally speaking, superstars like Gary Carter, Andre Dawson, Tim Raines, Vladimir Guerrero, and in 1984, Pete Rose, have generated the most attention for their postcards. However, this was not always the case. When Bill Lee joined the Expos in 1979, he was depicted on his postcard sporting a Grizzly Adams-style beard. The Powers That Be in baseball, already dismayed by admission to sprinkle marijuana on his organic buckwheat pancakes (as it made him impervious to bus fumes when he jogged), pressured him to shave the beard. He complied early in the season and almost as soon as he shaved, his postcard was replaced. The bearded Spaceman postcard remains a collector’s item.

In 1981, Jerry Manuel’s postcard was at the centre of a different controversy. Unlike Jerry Seinfeld’s proclamation in an episode of “Seinfeld” many years later, Manuel never spelled his first name with a G. However, you would not know that by his postcard, which identified the infielder as ‘Gerry Manuel.’ The postcard was quickly recalled and replaced an orthographically accurate ‘Jerry Manuel.’

One of the more unusual stories surrounding an Expos postcard involves another members of the 1981 Expos, Steve Ratzer. Although his Expos career was limited to 13 games, the Ratzer postcard remains one of the more popular issues in franchise history. First off, the postcard was printed for only two months of the year as Ratzer was assigned to Denver during the midseason players’ strike, not to be recalled when the rosters expanded.

Further to that, Ratzer is a member of the Jewish faith. According to Vancouver-based hobbyist Ernest ‘Kit’ Krieger, the only two ethnic identities whose members collect cards of players who share their identity are Cubans and Jews. There have been several Cubans to play for the Expos and have a postcard, including Tony Perez, Bobby Ramos, and Nelson Santovenia. By contrast, Ratzer is considered to have been the only Jewish player in Expos history. Everyone with a Jewish collection wanted the Ratzer postcard. Furthermore, until the publication of the Jewish Major Leaguers set by Fleer in 2003, the postcard was the only major league card of any sort Ratzer had. When the author sent Ratzer a postcard to be autographed, his request was returned four months later along with a note of apology – he wanted to hold onto the

postcard because he didn’t otherwise have one! (Ed. Note. Norm Sherry, who coached for the Expos for four years, is Jewish and appeared on postcards)

The Expos, through the lens of their postcard sets, provided a unique history of the team and its players from the expansion season of 1969 through 2004, the final year for the franchise in Montreal. Not only did the postcards tell the story of the players, but for many fans, they evoke memories of particular game or meeting with a particular member of the team. For example, the first postcard I ever owned was a Tom Foley card from the 1988 set. Foley was distributing them on the Rideau Canal in Ottawa as part of the Expos’ Winter Caravan. Along with Rex Hudler and Brian Holman, Foley took part in a skating demonstration. But Canadian winter sports didn’t come to Foley as naturally as baseball had. “What do they want from me?” he asked rhetorically, “I don’t know how to skate – I’m a Georgia boy!” Sixteen years later, as a coach for the Tampa Bay Devil Rays, he was reminded of his winter trip to Ottawa. Do you think he remembered? You bet, he remembered!