The Franklin County Kansas Historical Society was formed in 1937, and along the way we have acquired quite a few interesting donations.  We have a pretty tight acquisitions policy — if an item does not have a strong tie to Franklin County, we pass on acquiring it. That limits your ability to add baseball cards to your collection when you live in a county that has only produced two major leaguers.

Our first big leaguer was Lou McEvoy, who pitched for the Yankees in 1930-31, but was a long time Pacific Coast League player so he appeared on Zeenut cards in 1929 and 1933-36.

Willie Ramsdell was a knuckleballer from Williamsburg, Kansas. He appeared on the 1951 and 1952 Bowman sets, the 1952 Topps set and 1953 Mother’s Cookie set. Below is a picture of a recent item we had on exhibit at the museum, I lent the cards pictured to the museum.

While the FCHS do not have any cards in the collection of the players above, we do own the two cards below. 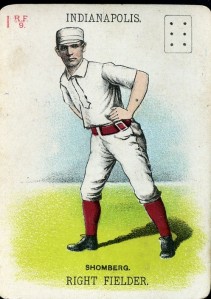 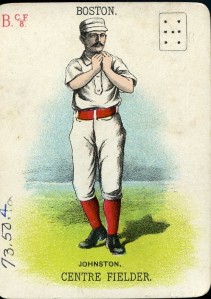 These are WG1 Baseball Playing Cards, manufactured in 1888. These cards were sold as a boxed set, and they depict nine players for each of the eight National League teams that year.  You forgot that Indianapolis was in the NL that season didn’t you?

Otto Schomberg is the right fielder for Indianapolis and in the upper right-hand corner you can see there is a playing card with six pips on it.  All eight of the right fielders are sixes, which is the lowest valued card in the deck of this game. Catchers are aces, pitchers are kings, and shortstops are queens.  I guess the game designer must have assigned the value according to his perception of the defensive spectrum at the time.

Along the bottom left edge of the Dick Johnston card you will see a number scrawled in ink. That is a Franklin County Historical Society catalogue number, and I was horrified when I saw it.  “You wrote on it?!?!”  But that is how museums do things.  Still I shudder a little when I see it.  The Schomberg card is similarly marked, however at least that one was done on the back.

The set has some interesting players, such as Connie Mack as a catcher for Washington and the reverend Bill Sunday is the Pittsburgh right fielder.  Along with Mack, Hall of Famers John Clarkson, Sam Thompson, Ned Hanlon, King Kelly, Pud Galvin, Tim Keefe, John Ward, Cap Anson, Dan Brouthers, Roger Connor, and Deacon White are all pictured. That’s a total of 12 in a set of just 72 cards.

You may be wondering, why we have these cards in our collection since they aren’t Franklin County natives? Well, I don’t know why we have the Johnston card, he has no apparent ties to the county. Schomberg however died in Ottawa, Kansas, on May 3, 1927.  Schomberg was returning to his home in Milwaukee from California via train. He had a heart issues and passed away on the train as they were passing through Ottawa.

However, there is one other card in that set, which we do not have, that has a fascinating tie to Franklin County, Charlie Bennett. 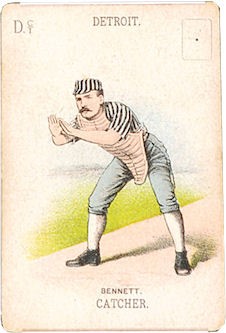 In 1893 the 38-year old Bennett caught about half the games for pennant winning Boston Beaneaters. That winter he and John Clarkson along with their wives went to Williamsburg, Kansas to train together for the next season. Bennett’s sister, Elvira Porter, lived in Williamsburg and this was the third year he had wintered there according to the Wellsville Globe.

In 2016 when we created an exhibit entitled “SMALL-TOWN BALL: PLAYING AMERICA’S GAME IN OTTAWA AND FRANKLIN COUNTY.” Diana Staresinic-Deane told the story of Bennett’s accident this way.

“Although accounts vary from newspaper to newspaper, it is believed that Charlie Bennet had been preparing to go to New Mexico on a hunting trip and traveled to Kansas City on January 10 to purchase supplies. While on the train returning from Kansas City he was in a (possibly heated) discussion with another passenger who he followed out onto the platform at Wellsville, Kansas.   When the train began to move, Bennett attempted to board the car, but as he grasped the rail, his right foot slipped and threw the leg under the car. According to the Ottawa Daily Republican, “Bennett says that he heard the bone crack, realized the accident and threw himself down in an effort to roll the other leg out of danger, but the fall instead resulted in throwing it, too, under the cruel wheels.”

Fortunately for Bennett, Dr. Lamphear, a surgeon with the Kansas City Medical School, was also on the Santa Fe that day, and he was soon joined by Wellsville’s Dr. Ewing.  Both of Bennett’s legs were crushed and Dr. Lamphear severed one foot which hung by a shred. Bennett was then transported to Ottawa, but according to the Ottawa Daily Herald, the hospital could not receive him. Bennett was then moved to a hotel – possibly the Marsh House – where Drs. Herr, Bryan, and Ewing amputated both legs, one above and the other below the knee. Bennett was eventually moved to the Santa Fe Railroad hospital in North Ottawa, where he began his recovery.”

How would you like to be the maid that had to make up the room after that?

All the cities mentioned above, other than Kansas City, are within Franklin County.  The accounts above are pulled from local newspapers at that time, so the story may vary from what you have read in other places.