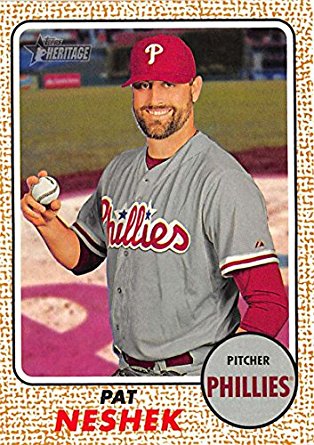 I’ve had a few opportunities to be in the Colorado Rockies clubhouse and to ask players about memorabilia they collect. Those who do collect are few and far between, though Mark Reynolds has a pretty extensive Hall of Fame autograph collection.

Pat Neshek, who was acquired this past July by the Rockies from the Philadelphia Phillies for their wild card push, is a bit of a throwback in that regard. He loves collecting baseball cards and autographs. His passion comes across in the many interviews he gives on card collecting, how he interacts with his fans on Twitter and his eagerness to autograph any cards he receives. Not only does he collect cards about himself, but he approaches collecting with a professional eye as he cultivates cards that improve his 1970 Topps set which in 2014 was ranked third best in quality in the world. He’s since improved that to the best set in the world. Recently I got the chance to talk to him and ask him about his favorite cards and his collecting beliefs.

Richard Bergstrom (RB): Do you remember the process for getting pictured on your first card?

Pat Neshek (PN): The first card you get is when you are in the minors, when you will get one with your team. It was in 2002 with my first team, the Elizabethon Twins. But my first Topps card was a 2006 Box Topper.

You had to buy a case of cards, then if you opened the case the Box Topper is the one on the top. They weren’t even in pack, but that was my first card. There were 50 different box toppers so your chance of getting it was 1 in 50 so it was really hard to get. They made 600 of my Box Topper and then they made a refractor of that. Twenty-five of those — it was pretty cool that Topps did that but I had to rely on eBay to get those. Once, I actually did buy four cases and I did pull a couple of mine but I didn’t get one of the refractors. Still eBay is a great source. 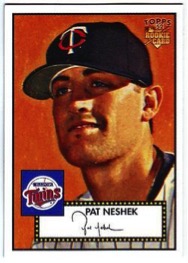 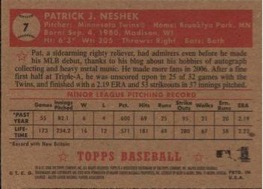 RB: What’s been your favorite baseball card of yourself?

PN:They made a short print card in 2007. I don’t know what quantity was released but it’s kind of a hard card to find. It was in Topps Heritage. I just don’t see many of them. People send autographs in and I maybe get two or three of them a year in the mail, so it’s pretty rare.

RB: What’s your favorite thing about that Heritage card??

PN: It’s scarcity. I tried to get a print run of them but they never gave it out. Whenever I see them, I usually buy them. You can usually get them for like three, four or five bucks. Sometimes you have to pay eight or nine. But there was like a hundred and ten short prints that year. I just don’t see the card so it’s a card I collect of myself.

RB: So Topps didn’t send you one directly?

PN: No, they never do. That’s the thing. People think we get boxes of them. No, you don’t get any. They’ll give you a check in spring training for $500 bucks for using your image. But no, we don’t get any from them. I have to buy my own usually or people will send them to me and I’ll give them out.

RB: How did you get into collecting?

PN: Like a lot of kids in the 80s, that was the cool thing to do. Then I kind of got away from it. But when I went to college, my roommate, he used to collect autographs a lot at hotels and after Triple A baseball games so I kind of tagged along a few nights and I thought it was really fun so I started getting into it a little bit. A lot of good stories, that’s what I enjoyed the most. 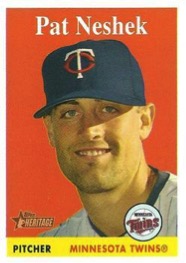 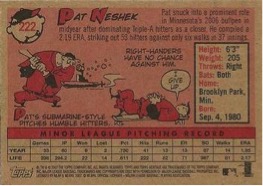 RB: It doesn’t seem like many players collect cards anymore.

PN: It’s weird. Certain guys collect certain things. I know with the Phillies, Howie Kendrick did a lot of bobbleheads from the 60s. A few guys did balls, some guys did jerseys. But not many guys collect. There’s a few guys who do cards. Brad Ziegler does it. Chris Perez did for a little bit. You kind of got to get to know each guy. I think a lot of guys do collect but they just don’t let it be known.

RB: It seems harder to get autographs from players than it used to be.

PN: It does. That’s why I started building a lot of these Topps sets to get signed. I think a lot of these guys are making a lot of money and it’s not worth their time to do a signing for $500 bucks and a lot of guys don’t do their mail so I don’t think it’ll be as easy as it was in the 70s and 80s with the fan interaction.

RB: What are your favorite sets?

PN: I love the old cardboard. I don’t like the new stuff with the gloss. I really like the Topps Heritage design. They’ll take it back 49 years so they’re doing 1968 this year. I’m looking forward to [2019 when] the 1970 set with the gray border comes out. I got the best PSA graded (original 1970 Topps) set in the world. I’ve been doing that for 11 years now. It’s hard. I always look for upgrades but they’re not out there. I’ll look forward to it in two years when they make that Heritage set.

RB: Do you have any favorite statistics on the back of cards?

PN: I liked it when I was a kid a lot because it helped you understand math and you could compute averages and make sure your work was right. The set building you get to know, I was born in 1980 but when I work on my 1970s sets I know a lot of who was on that team that year, where that guy’s been, what kind of hitter he was. And they had really cool cartoons back then. Some of the heritage do have good cartoons this year.

RB: Do you still chew the old gum?

PN: I did buy a box of Garbage Pail, built a really cool set of Garbage Pail Kids like eight years ago. I tried some of that gum… it was disgusting! Yeah, I bought like six boxes so when I got done. I think I put a picture on Twitter. It was pretty nasty. Some of it had brown stains on the gum. If you go back to the cellophane packs from the 1970, that gum is completely white. It can’t get any worse than that. It just turns into this candy cigarette chalk.

RB: When I was a kid, I’d buy packs, then boxes, then I’d skip and just buy the set. How do you collect sets these days?

PN: It depends. Like, if I’m in it, I’ll try to buy some of the boxes just to see what I crack open. It’s hard to pull some real nice stuff in some of those boxes. I’ve come to the point now where I’m relying on eBay and I’ll just wait for that card to come up. There’s a lot of really cool local sets. Especially in the 1950s, the dog food ones. It seems every restaurant had a local team set.

RB: If you could bring back one thing that was done on older baseball cards, what would that be?

PN: I want cardboard. Just real cardboard. I think that would change a lot of stuff for me. Maybe make the printing process not as good as it is. Some cards are off-center so it really makes it tough but fun to find nice gem mint cards. I like the gum in there. They tried that with Topps Heritage a few years ago but I think that’s more of a logistics thing where they try to ship so much and for such a cost that the gum kind of screws everything up. But I’d really like to see the cardboard come back. 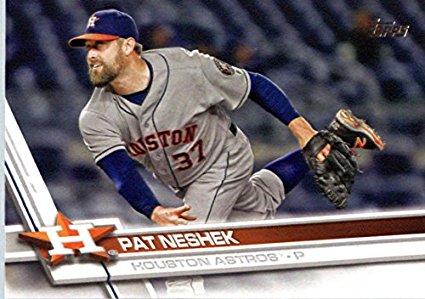 When I was in grade school in the mid 1980s, I lived in the San Francisco Bay Area. Sunnyvale, California to be precise. Back then, the Silicon Valley moniker was still in its infancy and really wasn’t all that well known outside of California. Before Apple, its claim to fame was the place Matthew Broderick tried to pirate video games from in the movie WarGames. Besides computers though, another hot craze in the area was baseball cards. That was driven by two real good teams, the Oakland A’s and the San Francisco Giants, and young rookie stars on each team to root for. If you were a Giant fan, Will Clark and Robby Thompson were at the top of your list. If you were a fan of the green and gold, those were the days it was cool to love Jose Canseco and Mark McGwire. But for many kid fans in the area, the rookie cards weren’t in the Topps, Fleer or Donruss sets. The “true rookies” were the Mother’s Cookies cards. Almost an equivalent to the rookie cards in the “Topps Traded” sets, Mother’s Cookies cards were available before the major companies main sets had been distributed. 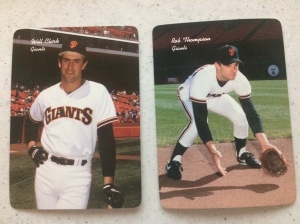 The cards had a unique look to them. They had a glossy, sleek finish at a time before Upper Deck existed. They also had distinctive rounded corners which, to a kid’s imagination, made them even more cool. They also were thinner than normal baseball card stock, which gave it that extra amount of “I have to be careful with this, so it must be valuable” vibe.

The backs of each card, curiously, didn’t have baseball statistics on them. However, underneath the miniature biography of each player, there was a line marked “Autograph”. We thought that was a neat way to provide player space to sign without messing up that nice glossy finish.

Not only did those cards look great and were truer “rookie” cards, but they were all the more epic because us kids weren’t quite sure how to get them. I mean, you didn’t just go to the local 7-Eleven and buy a pack. They weren’t even listed in baseball card guides like Beckett’s. Though rumors of their release would start early in the season, there was an air of mystery on if they actually existed, what they would look like once they came out, and who would be in the set. 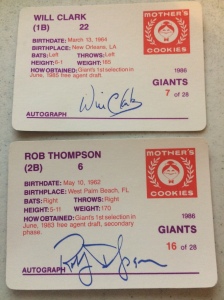 I traded for two cards, the Will Clark and Robby Thompson rookie cards from the 1986 set. Before and after games, there was a lot of baseball card trading as we waited for autographs.

And then, I got them autographed.

These days, because of the internet, there are blogs such as cardjunk to help clear up some of the mystery. There’s even a Wikipedia page that lets us glean a few more facts about them. The first two sets had been produced in 1952 and 1953, featuring only Pacific Coast League Players. That was it until the 1983 Mother’s Cookies Giants set came out. Other teams were added over the next decade until sets were being produced for the A’s, Angels, Astros, Dodgers, Giants, Mariners, Rangers and Padres. They also ran some commemorative sets for Nolan Ryan. They were distributed as occasional inserts in Mother’s Cookies or as giveaways at baseball games. The last baseball card set was in 1998 and apparently, Mother’s Cookies went out of business in 2008.

It’s ironic looking it up online decades after the cards were released. Even with modern technology, there are people still struggling to complete their sets. Nonetheless, though they’re still hard to find, they’re still as cool as they were when I was young.