My apologies for the cheesy headline.

In case you’ve never heard of the Bell Brand Dodgers baseball cards, they were small regional issues that were inserted into bags of Bell Brand potato chips and corn chips in 1958, 1960, 1961 and 1962. They’re yet another great oddball set for collectors of Sandy Koufax baseball cards to hunt down.

Along with the Morrell Meats issues, these are some of my favorites as a Koufax collector.

And speaking of the Morrell Meats cards, if you read my previous article about those issues, you’ll remember how I had been trying to find a copy of the 1959 Morrell Meats card for about five or six years with no luck. Well, within about three weeks of writing that article, one popped up on eBay and I instantly snagged it. Go figure! Maybe that article appeased the collecting gods or something, who knows?

Anyways, back to the Bell Brand cards.

Why Bell Brand skipped out on making a 1959 set, I don’t know. It’s been noted that the 1958 cards weren’t very popular and were pulled from production. So, it’s likely that they didn’t think it was worth producing a 1959 set. How I wish they would have made a 1959 issue–guess I’ll just have to daydream about what it may have looked like.

Since the Dodgers would go on to win the 1959 World Series, that was apparently enough to ramp up Bell Brand’s interest in producing cards again as they’d make three more sets from 1960 to 1962.

The cards were originally offered as free inserts inside bags of Bell Brand potato chips and corn chips. I’ve scoured the Internet for pictures of the actual bags in which they came but haven’t had any luck. If anyone comes across a picture I’d sure appreciate it if you could point me to it in the comments section below this article.

Given that they were placed inside potato chip and corn chip bags, you can imagine the wear they endured and how hard they can be to find in top condition. And even though they were wrapped in plastic, you’ll still frequently find copies that show evidence of contact with the potato chip oil.

In this picture of a wrapped 1962 Bell Brand Koufax, you can clearly see the oil stain along the lower lefthand border. 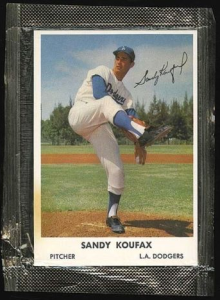 This is probably my favorite of the four Bell Brand Koufax cards. It’s not necessarily the best-looking, in my opinion, with its sepia color tone and somewhat foggy image of Koufax inside the picture frame border. But that unique design is what makes it easily standout from the other three. Its historic value is quite high, too, given this was Bell Brand’s way to contribute to the hype of the Dodgers first season in Los Angeles. One of my favorite parts of the card is actually the reverse side as it mentions his blinding speed and inexperience. His K/9 of roughly 10.6 in his 1957 season stat line was a hint of the dominance that was to come.

The Koufax card is the key to the 10-card set that featured fellow Hall of Famers Roy Campanella, Don Drysdale, Pee Wee Reese and Duke Snider. I usually see these in PSA 8 condition sell for $3,000 to $4,000. There are a couple of PSA 9 copies floating around somewhere and I’d love to watch the bidding on those if they ever come up for auction. 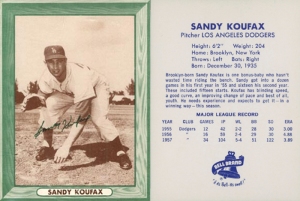 This is the second most difficult of the four to collect. Card #9 in the 20-card set features a young Koufax hunched over on the mound at the Dodgers spring training facility in Vero Beach, FL. The color photo is a big improvement over the 1958 sepia image but I wish the weather would have been nicer the day of the photo shoot. The cloud cover leaves the image with a gloomier feel compared to the sharp, bright images on the 1961 and 1962 cards. The back side mentions Koufax tying Bob Feller’s then record of 18 strikeouts in a game and offers clues as to which products featured these cards: bags of 39-cent, 49-cent, and 59-cent potato chips as well as 29-cent and 49-cent corn chips.

As a side note, Snider and Walter Alston are the only other two Hall of Famers in this much larger set. For some reason, Don Drysdale was dropped and wouldn’t appear again until the 1962 set. 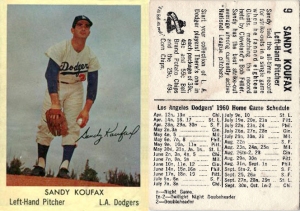 The 1961 Bell Brand Koufax card looks very similar to the 1960 issue except for the bluer sky and different camera angle. There were again 20 players in the set but you’ll notice that Koufax’s issue is actually #32 in the set. That’s because Bell Brand deviated from sequential numbering and went instead with a system that utilized each player’s jersey number. Confusing, maybe, but it earns a couple of points for creativity in my book. It’s a special card as it marked the first of his six-season run of absolutely torching the competition during the back half of his career. 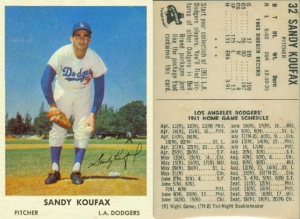 This would be the last year that Bell Brand would produce Dodgers baseball cards. And these were their highest quality print runs. The photos were higher resolution and were much glossier. The Dodgers would move from the Los Angeles Coliseum to pitcher-friendly Chavez Ravine in 1962 but unfortunately Koufax would not be able to enjoy a full season there due to injury. He would, however, throw the first of his four no-hitters in June that year and would earn “Player of the Month” distinction. Surprisingly, that was the only time in his career he had earned that title. 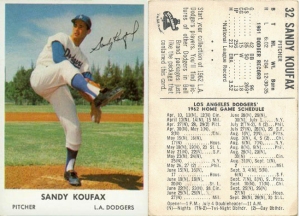 Oddball cards, yes. But the Bell Brand Koufax cards are some of the most fun and challenging to collect. Great imagery, huge historic value, and a small piece of regional Southern California history are enough to place these high on the list of any Koufax collector.

When you think of Sandy Koufax cards, which one comes to mind?

Most hobbyists would likely quickly envision his 1955 Topps rookie card. After all, that issue is iconic and one of the most valuable baseball cards in the entire hobby.

As a diehard Koufax collector, though, I tend to really enjoy some of his lesser-known cards. They’re harder to find. And they’re more challenging to find in high grade. So, for me, that gives them a boost in appeal.

Take his 1959-1961 Morrell Meats issues, for example. These cards are fairly rare–specifically the 1959.

Part of a three-year run as promotional cards released by the Morrell Meats company they were generally only available in the Southern California area. They were also served exclusively at Dodgers games at the Coliseum in during their pre-Chavez Ravine days.

Along with his Bell Brand Potato Chip cards (which I’ll write about separately in the future), they’re arguably his most recognizable regional issues.

Condition-sensitive doesn’t begin to describe these cards. If the full-color, borderless photos on the front weren’t fragile enough, the fact that the cards were packaged with hot dogs and sausage left them even more vulnerable to wear and tear.

Let’s take a look at each one and see what makes them different from each other:

The 1959 Morrell Meats series included 12 players in total with Koufax being the most important card in the set (the same can be said for the ’60 and ’61 issues). Koufax is pictured in his legendary #32 uniform posing as if he’s delivering another one of his famously terrifying fastballs. At the time, though, his fastball wasn’t exactly as terrifying as it was known for seeing as how he only struck out 173 that season and really didn’t become dominant until the 1961 season. As you’ll see in a bit, the photo used in the 1959 issue is the same as the 1961 issue, so the back is the easiest way to tell the difference between the two. The 1959 back doesn’t contain any statistics at all. It does, however, give a clue as to which products the cards came with: 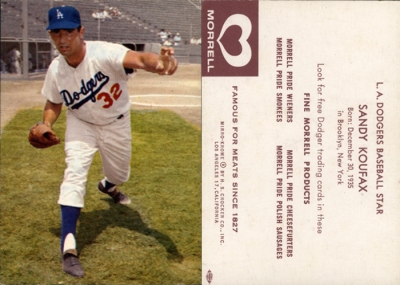 Another 12-card set, the 1960 Morell Meats cards were identical in size to the 1959 set, each measuring 2-1/2″ by 3-1/2″. But, as you can see, the photo of Koufax was different than the year before. A nice full-color image of Koufax is shown right where opposing hitters liked to see him: smiling and nowhere near a pitcher’s mound. Morrell included his statistics on the reverse, below his team, his name and personal information (height, weight, etc.). A 1960 Morrell Meats Koufax graded in PSA 9 mint condition sold for over $30k in 2007. An incredible price. Who knows what it would sell for today? 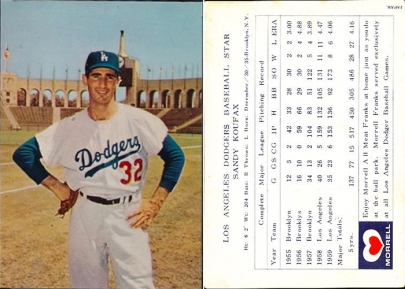 As mentioned previously, Morrell went with the same photo on its 1961 issue as it had used on the 1959 card. Again, the back is the key to telling the difference between the 1959 and 1961 issues. The layout of the 1961 back is almost identical to that of the 1960 issue except: 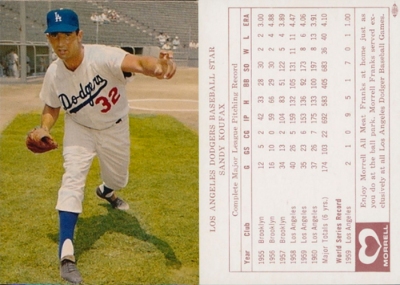 So just how rare are all three of these cards? This should give you some perspective:

As of this writing, according to PSA’s pop report, the following number of each card are currently in the grading company’s population:

So, obviously Morrell Meats cards don’t pop up too often. And when they do, you better jump on them. Take my word for it.

Earlier this year, Heritage Auctions auctioned off a copy of the 1959 Morrell Meats Koufax in PSA 5 condition…the highest grade currently in their population. So this was big news in the Koufax collecting community.

Too bad I found out about the auction in July. I am still kicking myself for not paying closer attention to each auction house’s schedules. (Side note: if you don’t know about Auction Report, their website can solve this problem for you. They do a great job at listing out most every major auction house’s schedules so you don’t make the same mistake I did and have a card you need slip by you).

Ugh…I’m still kicking myself over missing out on that ’59 Morrell Meats Koufax auction. I’ve been searching for this card for years. It ended up selling for $4,063 with buyer’s premium, though, so I guess I don’t feel too bad. There is no chance I would’ve been able to go that high.

Oh well, the search continues. Which is one of the best parts about this hobby in my opinion.