My vote for the best baseball cards that came with a food product are the Stouffer’s cards from the overlooked Legends of Baseball set from 1995.

When my kids were in grade school in the 1990’s we tried every frozen pizza product available before settling on the Stouffer’s offering as the best of the bunch.

In 1995 we increased our consumption Stouffer’s pizza due to the inclusion of one of 5 different baseball cards in each package. It is worth noting that every card is a hall of famer. The checklist is as follows:

These cleverly designed and well manufactured cards were just about the same size as a standard card, but with much thicker cardboard. Just about every surface of these cards contains either a photo and / or information about the ball player.

The front of the card has an action photo of the player. The caps and the uniforms have been airbrushed so the team logos and names are not visible.

The back contains a head shot with biographical information and airbrushed caps.

By slightly bending the card to loosen up the die cut of the player and then pulling the tab the front image of the player pops up and also revels the players career major league stats and a Legendary Moments write up.

There have been other cards with unique designs such as the 1955 Topps Double Headers and the 1964 Topps Stand-Ups, but the 1995 Stouffer’s cards with multiple moving parts are the best engineered baseball cards that have been issued to date.

The most amazing thing about this set was that by sending in a number of proof-of-purchase seals (can’t remember how many) from the box packaging you could get an autographed card of one of the hall of famers in the set.

When I sent in my proof-of-purchase seals, Stouffer’s sent me back an autographed Yogi Berra card along with a Certificate of Authenticity.

By doing a little searching on eBay you can put together an entire set of these cards for under $20.

I asked people to send me their “junk wax” faves at the end of this post on Fleer Classic Miniatures and I got a lot of solid suggestions. The 1985 Fun Foods set was one, and I took it to heart. I am now the proud owner of a complete 133 button set.

The beauty of this little item was not lost on me, but I never went for the whole set. Not a cost issue, the set should run $20 tops, more of a storage issue. Where would I put 133 buttons – in a box? In sheets? I really couldn’t figure it out, so I passed.

When I started pursuing the 1964 and 1971 Topps coins sets, I ended up with some coin sheets whose pockets were too small. Too small for the coins, but perfect for the buttons! (Never throw anything out!). Here’s how they display:

It’s a super attractive set – the colors are vibrant, the photos are sharp, the checklist is terrifically 1984/1985.

They’re thick enough that my binder won’t close now, but I’m not worried. It’s a binder full of metal discs, not cardboard. No bent corners here!

I won’t claim to doing much looking into this issue: they were sold as complete sets and in packs of three, though I never saw those packs in the wild. As to Fun Foods, I have no idea what they did, or made, or how much fun their product may or may not have been. Maybe all they made were the buttons, maybe the buttons were meant to be eaten. I have no idea (though don’t do that.)

Whatever business Fun Foods was in is of no matter to me. They made cool buttons, I now have them all, and that’s enough for me.

This is my third post featuring Spanish-language baseball cards released in the United States. Previous posts are:

Where the previous post covered Pacific’s “flagship” Spanish-language sets, this post will touch on some of their other Spanish-language sets. This isn’t meant to be a definitive list but rather a recognition that Pacific had other, smaller sets—general release, inserts, oddballs, etc.—which were also aimed at a Spanish-speaking market. These are what I’ve encountered so far and I know there are many more issues out there. 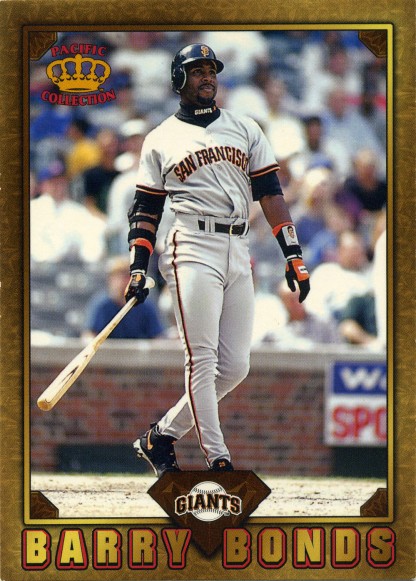 From what I can tell the 1997 Gems of the Diamond is a 200-count insert set for a 150-count base set—in this case Pacific Prisms. In 1994 Prisms were the insert set but from 1995–1997 Pacific Prisms was a 144-card set with all kinds of crazy stuff going on on the fronts and a sentence in Spanish about the players on the backs. In 1999 the mark returned but as an English-language set.

In many ways the Gems of the Diamond insert set is more interesting from a Spanish-language point of view since it includes a lot more text about the players. The copy on this Bonds card interests me because it feels like it was written in English first and then translated to Spanish since it uses evocative words like “smacked” and “tallied” in English while in Spanish it just repeats “conectó” (literally, connected) when describing his home run hitting.

In 1998 the Gems of the Diamond set became an insert for Pacific’s Invincible line. This was the same deal as Prisms where the insert set outnumbered the base cards.* It looks like Invincible took over from Prisms since the invincible line ran from 1998–2000 and featured a different flavor of over-the-top designs.

*While not the point of this post I’m beginning to wonder when an insert set stops being something I can conceive of as an “insert.”

Less biographic text this year and there are now stats on the back. Stats are in English which really stands out when the text references them in Spanish.

While I don’t have any of those tricked-out Prism cards I do have some Invincible cards. This one from 1999 has a weird translucent circle which features the player headshot so you can see him in mirror-image on the card back. Or maybe the point is you can hold the card up to the light and get a bit of a slide effect. I don’t know.

I don’t have much to note on the Spanish language usage here except to point out that the positions are in English. It’s weird, in many ways Prism and Invincible are both cards lines which would be better served by not having any text on the backs and just embracing themselves as two-sided graphic design. The only reason to have text on many of these is so you know which side is the front. 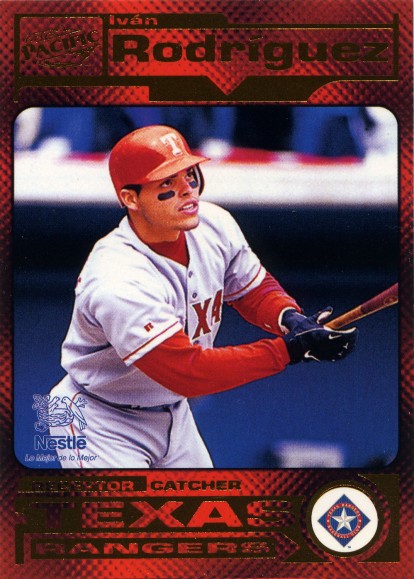 Be still my beating heart. In 1998 Pacific partnered with Nestlé on an oddball set. I’ve been unable to find out much about how the set was released but it’s a pretty good checklist featuring twenty Latino stars.

Five of the cards are a distinct design and function as something like inserts. The fronts don’t scan well because of all the foil but they’re distinct among all the cards I’ve seen in having bilingual position information. This is a pretty regular feature on Pacific’s backs but is a lot of information to include on the fronts. Sadly the team names are the English version as I would’ve loved to have had a Vigilantes card instead of a Rangers card.

The backs meanwhile continue to feature English-language stats. Given the size of the type being used for the statistic categories this is kind of a disappointing use of space and it would’ve been fun to see bilingual stats here too. 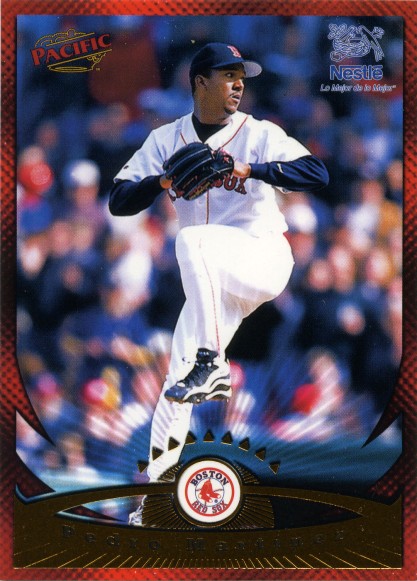 The other fifteen cards are what I guess you’d call the base design. No position information on these fronts and the same huge English-language stats on the back. I do appreciate how the smaller, italic font is used for English though. Still readable but very clear these are primarily for the Spanish-language market.

Induction 2017 is over. It was a great weekend and I could tell you stories about chatting with Tim Raines, joking with Randy Johnson, welcoming back a healthy Rod Carew, sharing a beer with Bill Lee on my front porch and having my son meet Frank Thomas, but I won’t. There will be plenty of names to drop along the way, but let’s talk cards.

It’s a generally held belief that Cooperstown baseball shops are card shops. Not so. Most of the shops are cap, t-shirt, jersey and autograph places. That’s not to say that those don’t have a smattering of cards, but there are only a few stores that are card stores at their core.

The days leading up to, and including, Induction were filled with baseball cards. Some of my houseguest friends are card people, so we took a daily walk to Baseball Nostalgia in the Doubleday Field parking lot. I wasn’t looking for autographed cards, but I never really do. Still, I buy the ones that catch my eye and there are ones that always catch my eye. 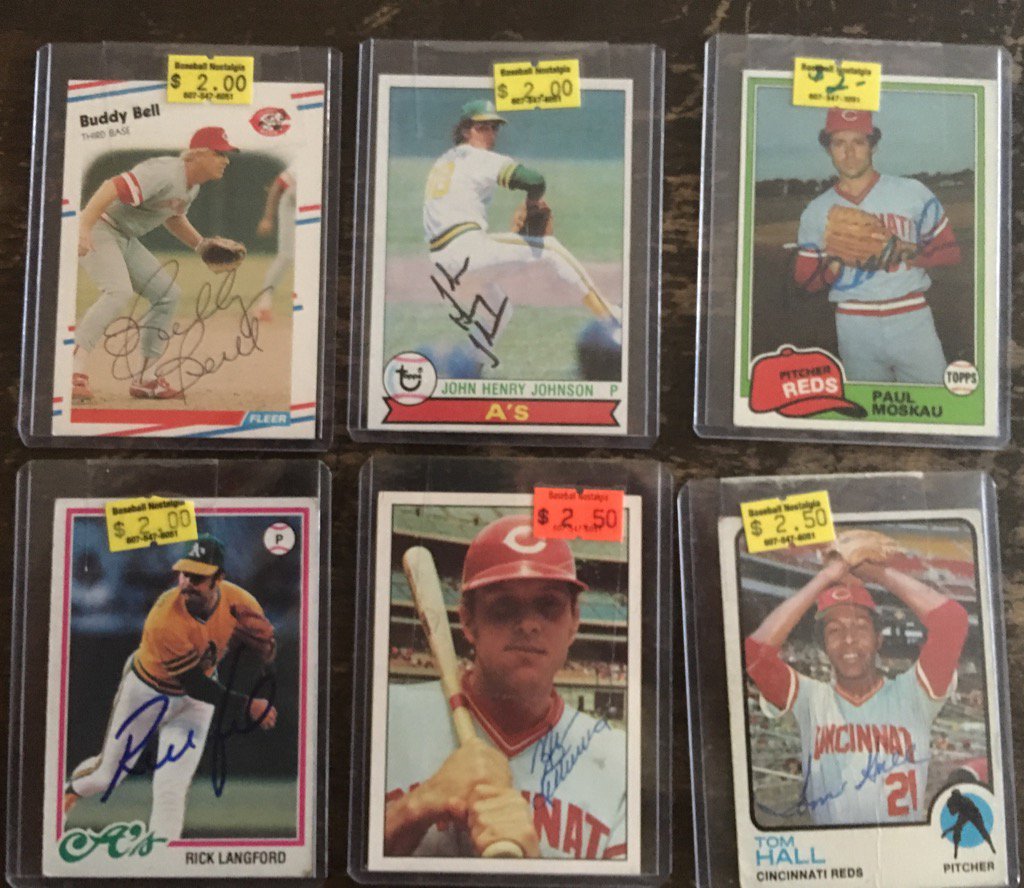 Jimmy, who comes for Induction every year, brought with him an unopened box of 1990 Upper Deck. It was the hit of the weekend. People tore open packs, shouting when they got a Tim Raines, puzzled when they got a Chuck Cary.

On Friday night, after a big Hall party, my wife and I went to a bash put on by some of our Canadian friends. Cooperstown was invaded from the north, but they were the friendliest hordes. The first person I saw when I got to the house was Bill Lee. His wife showed me a bottle of Bill Lee wine, which had the coolest baseball card label. Better yet, the label is his business/baseball card.

Lee and a bunch of ex-‘Spos were signing for charity on Saturday. After a few seconds with Dennis Boyd, I hovered around my pal Jonah Keri who was signing books and his Allen & Ginter card, which I had to have. Plus, the money went to a good cause. (Explanation of autograph – Jonah says he’s often told this picture makes him look like some Eastern European politico).

Jay Jaffe was in town signing his new The Cooperstown Casebook. With each book, Jay handed out a card of the book cover. Rookies, a company that makes custom cards, made some for Split Season as well. People really dig them.

The Raines party was on Saturday night and it was a cardboard filled extravaganza. There was a collage of all his cards (Jimmy noted one was missing, a 1996 something or other), there were cards in the goodie bags and, best of all, cookie cards. This is the first card I’ve eaten since gnawing on a 1964 Eddie Bressoud when I was almost 2.

Lots of cards each and every day and that doesn’t even count some 1933 Tattoo Orbit and 1956 and 1960 Topps that I got in the mail. There’s a big pile on my dresser that sorely needs to be put away.

Oh, did I mention I chatted with Tim Raines, joked with Randy Johnson, welcomed back a healthy Rod Carew, shared a beer with Bill Lee on my front porch and had my son meet Frank Thomas? 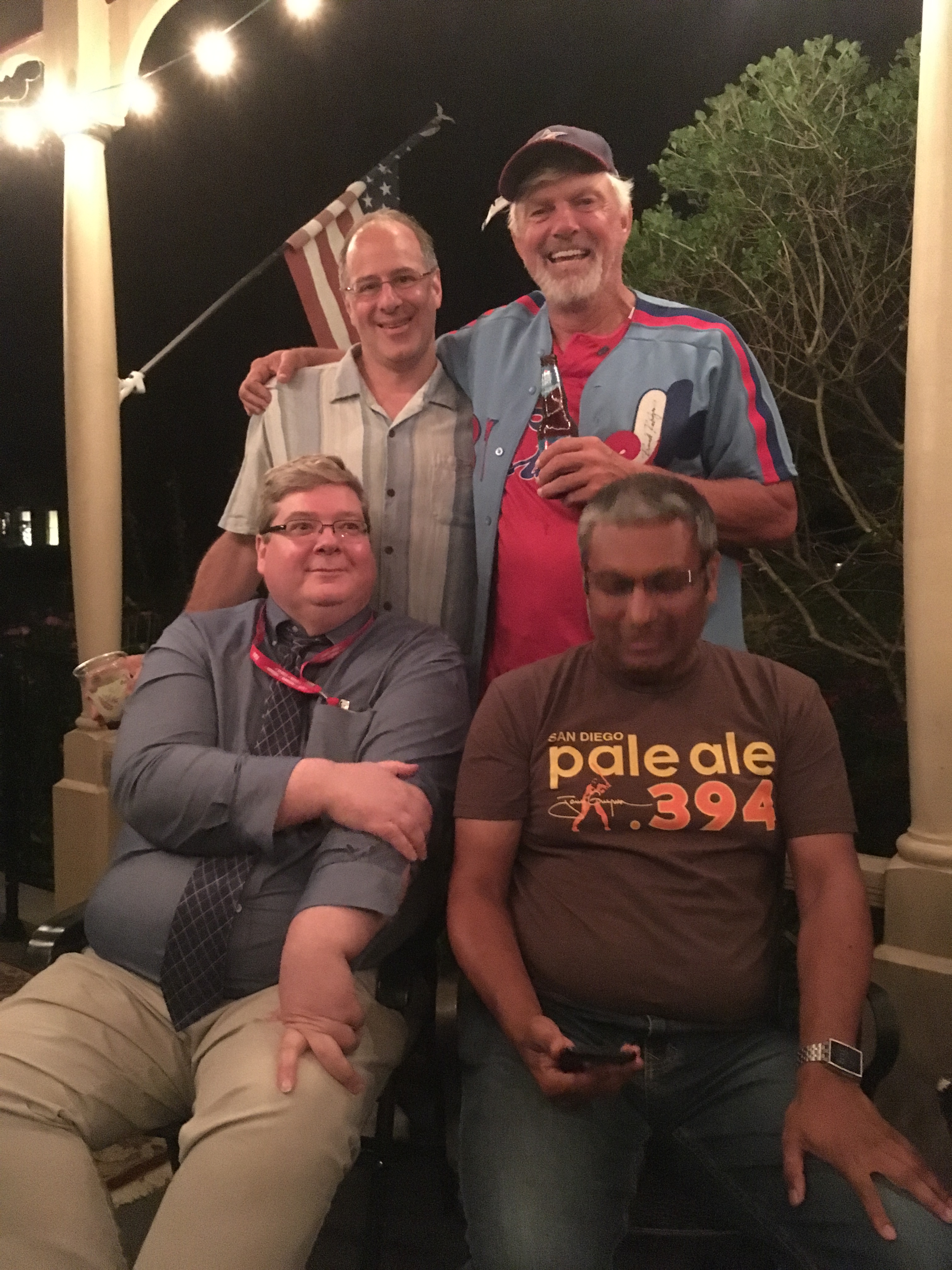