I pride myself on my memory. When I shop for records, I know at a glance what I have and what I don’t. Same thing for books. Believe me, it’s not that easy to keep such things mentally cataloged when you have thousands of each.

Same holds true for cards. The “got it, got it, need it, need it” knowledge runs deep for me. So, whenever I slip up in life, memory wise, it gets me down. I’m only 55 (almost!) but not having 100% infallible recall worries me.

When I started looking at older sets to finish, searching for those that were reasonably within striking distance, I completely forgot about the 1936 Goudey Wide Pens, Type 1. I was putting some cards away recently and came across them, pages and pages of them. It’s not that I didn’t know I had some; I didn’t know how many and have little memory of when and why I was so into them. 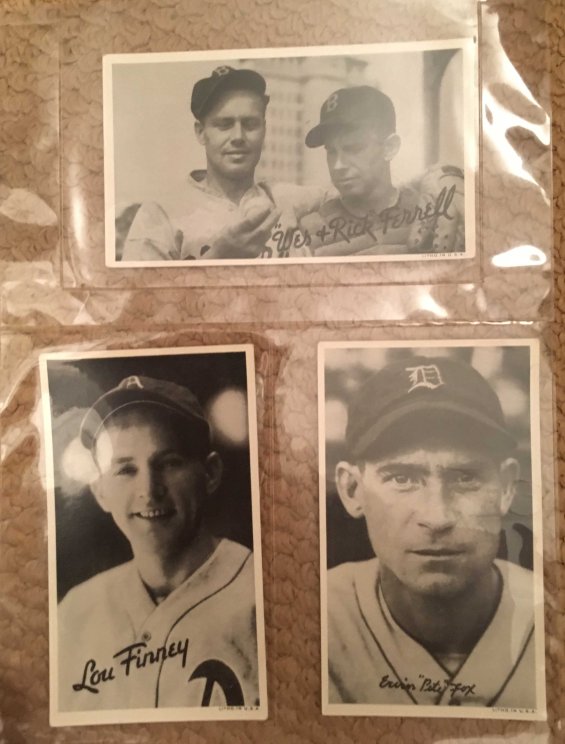 Turns out I have 70% of the set, 83 of 120, so add another set to the project list. It’s an interesting checklist. Granted, there were only 16 teams back then, but the amount of dross in the roster  is amazing. There is a quasi-DiMaggio rookie card (he’s pictured with Joe McCarthy) and a Hank Greenberg card (of course, I don’t have either), and there are a good amount of Hall of Famers (Gehringer, Waner and Waner, you get the idea) but there are so many people I’ve never heard of. Never. That’s odd.

Odder still is why a blah pitcher named Clydell Castleman has two cards. Two! Greenberg and Gabby Hartnett  only get one each and they were the reigning MVPs. Even John Thorn, MLB Historian, was at a loss when I Tweeted out to him. “Called Slick for some reason…” he offered. That’s something I suppose. Good ol’ Clydell was not much. Even when he won 15 games for the 1935 Giants, he had a mere 0.5 WAR. No one at Goudey knew that. He was out of baseball at 25 years old. 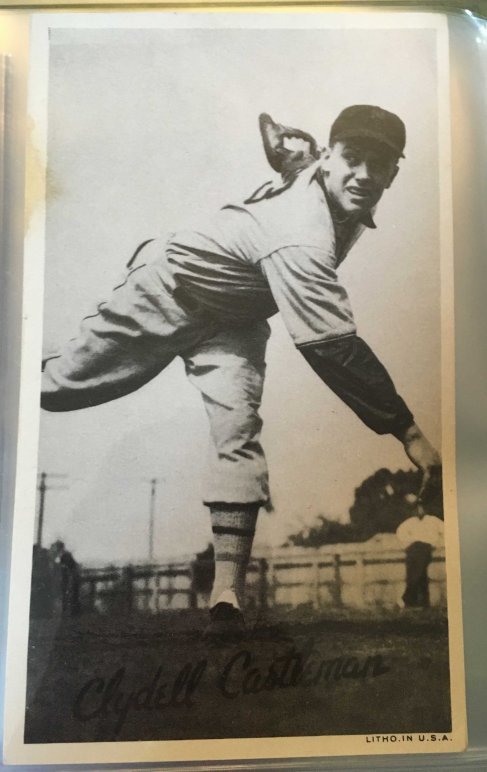 Besides the less than thrilling checklist, hunting these cards down takes a bit of extra attention. There are three different types of 1936 Wide Pens and two more types in 1937. It can be confusing, but, for those of you keeping score at home, Type 1 have borders and “LITHO IN U.S.A.” printed on the bottom

I’ll admit that the set is not very nice. Seems I have a penchant for unattractive sets, according to some who have said as much when I go on about the 1949 Bowman and 1933 Tattoo Orbit cards. Pretty or not, finishing a set from the 1930’s would be pretty cool, so I’m going for it. Thankfully, no one seems to care for these cards very much. Low supply meets low demand so all cards, even the high priced ones, are not so expensive in EX condition as to be out of reach. 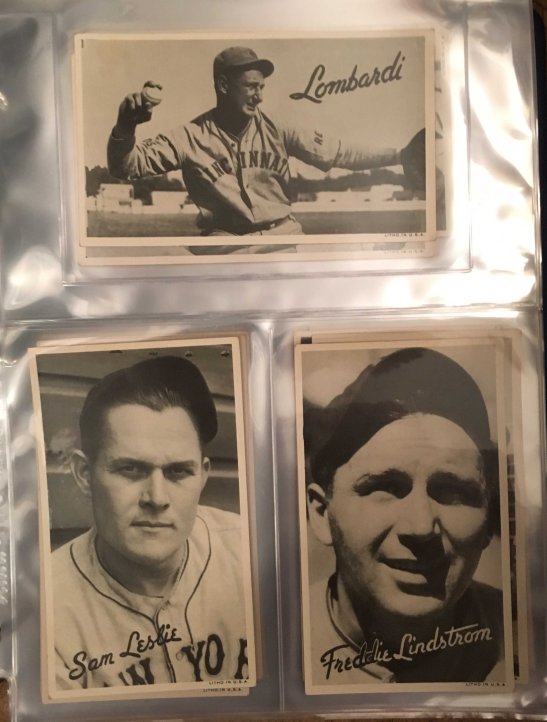 But, as I pursue these cards, is the chase for Ed Moriarty and Tommy Padden going to knock more important information out of my head? It’s a risk I’m prepared to take.

One year ago, as 2015 was approaching 2016, I was having a conversation on Twitter with some fellow collectors about our collecting goals for 2016. I had not made goals in previous years nor had I made any for the upcoming year. As a disciple of the Yoda-like collecting legend Eric, also known as @ThoseBackPages on Twitter, I have been trained in the ways of #FOCUS and buy the card not the holder so a list of goals was an idea I liked very much.

Following that conversation I scribbled six goals on a sticky note and stuck it on my above my computer screen where I could see it each day. The goals I set for 2016 are as follows. 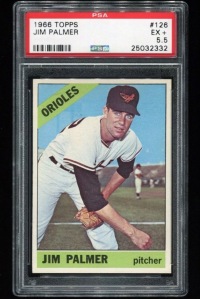 The first goal I was able to complete was the Palmer RC, I picked up a nice example of this card graded PSA 5.5 EX+ in early February. It is an excellent example of buying the card not the grade as the eye appeal is that of a much higher graded card at a much lower price.

The second, third and fifth goals completed were done rather easily as I underestimated the value of the Twitter collecting community in tracking down the people who have some of the tougher signed cards to find available. I reached 65% on the 1959 Topps set in early April with the purchase of signed Billy Consolo and Alex Kellner cards. Nearly two months later I crossed the 55% pole of the 1984 Topps sets with the addition of Gerald Perry and Ron Reed. The 1981 Fleer goal was reached sometime in August, and for the life of me I can’t find the details of which card pushed me over. Looking back as a whole these three goals were undershot by a significant amount as currently stand at roughly 72%, 81%, and 68% in ascending chronological order. 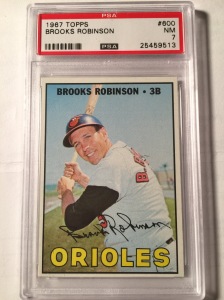 The fourth and from my view most difficult goal to reach was the 1967 Brooks Robinson in the PSA 7 grade. The card itself is both a high number and short print, and it is also prone to being off-center. Being a tougher card to find in excellent condition, I found it difficult to find one at a price I could live with. Finally after being snipped in several auctions I got a hold of the 67 Robinson in late July.

The often neglected and last completed goal was to reach the 50% mark of my low grade 1934 Goudey set. I completed this goal in late September with a flurry of eBay purchases from a seller I found who did not overvalue these well-loved cards solely because of their age.

Looking back on this journey I feel that it helped me focus and to keep from splurging on cards that didn’t necessarily fit my collections. I have a few goals already in mind for 2017 number one being a 1957 Brooks Robinson rookie card graded PSA 7. 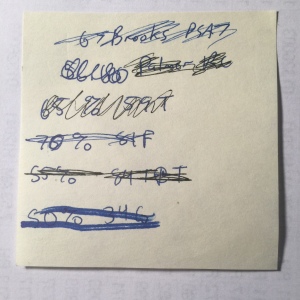 I’m a man of my word. I keep my promises and I achieve my goals. I don’t get distracted, I stay on task and I always finish what I start. Except…

My income and my passion for cards were at similar peaks throughout the ‘90’s. I finished some old sets I was close to finishing, started some older sets from scratch. There were four sets that I jumpstarted my way into with a series of well-priced, shrewdly purchased lots, and I had every intention of making my way to the end, the final check made in each one’s checklist. I don’t know what derailed me from my goals. Maybe it was the new century and big life changes (job switches, moving to Cooperstown, and so on), maybe it was the changes in the hobby (shifts to grading, disappearance of commons into slabs, moving to Cooperstown, far from big Chicago area card shows), maybe I simply lost interest in those sets. Let’s find out. 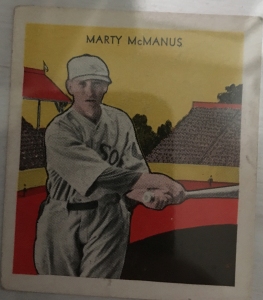 There’s something about this size, 2” X 2 ¼,” that grabs me. Tattoo Orbit (or R305, if you want to get technical) is a beautiful little set, 60 cards in all, hyper-stylized. The player photo is slightly colorized and is ensconced in a background that looks like it could have been drawn by a child. Check out Marty McManus here, swinging away, gigantic, in a setting of magnificent red and yellow. It’s a thing of beauty.

I have 16 of the 60, including two of the short prints. Did I ever think I’d really go the distance on this one? In retrospect, I’m not so sure. The set, even in VG, is around $4,000, probably more if I hunt and peck for individual cards. I don’t like spending a ton, so my guess is this one was a bit of a whim, a “yeah, sure, I’ll put this together over time.” Looking at what I’ve got, and how prices have gone up since I began, it’s even less likely I’ll get back to this one. But they are wonderful cards, magnificently simple in design. 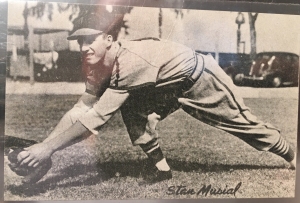 I’m halfway to the 44 card set of baseball players (though there are also 4 boxer cards). Not sure how these came into my field of vision, but it seems that in the 1980’s a large number of these black and white gems were found in a warehouse and released into the hobby. Maybe that’s why I got so many, definitely why the big time Hall of Famers (Musial, Williams, Jackie Robinson) are relatively inexpensive).

There’s a chance I’ll go back to this set. There are many wonders to be found in the photographs. Stan the Man here looks like he accidentally fielded a grounder during a photo shoot for the new 1947 Packard. Still, hunting down ungraded Joe DiMaggio and Jackie Robinson cards may be a tough task and, it seems like after 2000, a rash of illegally reprinted square cornered cards (some come rounded) made their way not only into the hobby but into grading.  That worries me, though I wonder where the money is in counterfeiting 70-year-old Del Ennis cards. 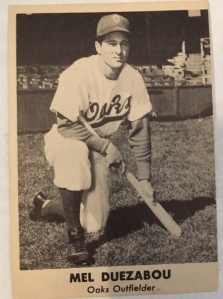 What’s with the bread cards? Sure, it makes sense to package cards with gum, kids chewing away as they read about their favorite players, but the image of a kid wadding a piece of white bread in his cheek is one I can’t shake. The poor little Oaklander would choke!

There are 42 cards in this set, a strangely sized 2” X 3.” They’re thin stuff, very flexible, but sort of cool. There’s a Billy Martin card, which I don’t have, but is pretty inexpensive in EX, the general grade of the 11 cards I have.

I’ve been scouting out the balance of the set on EBay and it looks like there are ungraded examples at reasonable prices. Completing this set may be a reasonable endeavor, but it’s awfully hard to muster up a real enthusiasm for chasing down an EX example of Maurice Van Robays, whoever the hell he was. Still, I look at my Mel Duezabou card and know that, to someone, he was important. I’m not sure that that someone is me. 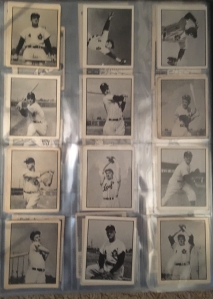 This may be the one that got away and that calls me back the most. Almost exactly the size of the 1949 Bowman cards that I love, this 100 card set of Canadian International Leaguers (Montreal Royals, Toronto Maple Leafs and Ottawa Athletics) is filled with unknowns and a healthy subset of drawings like “Gripping the Bat.” Look at this page – awesome, right?

Though I have half the set, I have none of the key cards, minor league appearances by Tommy Lasorda, Walter Alston and Johnny Podres. They won’t break the bank. I think if I fish around for these, I’m likely to find one or two sellers/dealers who would sell me a bunch at a reasonable price. What could the real demand for the no-names and sketches be? Then I’ll back myself into a corner and spring for the higher priced cards. That’s my methodology – go cheap for as long as I can and then force myself to pony up for the few costlier cards that stand between me and a complete set.

I’ve never been a type collector of random cards, never sought out having one from as many sets as possible, so having four partial sets drives me batty. Is it worth keeping what I have if I’m not going to get them all? I don’t know, I debate that a lot. What’s the point of having 51 of 100 1952 Parkhursts if I’m not going to end up with 100? It’s a small scale struggle, but a struggle nonetheless.